As told by some of Scotland's best writers, and illustrated with thousands of images from the collections of the city's world-famous libraries, museums and universities. From football to fashions, Auchenshuggle to Yoker, you'll find it all here. Find out more
Bess of Hardwick's Letters brings together, for the first time, the remarkable letters written to and from Bess of Hardwick (c.1521/2 or 1527-1608), one of Elizabethan England's most famous figures. Find out more
The University of Glasgow’s Historical Thesaurus of English is a unique resource charting the development of meaning in the huge and varied vocabulary of English. It consists of almost every recorded word in English from Anglo-Saxon times to the present day, all arranged into detailed hierarchies of meaning. Find out more
The resource includes historical research for all Berwickshire place-names on the Ordnance Survey 1:50,000 Landranger map, including more than 1,600 place-names and 7,000 historical forms presented via a series of interactive maps. Find out more
James McNeill Whistler (1834-1903) was a major figure in 19th century printmaking and created 490 etchings. Over 9500 impressions of these prints have been located and investigated during the project, which completes a series of catalogues raisonnés of Whistler's oeuvre. Find out more
The Scots Syntax Atlas presents the results of over 100,000+ acceptability judgments from over 500 speakers on over 250 morphosyntactic phenomena. The Atlas also contains a text-to-sound aligned corpus of spoken data totalling 275 hours and over 3 million words. Find out more
The Scottish Corpora project has created large electronic corpora of written and spoken texts for the languages of Scotland, featuring nearly 4.6 million words of text, with audio recordings to accompany many of the spoken texts. Find out more
The project provides a richly-illustrated Catalogue of all known architectural projects by Charles Rennie Mackintosh, including over 1200 drawings by Mackintosh and the practice, analytical and contextual essays, a timeline and glossary. Find out more
A publicly accessible, online scholarly edition of one of the most important archives of eighteenth-century medical "consultation letters", containing more than 20,000 digitised pages. Find out more
A database of all known people of Scotland between 1093 and 1314 mentioned in over 8600 contemporary documents. It is also being extended to 1371 to include all those lands, peoples and relationships mentioned in royal charters between 1314 and 1371. Find out more

It was a three-day week as Thursday and Friday were bank holidays for the Queen’s Platinum Jubilee.  I spent most of the available time working on the Books and Borrowers project.  I had a chat with RA Alex Deans about the data for the Chambers Library sub-project that we’re hoping to launch in July.  Although this data is already in the system it needs additional latitude and longitude data so we can position borrowers on an interactive map.  We decided to add this data and some other data using the ‘additional fields’ system in the CMS and Alex is hopefully going to get this done by next week.

I’d made a start on the API for the project last week, and this week I completed the endpoint that displays all of the data that will be needed for the ‘Browse Libraries’ page, which can be accessed as JSON or CSV data.  This includes counts of registers, borrowing records, books and borrowers plus a breakdown of the number of borrowings per year at each library that will be used for the stacked column chart.  The systems reside on servers at Stirling University, and their setup has the database on a different server to the code.  This means there is an overhead when sending queries to the database as each one needs to be sent as an HTTP request rather than dealt with locally.  This has led me to be a bit more efficient when constructing queries.  For example, rather than running individual ‘count’ queries for each library after running an initial query to retrieve all library details I’ve instead used subqueries as part of the initial query so all the data including the counts gets processed and returned by the database via one HTTP request.

With the data retrieval aspects of the ‘browse libraries’ page completed I then moved on to developing the page itself.  It has an introductory section (with placeholder text for now) then a map showing the locations of the libraries.  Any libraries that currently have lat/lng data appear on this map.  The markers are clustered when zoomed out, with the number referring to the number of libraries in the cluster.  I selected a map design that I thought fitted in with the site, but this might change, and I used an open book icon for the library map marker on a red background (to match the site’s header text colour) and again this may change.  You can hover over a marker to see the library name and press on a marker to open a popup containing a link to the library, the library name and alternative names, location, foundation date, type and statistics about registers, books, borrowers and records.

Beneath the map is a tabular view of the data.  This is the exact same data as is found on the map.  Library names are buttons leading to the library’s page.  You can change the order of the table by pressing on a heading (e.g. to see which library has the most books).  Pressing a second time reverses the order.  Below is a screenshot showing the map and the table, with the table ordered by number of borrowing records: 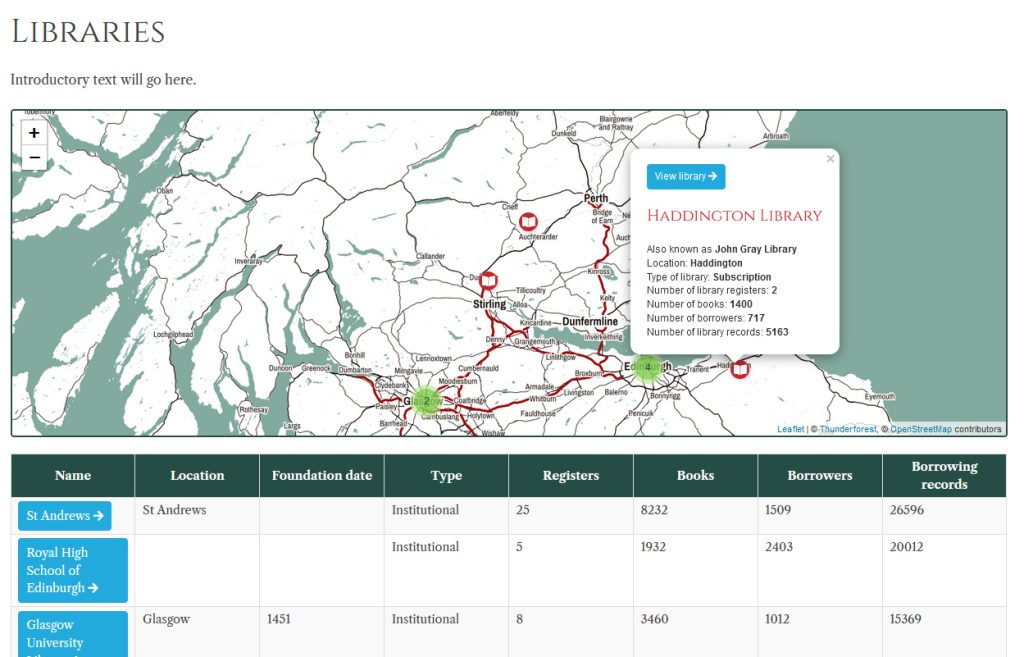 Beneath the table is a stacked column chart showing borrowings at the libraries over time that I created using the extremely useful HighCharts JavaScript library (See https://www.highcharts.com/demo).  At the moment the borrowing records start somewhere between 1700 and 1710 and end somewhere between 1890 and 1899.  Actually, there are some borrowing records beyond even this but are presumably mistakes (e.g. one had a year of ‘179’ or something like that).  As generating a graph with a bar for each year would result in about 200 bars I decided this wasn’t feasible and instead grouped borrowings into decades.  This sort of works, but we still have many decades at the start and end that only have a few records, but we may limit the decades we focus on.  We’re also visualising the data from 18 libraries in the chart, which is a lot.  This takes up a lot of space under the chart (where you can hover over a name to highlight the data in the bars).  However, you can open the menu to view the chart full screen, which makes it more legible.  You can also view the year data in a table by selecting the ‘data table’ option.  Below is a screenshot of the bar chart: 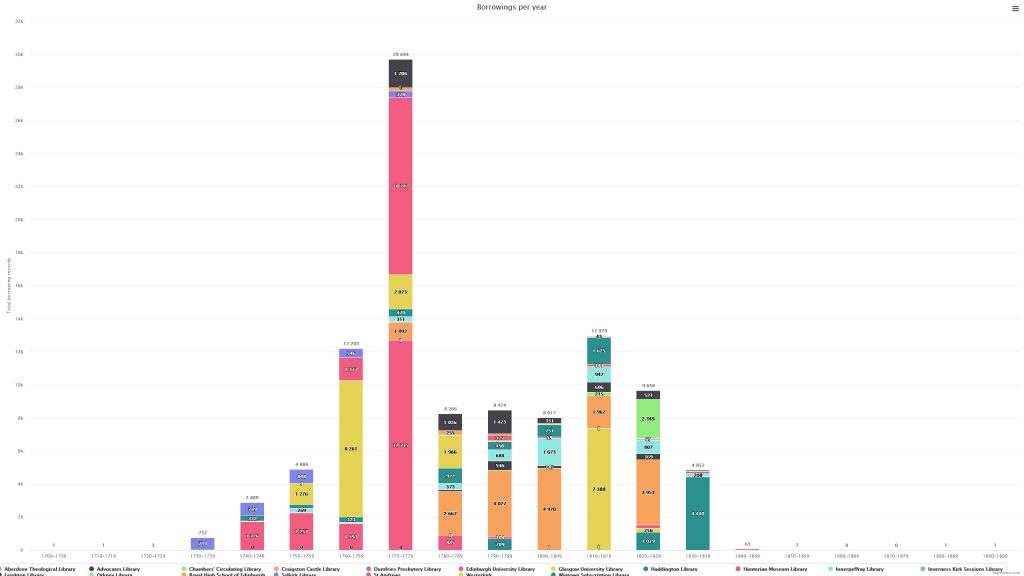 There are a couple of things I could do to make this more legible if required.  Firstly, we could use a stacked bar chart instead (https://www.highcharts.com/demo/bar-stacked).  The years would then be on the y-axis and we could have a very long chart with all of the years in place rather than aggregating to decades.  This would make it more difficult to view the legend and the x-axis tick marks, as you would need to scroll down to see them.  Secondly, we could stick with the decade view but then give the user the option of selecting a decade to view a new chart featuring the individual years in that decade.  This would make it harder for users to get the big picture all at once, although I guess the decade view would give that.

Also this week I checked up on the Speak For Yersel website, as we had sent the URL out to people with an interest in the Scots language at the end of last week.  When I checked on Wednesday we’d had 168 registered users.  These users had submitted 8,110 answers for the main questions plus 85 for the ‘drag onto map’ and 85 for the transcript.  606 of those main answers are from people who have chosen ‘outside Scotland’.  I also realised that I’d set the markers to be smaller if there were more than 100 answers on a map but the markers looked too small so I’ve updated things to make them the same size no matter how many answers there are.

My other main task for the week was to finalise the transfer of the Uist Saints website.  We managed to get the domain name ownership transferred over to Glasgow and paid the subscription fee for the next nine years and the version of the site hosted at Glasgow can now be found here: https://uistsaints.co.uk/