The Digital Catalogue documents, visually and textually, the first ten years of Andy Goldsworthy's ephemeral, outdoor practice. It replicates Goldsworthy's Slide Cabinet Index, and includes previously unpublished material from Goldsworthy's Sketchbook Diaries. Find out more
The Metaphor Map of English shows the metaphorical links which have been identified between different areas of meaning. These links can be from the Anglo-Saxon period right up to the present day so the map covers 1300 years of the English language. Find out more
The University of Glasgow’s Historical Thesaurus of English is a unique resource charting the development of meaning in the huge and varied vocabulary of English. It consists of almost every recorded word in English from Anglo-Saxon times to the present day, all arranged into detailed hierarchies of meaning. Find out more
The resource includes historical research for all Berwickshire place-names on the Ordnance Survey 1:50,000 Landranger map, including more than 1,600 place-names and 7,000 historical forms presented via a series of interactive maps. Find out more
A database of all known people of Scotland between 1093 and 1314 mentioned in over 8600 contemporary documents. It is also being extended to 1371 to include all those lands, peoples and relationships mentioned in royal charters between 1314 and 1371. Find out more
A publicly accessible, online scholarly edition of one of the most important archives of eighteenth-century medical "consultation letters", containing more than 20,000 digitised pages. Find out more
The online catalogue includes some 550 oil paintings and over 1700 works on paper dating from ca 1850 to 1903. The evolution of each painting from sketch to final oil is described and illustrated. Find out more
Bess of Hardwick's Letters brings together, for the first time, the remarkable letters written to and from Bess of Hardwick (c.1521/2 or 1527-1608), one of Elizabethan England's most famous figures. Find out more
The Scots Syntax Atlas presents the results of over 100,000+ acceptability judgments from over 500 speakers on over 250 morphosyntactic phenomena. The Atlas also contains a text-to-sound aligned corpus of spoken data totalling 275 hours and over 3 million words. Find out more
James McNeill Whistler (1834-1903) was a major figure in 19th century printmaking and created 490 etchings. Over 9500 impressions of these prints have been located and investigated during the project, which completes a series of catalogues raisonnés of Whistler's oeuvre. Find out more

I split my time over many different projects this week.  For the Books and Borrowing project I completed the work I started last week on processing the Wigtown data, writing a little script that amalgamated borrowing records that had the same page order number on any page.  These occurrences arose when multiple volumes of a book were borrowed by a person at the same time and each volume was recorded separately.  My script worked perfectly and many such records were amalgamated.

I then moved onto incorporating images of register pages from Leighton into the CMS.  This proved to be a rather complicated process for one of the four registers as around 30 pages for the register had already been manually created in the CMS and had borrowing records associated with them.  However, these pages had been created in a somewhat random order, starting at folio number 25 and mostly being in order down to 43, at which point the numbers are all over the place, presumably because the pages were created in the order that they were transcribed.    As it stands the CMS relies on the ‘page ID’ order when generating lists of pages as ‘Folio Number’ isn’t necessarily in numerical order (e.g. front / back matter with Roman numerals).  If out of sequence pages crop up a lot we may have to think about adding a new ‘page order’ column, or possibly use the ‘previous’ and ‘next’ IDs to ascertain the order pages should be displayed.  After some discussion with the team it looks like pages are usually created in page order and Leighton is an unusual case, so we can keep using the auto-incrementing page ID for listing pages in the contents page.  I therefore generated a fresh batch of pages for the Leighton register then moved the borrowing records from the existing mixed up pages to the appropriate new page, then deleted the existing pages so everything is all in order.

For the Speak For Yersel project I created a new exercise whereby users are presented with a map of Scotland divided into 12 geographical areas and there are eight map markers in a box in the sea to the east of Scotland.  Each marker is clickable, and clicking on it plays a sound file.  Each marker is also draggable and after listening to the sound file the user should then drag the marker to whichever area they think the speaker in the sound file is from.  After dragging all of the markers the user can then press a ‘check answers’ button to see which they got right, and press a ‘view correct locations’ button which animates the markers to their correct locations on the map.  It was a lot of fun making the exercise and I think it works pretty well.  It’s still just an initial version and no doubt we will be changing it, but here’s a screenshot of how it currently looks (with one answer correct and the rest incorrect): 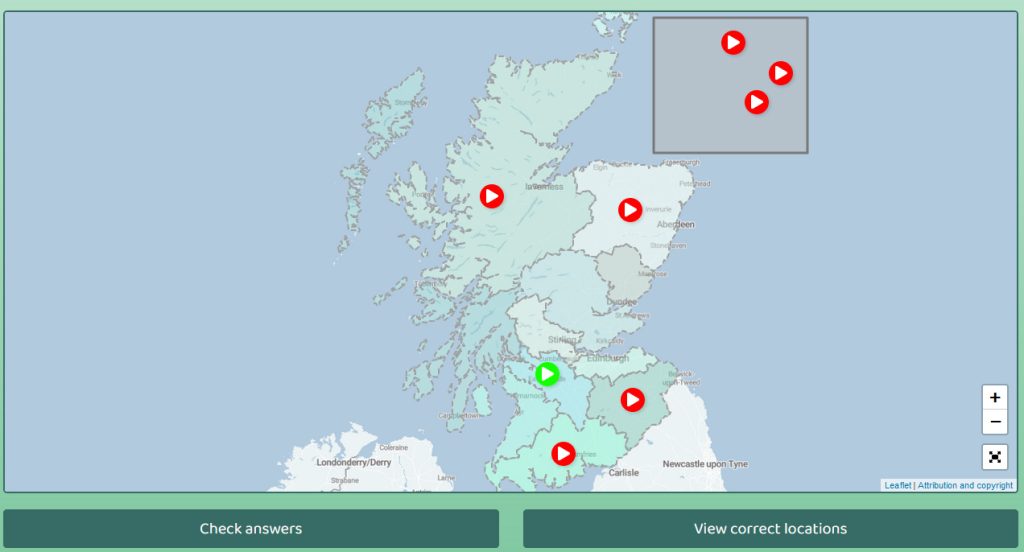 For the Speech Star project I made some further changes to the speech database.  Videos no longer autoplay, as requested.  Also, the tables now feature checkboxes beside them.  You can select up to four videos by pressing on these checkboxes.  If you select more than four the earliest one you pressed is deselected, keeping a maximum of four no matter how many checkboxes you try to click on.  When at least one checkbox is pressed the tab contents will slide down and a button labelled ‘Open selected videos’ will appear.  If you press on this a wider popup will open, containing all of your chosen videos and the metadata about each.  This has required quite a lot of reworking to implement, but it seemed to be working well, until I realised that while the multiple videos load and play successfully in Firefox, in Chrome and MS Edge (which is based on Chrome) only the final video loads in properly, with only audio playing on the other videos.  I’ll need to investigate this further next week.  But here’s a screenshot of how things look in Firefox: 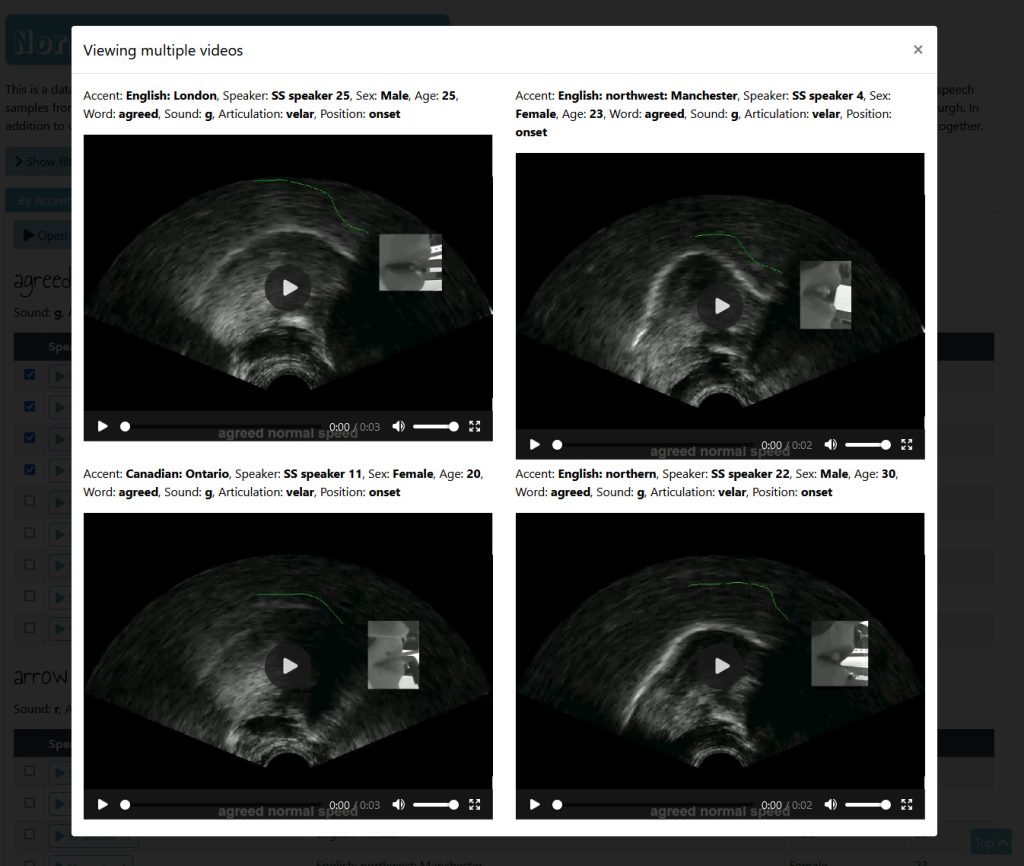 Also this week I spoke to Thomas Clancy about the Place-names of Iona project, including discussing how the front-end map will function (Thomas wants an option to view all data on a single map, which should work although we may need to add in clustering at higher zoom levels.  We also discussed how to handle external links and what to do about the elements database, that includes a lot of irrelevant elements from other projects.

I also had an email conversation with Ophira Gamliel in Theology about a proposal she’s putting together that will involve an interactive map, gave some advice to Diane Scott about cookie policy pages, worked with Raymond in Arts IT Support to fix an issue with a server update that was affecting the playback of videos on the Seeing Speech and Dynamic Dialects websites and updated a script that Fraser Dallachy needed access to for his work on a Scots Thesaurus.

Finally, I had some email conversations with the DSL people and made an update to the interface of the new DSL website to incorporate an ‘abbreviations’ button, which links to the appropriate DOST or SND abbreviations page.