The Metaphor Map of English shows the metaphorical links which have been identified between different areas of meaning. These links can be from the Anglo-Saxon period right up to the present day so the map covers 1300 years of the English language. Find out more
The Scottish Corpora project has created large electronic corpora of written and spoken texts for the languages of Scotland, featuring nearly 4.6 million words of text, with audio recordings to accompany many of the spoken texts. Find out more
As told by some of Scotland's best writers, and illustrated with thousands of images from the collections of the city's world-famous libraries, museums and universities. From football to fashions, Auchenshuggle to Yoker, you'll find it all here. Find out more
The resource includes historical research for all Berwickshire place-names on the Ordnance Survey 1:50,000 Landranger map, including more than 1,600 place-names and 7,000 historical forms presented via a series of interactive maps. Find out more
A database of all known people of Scotland between 1093 and 1314 mentioned in over 8600 contemporary documents. It is also being extended to 1371 to include all those lands, peoples and relationships mentioned in royal charters between 1314 and 1371. Find out more
The resource provides ultrasound tongue imaging (UTI) and lip video of speech, magnetic resonance imaging (MRI) video of speech, and 2D midsagittal head animations based on MRI and UTI data. Find out more
The Scots Syntax Atlas presents the results of over 100,000+ acceptability judgments from over 500 speakers on over 250 morphosyntactic phenomena. The Atlas also contains a text-to-sound aligned corpus of spoken data totalling 275 hours and over 3 million words. Find out more
The online catalogue includes some 550 oil paintings and over 1700 works on paper dating from ca 1850 to 1903. The evolution of each painting from sketch to final oil is described and illustrated. Find out more
James McNeill Whistler (1834-1903) was a major figure in 19th century printmaking and created 490 etchings. Over 9500 impressions of these prints have been located and investigated during the project, which completes a series of catalogues raisonnés of Whistler's oeuvre. Find out more
The project provides a richly-illustrated Catalogue of all known architectural projects by Charles Rennie Mackintosh, including over 1200 drawings by Mackintosh and the practice, analytical and contextual essays, a timeline and glossary. Find out more

I divided my time mostly between three projects this week:  Speech Star, Speak For Yersel and a Burns mini-project for Kirsteen McCue.  For Speech Star I set up the project’s website, based on our mockup number 9 (which still needs work) and completed an initial version of the speech database.   As with the Dynamic Dialects accent chart (https://www.dynamicdialects.ac.uk/accent-chart/) , there are limiting options and any combination of these can be selected.  The page refreshes after each selection is made and the contents of the other drop-down lists vary depending on the option that is selected.  As requested, there are 6 limiting options (accent, sex, age range, sound, articulation and position).

I created two ‘views’ of the data that are available in different tabs on the page.  The first is ‘By Accent’ which lists all data by region.  Within each region there is a table for each speaker with columns for the word that’s spoken and its corresponding sound, articulation and position.  Users can press on a column heading to order the table by that column.  Pressing again reverses the order.  Note that this only affects the current table and not those of other speakers.  Users can also press on the button in the ‘Word’ column to open a popup containing the video, which automatically plays.  Pressing any part of the browser window outside of the popup closes the popup and stops the video, as does pressing on the ‘X’ icon in the top-right of the popup.

The ‘By Prompt’ tab presents exactly the same data, but arranged by the word that’s spoken rather than by accent.  This allows you to quickly access the videos for all speakers if you’re interested in hearing a particular sound.  Note that the limit options apply equally to both tabs and are ‘remembered’ if you switch from one tab to the other.

The main reason I created the two-tab layout is to give users the bi-directional access to video clips that the Dynamic Dialects Accent Chart offers without ending up with a table that is far too long for most screens, especially mobile screens.  One thing I haven’t included yet is the option to view multiple video clips side by side.  I remember this was discussed as a possibility some time ago but I need to discuss this further with the rest of the team to understand how they would like it to function.  Below is a screenshot of the database, but note that the interface is still just a mockup and all elements such as the logo, fonts and colours will likely change before the site launches: 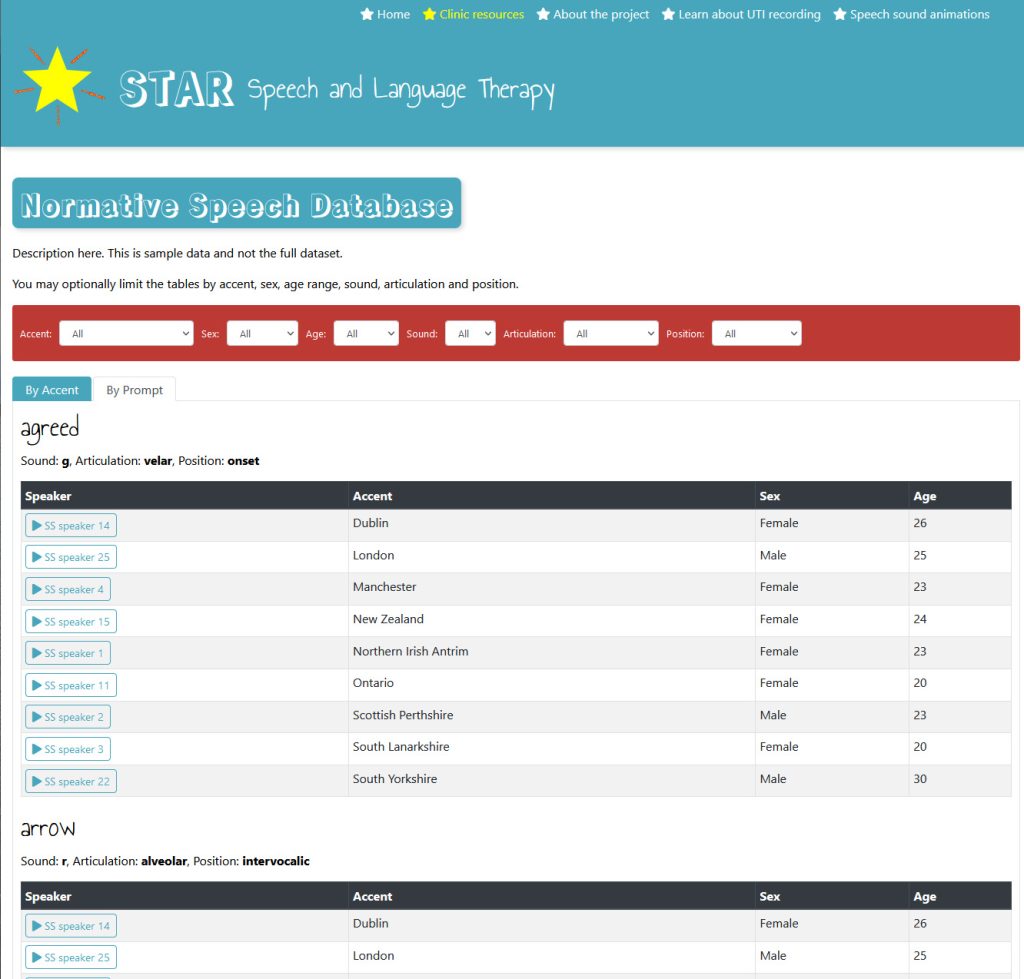 For the Speak For Yersel project I also created an initial project website using our latest mockup template and I migrated both sample activities over to the new site.  At the moment the ‘Home’ and ‘About’ pages just have some sample blocks of text I’ve taken from SCOSYA.  The ‘Activities’ page provides links to the ‘grammar’ and ‘click’ exercises which mostly work in the same way as in the old mockups with a couple of differences that took some time to implement.

Firstly, the ‘grammar’ exercise now features actual interactive maps throughout the various stages.  These are the sample maps I created previously that feature large numbers of randomly positioned markers and local authority boundaries.  I also added a ‘fullscreen’ option to the bottom-right of each map (the same as SCOSYA) to give people the option of viewing a larger version of the map.  Here’s an example of how the grammar exercise now looks: 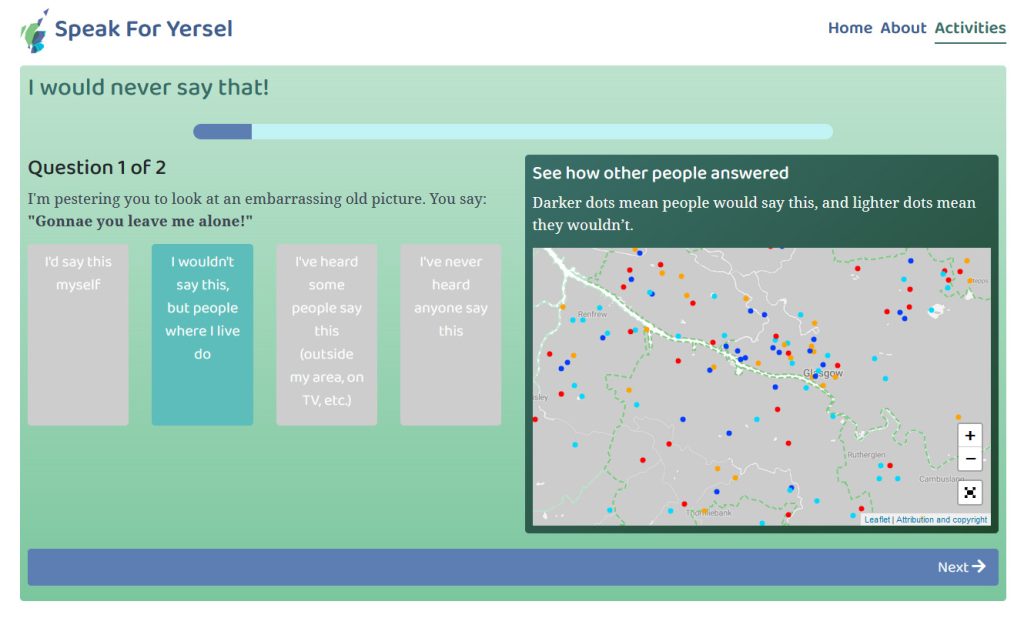 I also updated the ‘click’ exercise so that is uses the new page design.  Behind the scenes I also amalgamated the individual JavaScript and CSS files I’d been using for the different exercise mockups into single files that share functions and elements.  Here’s an example of how the ‘click’ exercise looks now: 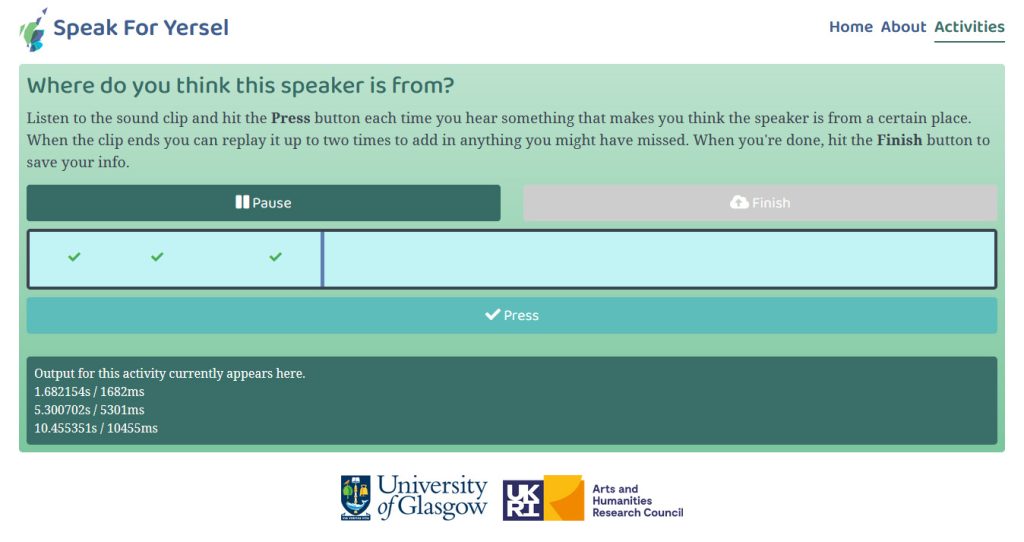 The Burns mini-project for Kirsteen involved manuscript scores for around 100 pieces of music in PDF format and metadata about these pieces as a spreadsheet.  I needed to make a webpage featuring a tabular interface with links to the PDFs.  This involved writing a script to rename the PDFs as they had filenames containing characters that are problematic for web servers, such as colons, apostrophes and ampersands.  I then wrote another script to process the Excel spreadsheet in order to generate the required HTML table.  I uploaded the PDFs to WordPress and created a page for the table.  I also needed to add in a little bit of JavaScript to handle the reordering of the table columns.  I have given the URL for the page to Kirsteen for feedback before we make the feature live.

Also this week I gave some further advice to the students who are migrating the IJOSTS journal. Fixed an issue with some data in the Old English Thesaurus for Jane Roberts and responded to an enquiry about the English Language Twitter account.