Bess of Hardwick's Letters brings together, for the first time, the remarkable letters written to and from Bess of Hardwick (c.1521/2 or 1527-1608), one of Elizabethan England's most famous figures. Find out more
The Scots Syntax Atlas presents the results of over 100,000+ acceptability judgments from over 500 speakers on over 250 morphosyntactic phenomena. The Atlas also contains a text-to-sound aligned corpus of spoken data totalling 275 hours and over 3 million words. Find out more
The resource provides ultrasound tongue imaging (UTI) and lip video of speech, magnetic resonance imaging (MRI) video of speech, and 2D midsagittal head animations based on MRI and UTI data. Find out more
As told by some of Scotland's best writers, and illustrated with thousands of images from the collections of the city's world-famous libraries, museums and universities. From football to fashions, Auchenshuggle to Yoker, you'll find it all here. Find out more
The online catalogue includes some 550 oil paintings and over 1700 works on paper dating from ca 1850 to 1903. The evolution of each painting from sketch to final oil is described and illustrated. Find out more
The Digital Catalogue documents, visually and textually, the first ten years of Andy Goldsworthy's ephemeral, outdoor practice. It replicates Goldsworthy's Slide Cabinet Index, and includes previously unpublished material from Goldsworthy's Sketchbook Diaries. Find out more
James McNeill Whistler (1834-1903) was a major figure in 19th century printmaking and created 490 etchings. Over 9500 impressions of these prints have been located and investigated during the project, which completes a series of catalogues raisonnés of Whistler's oeuvre. Find out more
A publicly accessible, online scholarly edition of one of the most important archives of eighteenth-century medical "consultation letters", containing more than 20,000 digitised pages. Find out more
The project provides a richly-illustrated Catalogue of all known architectural projects by Charles Rennie Mackintosh, including over 1200 drawings by Mackintosh and the practice, analytical and contextual essays, a timeline and glossary. Find out more
The Metaphor Map of English shows the metaphorical links which have been identified between different areas of meaning. These links can be from the Anglo-Saxon period right up to the present day so the map covers 1300 years of the English language. Find out more

I participated in the UCU strike action on Wednesday to Friday this week, so it was a two-day working week for me.  During this time I gave some help to the students who are migrating the International Journal of Scottish Theatre and Screen and talked to Gerry Carruthers about another project he’s hoping to put together.  I also passed on information about the DNS update to the DSL’s IT people, added a link to the DSL’s new YouTube site to the footer of the DSL site and dealt with a query regarding accessing the DSL’s Google Analytics data.  I also spoke with Luca about arranging a meeting with him and his line manager to discuss digital humanities across the college and updated the listings for several Android apps that I created a few years ago that had been taken down due to their information being out of date.  As central IT services now manages the University Android account I hadn’t received notifications that this was going to take place.  Hopefully the updates have done the trick now.

Other than this I made some further updates to the Anglo-Norman Dictionary’s locution search that I created last week.  This included changing the ordering to list results by the word that was search for rather than by headword, changing the way the search works so that a wildcard search such as ‘te*’ now matches the start of any word in the locution phrase rather than just the first work and fixing a number of bugs that had been spotted.

I spent the rest of my available time starting to work on an interactive version of the radar diagram for the Historical Thesaurus.  I’d made a static version of this a couple of months ago which looks at a the words in an HT category by part of speech and visualises how the numbers of words in each POS change over time.  What I needed to do was find a way to allow users to select their own categories to visualise.  We had decided to use the broader Thematic Categories for the feature rather than regular HT categories so my first task was to create a Thematic Category browser from ‘AA The World’ to ‘BK Leisure’.  It took a bit of time to rework the existing HT category browser to work with thematic categories, and also to then enable the selection of multiple categories by pressing on the category name.  Selected categories appear to the right of the browser, and I added in an option to remove a selected category if required.  With this in place I began work on the code to actually grab and process the data for the selected categories.  This finds all lexemes and their associated dates for each lexeme in each HT category in each of the selected thematic categories.  For now the data is just returned and I’m still in the middle of processing the dates to work out which period each word needs to appear in.  I’ll hopefully find some time to continue with this next week.  Here’s a screenshot of the browser: 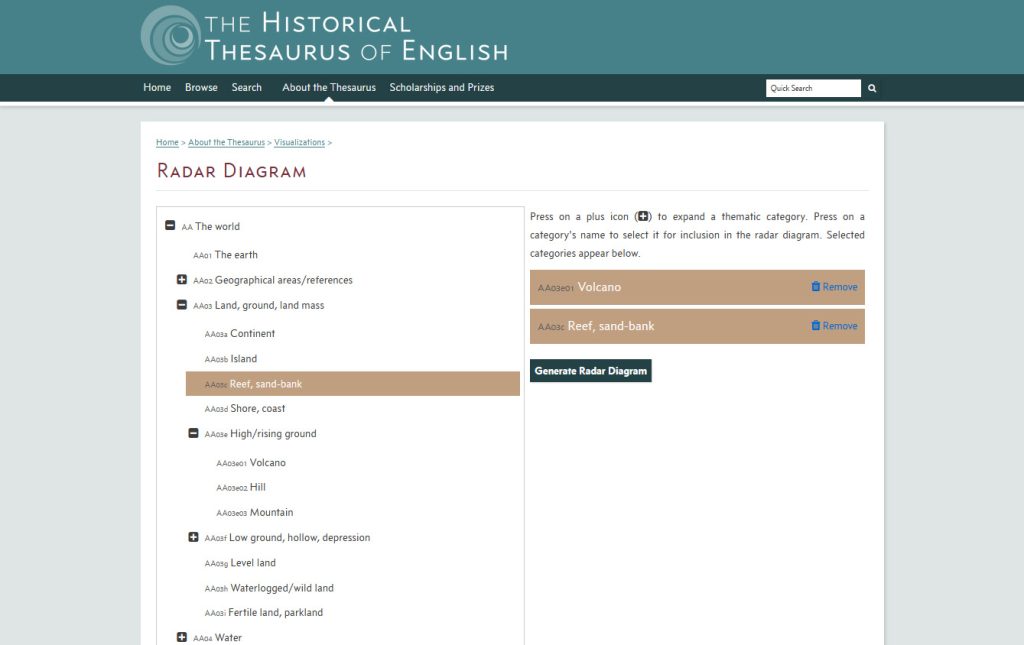