The Digital Catalogue documents, visually and textually, the first ten years of Andy Goldsworthy's ephemeral, outdoor practice. It replicates Goldsworthy's Slide Cabinet Index, and includes previously unpublished material from Goldsworthy's Sketchbook Diaries. Find out more
The Scots Syntax Atlas presents the results of over 100,000+ acceptability judgments from over 500 speakers on over 250 morphosyntactic phenomena. The Atlas also contains a text-to-sound aligned corpus of spoken data totalling 275 hours and over 3 million words. Find out more
Bess of Hardwick's Letters brings together, for the first time, the remarkable letters written to and from Bess of Hardwick (c.1521/2 or 1527-1608), one of Elizabethan England's most famous figures. Find out more
The University of Glasgow’s Historical Thesaurus of English is a unique resource charting the development of meaning in the huge and varied vocabulary of English. It consists of almost every recorded word in English from Anglo-Saxon times to the present day, all arranged into detailed hierarchies of meaning. Find out more
The resource includes historical research for all Berwickshire place-names on the Ordnance Survey 1:50,000 Landranger map, including more than 1,600 place-names and 7,000 historical forms presented via a series of interactive maps. Find out more
The project explores Romantic-period accounts of journeys into Wales and Scotland with a focus on the writings of the Flintshire naturalist and antiquarian Thomas Pennant (1726-1798), whose published Tours of both countries did so much to awaken public interest in the ‘peripheries’ of Britain. Find out more
The Metaphor Map of English shows the metaphorical links which have been identified between different areas of meaning. These links can be from the Anglo-Saxon period right up to the present day so the map covers 1300 years of the English language. Find out more
The project provides a richly-illustrated Catalogue of all known architectural projects by Charles Rennie Mackintosh, including over 1200 drawings by Mackintosh and the practice, analytical and contextual essays, a timeline and glossary. Find out more
The resource provides ultrasound tongue imaging (UTI) and lip video of speech, magnetic resonance imaging (MRI) video of speech, and 2D midsagittal head animations based on MRI and UTI data. Find out more
A database of all known people of Scotland between 1093 and 1314 mentioned in over 8600 contemporary documents. It is also being extended to 1371 to include all those lands, peoples and relationships mentioned in royal charters between 1314 and 1371. Find out more

I came down with some sort of stomach bug on Sunday and was off work with it on Monday and Tuesday.  Thankfully I was feeling well again by Wednesday and managed to cram quite a lot into the three remaining days of the week.  I spent about a day working on the Data Management Plan for the new Curious Travellers proposal, sending out a first draft on Wednesday afternoon and dealing with responses to the draft during the rest of the week.  I also had some discussions with the Dictionaries of the Scots Language’s IT people about updating the DNS record regarding emails, responded to a query about the technology behind the SCOTS corpus, updated the images used in the mockups of the STAR website and created the ‘attendees only’ page for the Iona Placenames conference and added some content to it.  I also had a conversation with one of the Books and Borrowing researchers about trimming out the blank pages from the recent page image upload, and I’ll need to write a script to implement this next week.

My main task of the week was to develop a test version of the ‘where is the speaker from?’ exercise for the Speak For Yersel project.  This exercise involves the user listening to an audio clip and pressing a button each time they hear something that identifies the speaker as being from a particular area.  In order to create this I needed to generate my own progress bar that tracks the recording as it’s played, implement ‘play’ and ‘pause’ buttons, implement a button that when pressed grabs the current point in the audio playback and places a marker in the progress bar, and implement a means of extrapolating the exact times of the button press to specific sections of the transcription of the audio file so we can ascertain which section contains the feature the user noted.

It took quite some planning and experimentation to get the various aspects of the feature working, but I managed to complete an initial version that I’m pretty pleased with.  It will still need a lot of work but it demonstrates that we will be able to create such an exercise.  The interface design is not final, it’s just there as a starting point, using the Bootstrap framework (https://getbootstrap.com), the colours from the SCOSYA logo and a couple of fonts from Google Fonts (https://fonts.google.com).  There is a big black bar with a sort of orange vertical line on the right.  Underneath this is the ‘Play’ button and what I’ve called the ‘Log’ button (but we probably want to think of something better).  I’ve used icons from Font Awesome (https://fontawesome.com/) including a speech bubble icon in the ‘log’ button.

As discussed previously, when you press the ‘Play’ button the audio plays and the orange line starts moving across the black area.  The ‘Play’ button also turns into a ‘Pause’ button.  The greyed out ‘Log’ button becomes active when the audio is playing.  If you press the ‘Log’ button a speech bubble icon is added to the black area at the point where the orange ‘needle’ is.

For now the exact log times are outputted in the footer area.  Once the audio clip finishes the ‘Play’ button becomes a ‘Start again’ button.  Pressing on this clears the speech bubble icons and the footer and starts the audio from the beginning again.  The log is also processed.  Currently 1 second is taken off each click time to account for thinking and clicking.  I’ve extracted the data from the transcript of the audio and manually converted it into JSON data which is more easily processed by JavaScript.  Each ‘block’ consists of an ID, the transcribed content and the start and end times of the block in milliseconds.

For the time being for each click the script looks through the transcript data to find an entry where the click time is between the entry’s start and end times.  A tally of clicks for each transcript entry is then stored. This then gets outputted in the footer so you can see how things are getting worked out.  This is of course just test data – we’ll need smaller transcript areas for the real thing.  Currently nothing gets submitted to the server or stored – it’s all just processed in the browser.  I’ve tested the page out in several browsers in Windows, on my iPad and on my Android phone and the interface works perfectly well on mobile phone screens.  Below is a screenshot showing audio playback and four linguistic features ‘logged’: 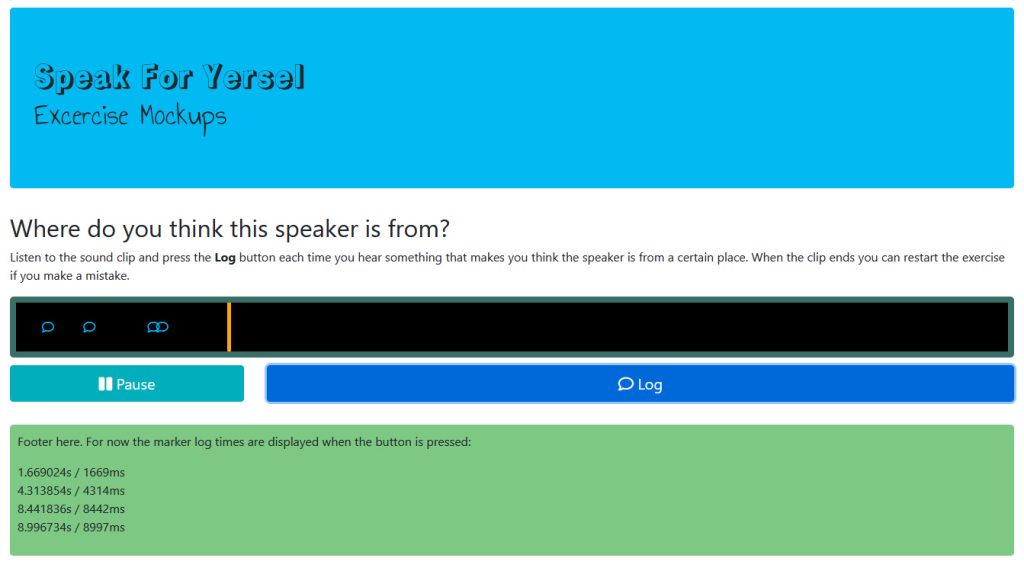 Also this week I had a conversation with the editor of the AND about updating the varlist dates.  I also updated the DTD to allow the new ‘usevardate’ attribute to be used to identify occasions where a varlist date should be used as the earliest citation date.  We also became aware that a small number of entries in the online dictionary are referencing an old DTD on the wrong server so I updated these.