The resource provides ultrasound tongue imaging (UTI) and lip video of speech, magnetic resonance imaging (MRI) video of speech, and 2D midsagittal head animations based on MRI and UTI data. Find out more
The University of Glasgow’s Historical Thesaurus of English is a unique resource charting the development of meaning in the huge and varied vocabulary of English. It consists of almost every recorded word in English from Anglo-Saxon times to the present day, all arranged into detailed hierarchies of meaning. Find out more
Bess of Hardwick's Letters brings together, for the first time, the remarkable letters written to and from Bess of Hardwick (c.1521/2 or 1527-1608), one of Elizabethan England's most famous figures. Find out more
The project provides a richly-illustrated Catalogue of all known architectural projects by Charles Rennie Mackintosh, including over 1200 drawings by Mackintosh and the practice, analytical and contextual essays, a timeline and glossary. Find out more
The resource includes historical research for all Berwickshire place-names on the Ordnance Survey 1:50,000 Landranger map, including more than 1,600 place-names and 7,000 historical forms presented via a series of interactive maps. Find out more
The project explores Romantic-period accounts of journeys into Wales and Scotland with a focus on the writings of the Flintshire naturalist and antiquarian Thomas Pennant (1726-1798), whose published Tours of both countries did so much to awaken public interest in the ‘peripheries’ of Britain. Find out more
A database of all known people of Scotland between 1093 and 1314 mentioned in over 8600 contemporary documents. It is also being extended to 1371 to include all those lands, peoples and relationships mentioned in royal charters between 1314 and 1371. Find out more
The Metaphor Map of English shows the metaphorical links which have been identified between different areas of meaning. These links can be from the Anglo-Saxon period right up to the present day so the map covers 1300 years of the English language. Find out more
As told by some of Scotland's best writers, and illustrated with thousands of images from the collections of the city's world-famous libraries, museums and universities. From football to fashions, Auchenshuggle to Yoker, you'll find it all here. Find out more
A publicly accessible, online scholarly edition of one of the most important archives of eighteenth-century medical "consultation letters", containing more than 20,000 digitised pages. Find out more

I took Friday off again this week as I needed to go and collect a new pair of glasses from my opticians in the West End, which is quite a trek from my house.  Although I’d taken the day off I ended up working for about three hours as on Thursday Fraser Dallachy emailed me to ask about the location of the semantically tagged EEBO dataset that we’d worked on a couple of years ago.  I didn’t have this at home but I was fairly certain I had it on a computer in my office so I decided to take the opportunity to pop in and locate the data.  I managed to find a 10Gb tar.gz file containing the data on my desktop PC, along with the unzipped contents (more than 25,000 files) in another folder.  I’d taken an empty external hard drive with me and began the process of copying the data, which took hours.  I’d also remembered that I’d developed a website where the tagged data could be searched and that this was on the old Historical Thesaurus server, but unfortunately it no longer seemed to be accessible.  I also couldn’t seem to find the code or data for it on my desktop PC, but I remembered the previously I’d set up one of the four old desktop PCs I have sitting in my office as a server and the system was running on this.  It took me a while to get the old PC connected and working, but I managed to get it to boot up.  It didn’t have a GUI installed so everything needed to be done at the command line, but I located the code and the database.  I had planned to copy this to a USB stick, but the server wasn’t recognising USB drives (in either NTFS or FAT format) so I couldn’t actually get the data off the machine.  I decided therefore to install Ubuntu Linux on a bootable USB stick and to get the old machine to boot into this rather than run the operating system on the hard drive.  Thankfully this worked and I could then access the PC’s hard drive from the GUI that ran from the USB stick.  I was able to locate the code and the data and copy them onto the external hard drive, which I then left somewhere that Fraser would be able to access it.  Not a bad bit of work for a supposed holiday.

As with previous week’s I split my time mostly between the Anglo-Norman Dictionary and the Dictionary of the Scots Language.  For the AND I finally updated the user interface.  I added in the AND logo and updated the colour schemes to reflect the colours used in the logo.  I’m afraid the colours used in the logo seem to be straight out of a late 1990s website so unfortunately the new interface has that sort of feel about it too.  The header area now has a white background as the logo needs a white background to work.  The ‘quick search’ option is now better positioned and there is a new bar for the navigation buttons.  The active navigation button and other site buttons are now the ‘A’ red, panels are generally the ‘N’ blue and the footer is the ‘D’ green.  The main body is now slightly grey so that the entry area stands out from it.  I replaced the header font (Cinzel) with a Cormorant Garamond as this more closely resembles the font used in the logo.

The left-hand panel has been reworked so that entries are smaller and their dates and right-aligned.  I also added stripes to make it easier to keep your eye on an entry and its date.  The fixed header that appears when you scroll down a longer entry now features the AND logo/  The ‘Top’ button that appears when you scroll down a long entry now appears to the right so it doesn’t interfere with the left-hand panel.  The footer now only features the logos for Aberystwyth and AHRC and these appear on the right, with links to some pages on the left.

I have also updated the appearance of the ‘Try and Advanced Search’ button so it only appears on the ‘quick search’ results page (which is what should have happened originally).  I also removed the semantic tags that were added from the XML but need to be edited out of the XML.  I have also ticked a few more things off my ‘to do’ list, including replacing underscores with spaces in parts of speech and language tags and replacing ‘v.a.’ and ‘v.n’ as requested.  I also updated the autocomplete styles (when you type into the quick search box) so they fit in with the site a bit better.

I then began looking into reordering the citations in the entries so they appear in date order within their senses, but I remembered that Geert wanted some dates to be batch processed and realised that this should be attempted first.  I had a conversation with Geert about this, but the information he sent wasn’t well structured enough to be used and it looks like the batch updating of dates will need to wait until after the launch.  Instead I moved on to updating the source text pop-ups in the entry.  These feature links to the DEAF website and a link to search the AND entries for all others that feature the source.

This was pretty straightforward but the ‘AND Citations’ link was not.  On the old site clicking on this link ran a search that displayed the citations.  We had nothing comparable to this developed for the new site.  So I needed to update the citation search to allow the user to search based on the sigla (source text).  This in turn meant updating my citations table to add a field for holding the citation siglum and regenerating the citations and citation search words and then updating the API to allow a citation search to be limited by a siglum ID.  I then updated the ‘Citations’ tab of the ‘Advanced Search’ page to add a new box for ‘citation siglum’.  This is an autocomplete box – you type some text and a list of matching sigla are displayed, from which you can select one.  This in turn meant updating the API to allow the sigla to be queried for this autocomplete.  But for example type in ‘a-n’ into the box and a list of all sigla containing this are displayed.  Select ‘A-N Falconry’ and you can then find all entries where this siglum appears.  You can also combine this with citation text and date (although the latter won’t be much use).

I’ve also tweaked the search results tab on the entry page so that the up and down buttons don’t appear if you’re at the top or bottom of the results, and I’ve ensured if you’re looking at an entry towards the end of the results a sufficient number of results before the one you’re looking at appear.  I’ve also ensured that the entry lemma and hom appear in the <title> of the web page (in the browser tab) so you can easily tell which tab contains which entry.  Here’s a screenshot of the new interface: 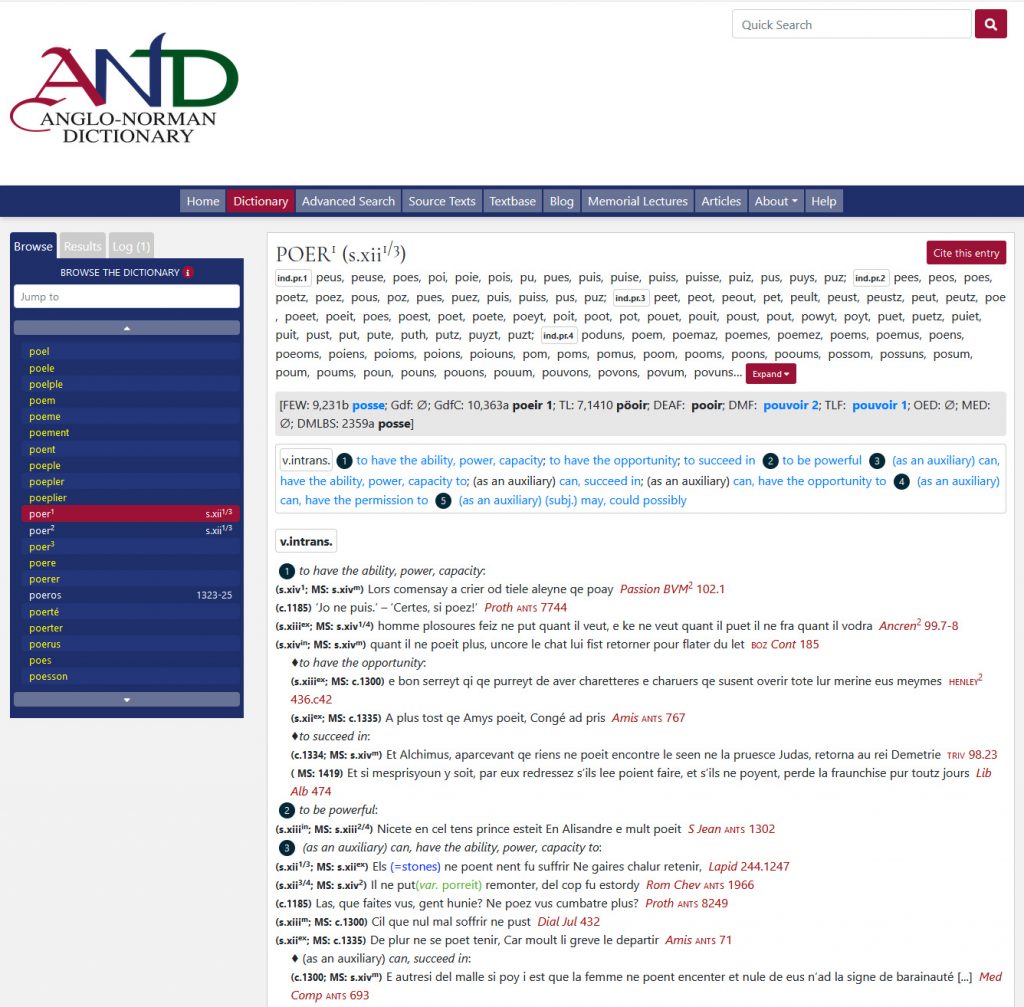 For the DSL I spent some time answering emails about a variety of issues.  I also completed my work on the issue of accents in the search, updating the search forms so that any accented characters that a user adds in are converted to their non-accented version before the search runs, ensuring someone searching for ‘Privacé’ will find all ‘privace’ in the full text.  I also tweaked the wording of the search results to remove the ‘supplementary’ text from it as all supplementary items have now either been amalgamated or turned into main entries.  I also put in redirects from all of the URLs for the deleted child entries to their corresponding main entries.  This was rather time consuming to do as I needed to go through each deleted child entry, get each of its URLs, then get the main URL of the corresponding main entry, add these to a new database table and then add a new endpoint to the V4 API that accepts a child URL, then checks the database for any main URL and returns this.  Then I needed to update the entry page so that the URL is passed to this new redirect checking API endpoint and if it matches a deleted item the page needs to redirect to the proper URL.

Also this week I had a conversation with Wendy Anderson about updates to the Mapping Metaphor website.  I had thought these would just be some simple tweaks to the text of existing pages, but instead the site structure needs to be updated, which might prove to be tricky.  I’m hoping to be able to find the time to do this next week.

Finally, I continued to work on the Burns Supper map, adding in the remaining filters.  I also fixed a few dates, added in the introductory text and a ‘favicon’.  I still need to work on the layout a bit, which I’ll hopefully do next week, but the bulk of the work for the map is now complete.