The resource provides ultrasound tongue imaging (UTI) and lip video of speech, magnetic resonance imaging (MRI) video of speech, and 2D midsagittal head animations based on MRI and UTI data. Find out more
The Digital Catalogue documents, visually and textually, the first ten years of Andy Goldsworthy's ephemeral, outdoor practice. It replicates Goldsworthy's Slide Cabinet Index, and includes previously unpublished material from Goldsworthy's Sketchbook Diaries. Find out more
As told by some of Scotland's best writers, and illustrated with thousands of images from the collections of the city's world-famous libraries, museums and universities. From football to fashions, Auchenshuggle to Yoker, you'll find it all here. Find out more
The Scottish Corpora project has created large electronic corpora of written and spoken texts for the languages of Scotland, featuring nearly 4.6 million words of text, with audio recordings to accompany many of the spoken texts. Find out more
The Metaphor Map of English shows the metaphorical links which have been identified between different areas of meaning. These links can be from the Anglo-Saxon period right up to the present day so the map covers 1300 years of the English language. Find out more
The project provides a richly-illustrated Catalogue of all known architectural projects by Charles Rennie Mackintosh, including over 1200 drawings by Mackintosh and the practice, analytical and contextual essays, a timeline and glossary. Find out more
The project explores Romantic-period accounts of journeys into Wales and Scotland with a focus on the writings of the Flintshire naturalist and antiquarian Thomas Pennant (1726-1798), whose published Tours of both countries did so much to awaken public interest in the ‘peripheries’ of Britain. Find out more
The online catalogue includes some 550 oil paintings and over 1700 works on paper dating from ca 1850 to 1903. The evolution of each painting from sketch to final oil is described and illustrated. Find out more
Bess of Hardwick's Letters brings together, for the first time, the remarkable letters written to and from Bess of Hardwick (c.1521/2 or 1527-1608), one of Elizabethan England's most famous figures. Find out more
James McNeill Whistler (1834-1903) was a major figure in 19th century printmaking and created 490 etchings. Over 9500 impressions of these prints have been located and investigated during the project, which completes a series of catalogues raisonnés of Whistler's oeuvre. Find out more

It was another strike week, and this time I only worked on Thursday and Friday.  I spent a lot of Thursday catching up with emails and thinking about the technical implications of potential projects that people had contacted me about.  I responded to a PhD student who had asked me for advice about a Wellcome Trust application and I spent quite a bit of time going through the existing Anglo-Norman Dictionary website to get a better understanding of how it works, the features it offers and how it could be improved.  I’d also been contacted by two members of Critical Studies staff who wanted some technical work doing.  The first was Paul Malgrati, who is wanting to put together an interactive map of Burns Suppers across the world.  He’d sent me a spreadsheet containing the data he’s so far compiled and I spent some time going through this and replying to his email with some suggestions.  The second was Sourit Bhattacharya, who is submitting a Carnegie application to develop an online bibliography.  I considered his requirements and replied to him with some ideas.

I spent most of Friday working on the interactive map that plots important locations in a novel for Gerry McKeever’s Regional Romanticism project.  I created an initial version of this back in January and since then Gerry has been working on his data, extending it to cover all three volumes of the novel and locations across the globe.  He’d also made some changes to the structure of the data (e.g. page numbers had been separated out from the extracts to a new column in the spreadsheet) and had greatly enhanced the annotations made for each item.  He had also written some new introductory text.  The new data consisted of 120 entries across 88 distinct locations, and I needed to convert this from an Excel spreadsheet into a JSON file, with locations separated out and linked to multiple entries to enable map markers to be associated with multiple items.  It took several hours to do this.  I did consider writing a script to handle to conversion but that would have taken some time in itself and this is the last time the entire dataset will be migrated so the script would never be needed again.  Plus undertaking the task manually gave me the opportunity to check the data and to ensure that the same locations mentioned in different entries all matched up.

I also created a new version of the interactive map that used the new data and incorporated some other updates too.  This version has the new intro slide and hopefully has all of the updates to the existing data plus all of the new data for all three volumes.  I changed the display slightly to include page numbers as a separate field (the information now appears in the ‘volume’ section) and also to include the notes.  To differentiate these from the extracts I’ve enclosed the extracts in large speech marks.

One issue I encountered is that with all of the new data in place the loading of new items and panning to them slowed to a crawl.  The map unfortunately became absolutely unusable.  After some investigation I realised that the plugin that makes the nice curved lines between locations was to blame.  It appears to not be at all scalable and I had to disable the grey dotted lines on the map as with all of the markers visible the map was unusable.  I may be able to fix this, or I may have to switch to an alternative plugin for the lines  as the one that’s currently used appears to be horribly inefficient and unscalable.  However, the yellow line connecting the current marker with the previous one is still visible as you scroll around the locations and I think this is the most important thing.  Below is a screenshot of the map as it currently stands.  Next week I will be continuing with the UCU strike action and will therefore only be working on the Friday. 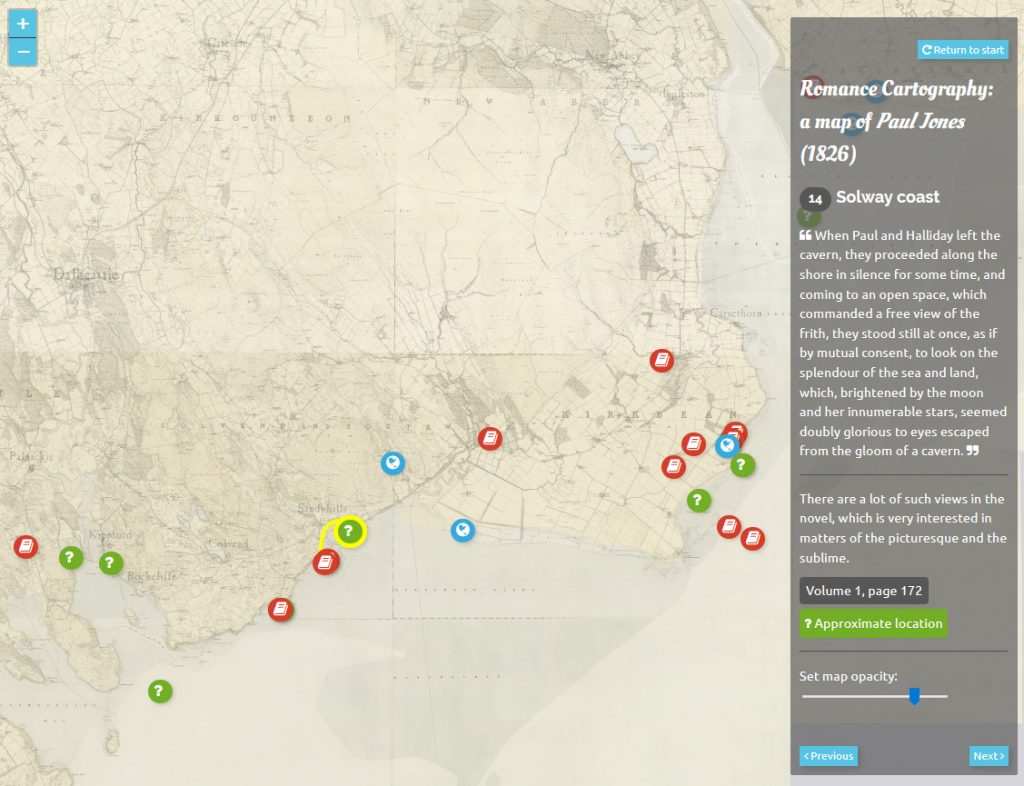