The project provides a richly-illustrated Catalogue of all known architectural projects by Charles Rennie Mackintosh, including over 1200 drawings by Mackintosh and the practice, analytical and contextual essays, a timeline and glossary. Find out more
The Scottish Corpora project has created large electronic corpora of written and spoken texts for the languages of Scotland, featuring nearly 4.6 million words of text, with audio recordings to accompany many of the spoken texts. Find out more
A database of all known people of Scotland between 1093 and 1314 mentioned in over 8600 contemporary documents. It is also being extended to 1371 to include all those lands, peoples and relationships mentioned in royal charters between 1314 and 1371. Find out more
The University of Glasgow’s Historical Thesaurus of English is a unique resource charting the development of meaning in the huge and varied vocabulary of English. It consists of almost every recorded word in English from Anglo-Saxon times to the present day, all arranged into detailed hierarchies of meaning. Find out more
As told by some of Scotland's best writers, and illustrated with thousands of images from the collections of the city's world-famous libraries, museums and universities. From football to fashions, Auchenshuggle to Yoker, you'll find it all here. Find out more
The project explores Romantic-period accounts of journeys into Wales and Scotland with a focus on the writings of the Flintshire naturalist and antiquarian Thomas Pennant (1726-1798), whose published Tours of both countries did so much to awaken public interest in the ‘peripheries’ of Britain. Find out more
The resource includes historical research for all Berwickshire place-names on the Ordnance Survey 1:50,000 Landranger map, including more than 1,600 place-names and 7,000 historical forms presented via a series of interactive maps. Find out more
James McNeill Whistler (1834-1903) was a major figure in 19th century printmaking and created 490 etchings. Over 9500 impressions of these prints have been located and investigated during the project, which completes a series of catalogues raisonnés of Whistler's oeuvre. Find out more
A publicly accessible, online scholarly edition of one of the most important archives of eighteenth-century medical "consultation letters", containing more than 20,000 digitised pages. Find out more
The online catalogue includes some 550 oil paintings and over 1700 works on paper dating from ca 1850 to 1903. The evolution of each painting from sketch to final oil is described and illustrated. Find out more

After the disruption of the recent strike, this was my first full week back at work, and it was mostly spent making final updates to the SCOSYA website ahead of next Tuesday’s official launch.  We decided to make the full resource publicly available on Friday as a soft launch so if you would like to try the public and linguist’ atlases, look at the interactive stories, view data in tables or even connect to the API you can now do it all at https://scotssyntaxatlas.ac.uk/.  I’m really pleased with how it’s all looking and functioning and my only real worry is that we get lots of users and a big bill from MapBox for supplying the base tiles for the map.  We’ll see what happens about that next week.  But for now I’ll go into a bit more detail about the tasks I completed this week.

We had a team meeting on Tuesday morning where we finalised the menu structure for the site, the arrangement of the pages, the wording of various sections and such matters.  Frankie MacLeod, the project RA, had produced some walkthrough videos for the atlas that are very nicely done and we looked at those and discussed some minor tweaks and how they might be integrated with the site.  We did wonder about embedding a video in the homepage, but decided against it as E reckons ‘pivot to video’ is something people thought users did but has proved to be false.  I personally never bother with videos so I kind of agree with this, but I know from previous experience with other projects such as Mapping Metaphor that other users do really appreciate videos, so I’m sure they will be very useful.

We still had the online consent form for accessing the data to finalise so we discussed the elements that would need to be included and how it would operate.  Later in the week I implemented the form, which will allow researchers to request all of the audio files, or ones for specific areas.  We also decided to remove the apostrophe from “Linguists’ Atlas” and to just call it “Linguist Atlas” throughout the site as the dangling apostrophe looks a bit messy.  Hopefully our linguist users won’t object too much!  I also added in a little feature to allow images of places to appear in the pop-ups for the ‘How do people speak in…’ map.  These can now be managed via the project’s Content Management System and I think having the photos in the map really helps to make it feel more alive.

During the week I arranged with Raymond Brasas of Arts IT Support to migrate the site to a new server in preparation for the launch, as the current server hosts many different sites, is low on storage and is occasionally a bit flaky.  The migration went smoothly and after some testing we updated the DNS records and the version of the site on the new server went live on Thursday.  On Friday I went live with all of the updates, which is when I made changes to the menu structure and did things such as update all internal URLs in the site so that any links to the ‘beta’ version of the atlases now point to the final versions.  This includes things such as the ‘cite this page’ links.  I also updated the API to remove the warning asking people to not use it until the launch as we’re now ready to go.  There are still a few tweaks to make next week, but pretty much all my work on the project is now complete.

In addition to SCOSYA I worked for a few other projects this week, and also attended the English Language & Linguistics Christmas lunch on Tuesday afternoon.  I had a chat to Thomas Clancy about the outstanding tasks I still need to do for the Place-names of Kirkcudbrightshire project.  I’m hoping to find the time to get all these done next week.  I made a few updates to Stuart Gillespie’s Newly Recovered English Classical Translations annexe (https://nrect.gla.ac.uk/) site, namely adding in a translation of Sappho’s Ode and fixing some issues with security certificates.  I also arranged for Carole Hough’s CogTop site to have its domain renewed for a year, as it was due to expire this month and had a chat with Alasdair Whyte from Celtic and Gaelic about his new place-names of Mull project.  I’m going to be adapting the system I created for the Berwickshire Place-names project for Alasdair, which will include adding in multilingual support and other changes.  I’m meeting with him next week to discuss the details.  I also managed to dig out the Scots School Dictionary Google Developer account details for Ann Ferguson at DSL, as she didn’t have a record of these and needed to look at the stats.

Other than the above, I continued to work on a new version of the Digital Humanities Network site.  I completed work on the new Content Management System, created a few new records (well, mostly overhauling some of the old data), and started work on the front-end.  This included creating the page where project details will be viewed and starting work on the browse facilities that will let people access the projects.  There’s still some work to be done but I’m pretty happy with how the new site is coming on.  It’s certainly a massive improvement on the old, outdated resource.  Below is a screenshot of one of the new pages: 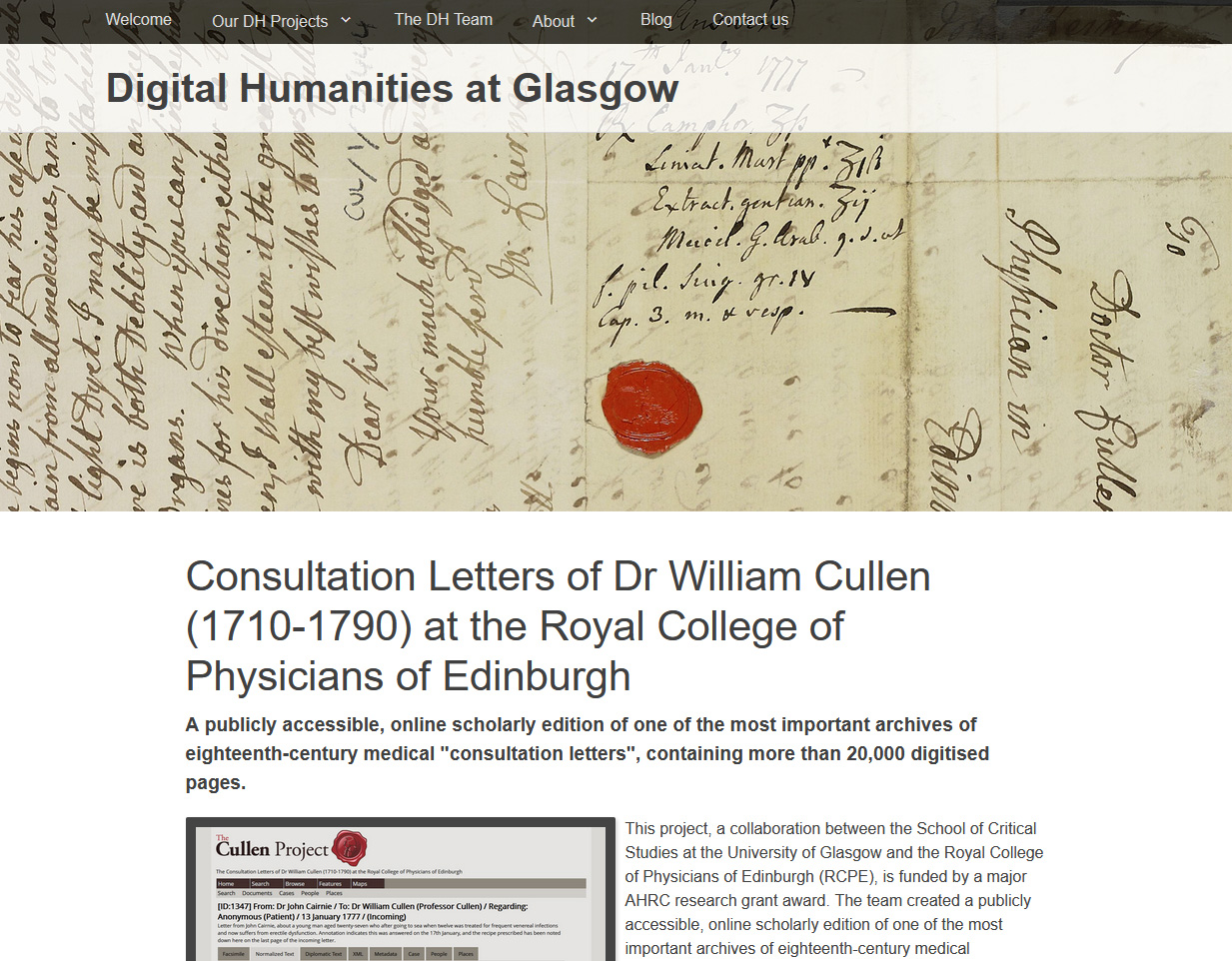 Next week we will officially launch the SCOSYA resource and I will hopefully have enough time to tie up a few loose ends before finishing for the Christmas holidays.