Bess of Hardwick's Letters brings together, for the first time, the remarkable letters written to and from Bess of Hardwick (c.1521/2 or 1527-1608), one of Elizabethan England's most famous figures. Find out more
The Scottish Corpora project has created large electronic corpora of written and spoken texts for the languages of Scotland, featuring nearly 4.6 million words of text, with audio recordings to accompany many of the spoken texts. Find out more
The University of Glasgow’s Historical Thesaurus of English is a unique resource charting the development of meaning in the huge and varied vocabulary of English. It consists of almost every recorded word in English from Anglo-Saxon times to the present day, all arranged into detailed hierarchies of meaning. Find out more
A database of all known people of Scotland between 1093 and 1314 mentioned in over 8600 contemporary documents. It is also being extended to 1371 to include all those lands, peoples and relationships mentioned in royal charters between 1314 and 1371. Find out more
The Scots Syntax Atlas presents the results of over 100,000+ acceptability judgments from over 500 speakers on over 250 morphosyntactic phenomena. The Atlas also contains a text-to-sound aligned corpus of spoken data totalling 275 hours and over 3 million words. Find out more
The online catalogue includes some 550 oil paintings and over 1700 works on paper dating from ca 1850 to 1903. The evolution of each painting from sketch to final oil is described and illustrated. Find out more
The Metaphor Map of English shows the metaphorical links which have been identified between different areas of meaning. These links can be from the Anglo-Saxon period right up to the present day so the map covers 1300 years of the English language. Find out more
A publicly accessible, online scholarly edition of one of the most important archives of eighteenth-century medical "consultation letters", containing more than 20,000 digitised pages. Find out more
As told by some of Scotland's best writers, and illustrated with thousands of images from the collections of the city's world-famous libraries, museums and universities. From football to fashions, Auchenshuggle to Yoker, you'll find it all here. Find out more
The resource includes historical research for all Berwickshire place-names on the Ordnance Survey 1:50,000 Landranger map, including more than 1,600 place-names and 7,000 historical forms presented via a series of interactive maps. Find out more

I split most of my time this week between the SCOSYA project and the Historical Thesaurus.  The launch of the SCOSYA atlases is scheduled to take place in November and I had suggested to Jennifer that it might be good to provide access to the project’s data via tables rather than through the atlas interfaces.  This is because although the atlases look great and are a nice interactive way of accessing and visualising the data, some people prefer looking at tables of data instead, and other people may struggle to use the interactive atlases due to accessibility issues, but may still want to be able to view the project’s data.  We will of course provide free access to the project’s API, through which all of the data can be accessed as CSV or JSON files, or can even be incorporated into a completely new interface, but I thought it might be useful if we provided text-based access to the data through the project’s front-end as well.  Jennifer agreed that this would be useful, so I spent some time writing a specification document for the new features, sending it to the team for feedback and developing the new features. 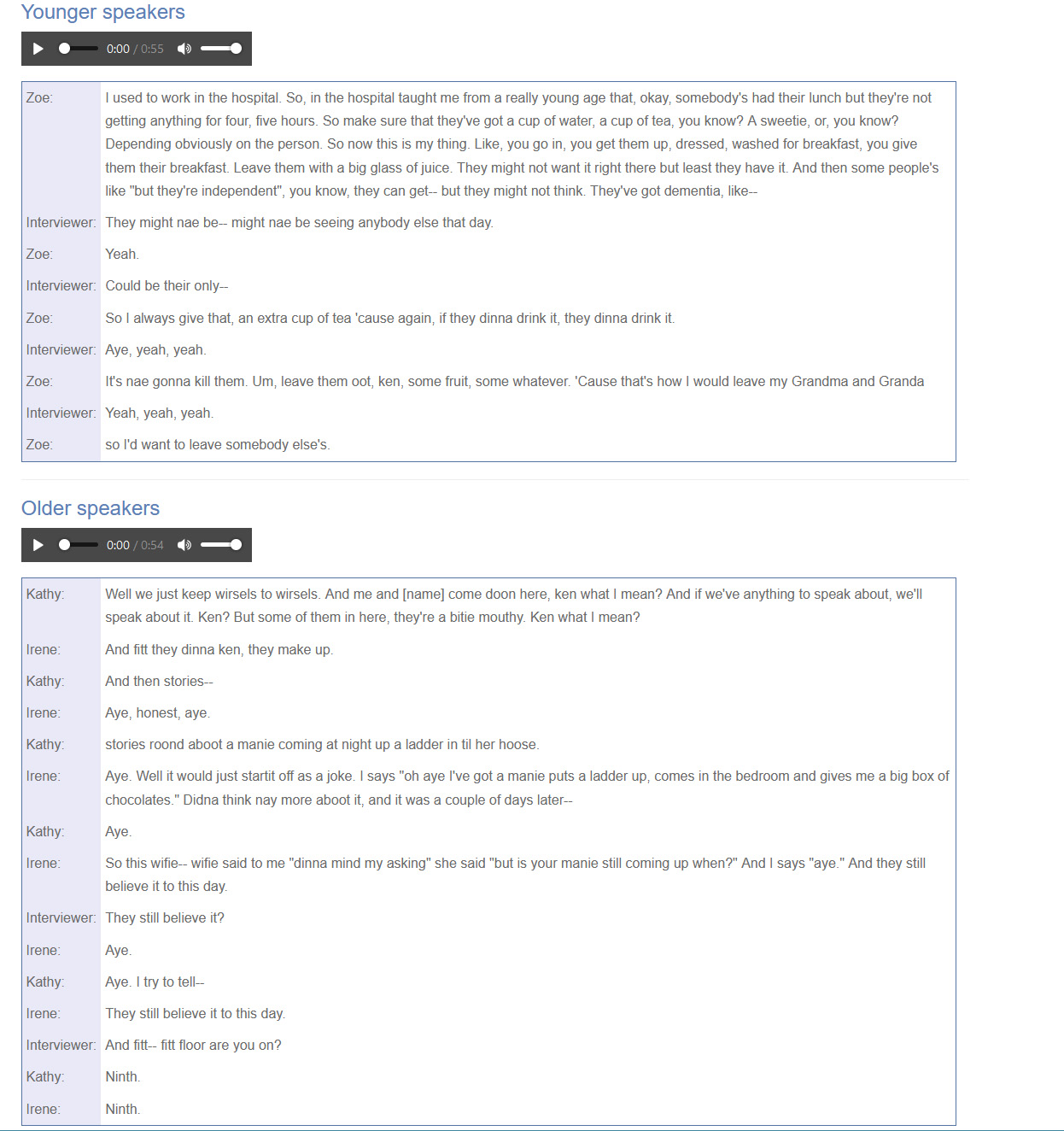 The third new feature lists all of the examples that can be browsed for through the public atlas.  You can then click on one of these examples to listen to the example sound clips of the example and to view a table of results for all of the questionnaire locations.  Users can also click through to view this example on the atlas itself too, as I figured that some people might want to view the results as a table but then see how these look on the atlas too.  The following screenshot shows the ‘explore’ feature for a particular example: 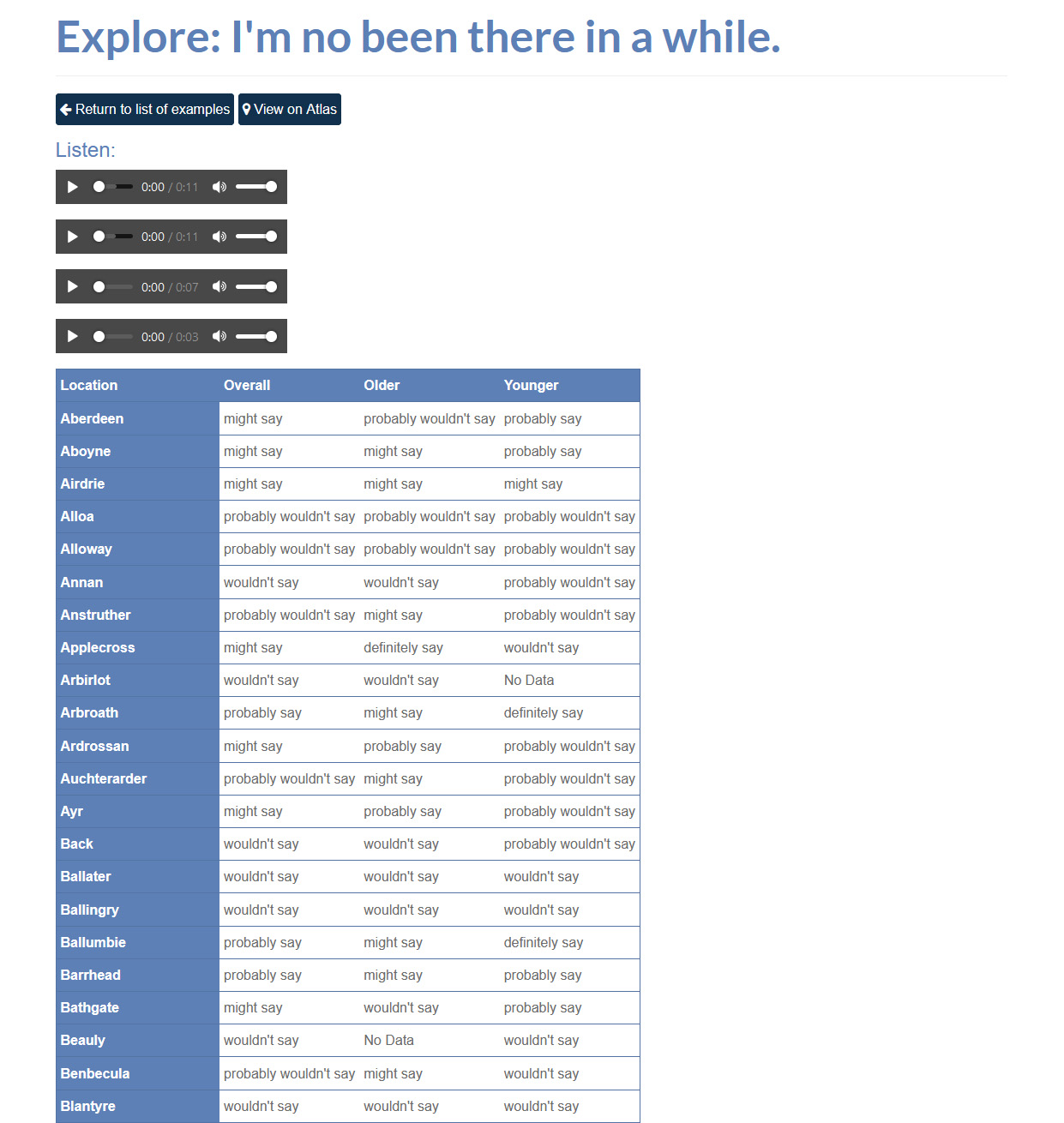 The fourth new feature replicates the full list of examples as found in the linguists’ atlas.  There are many examples nested within parent and sub-parent categories and it can be a bit difficult to get a clear picture of what is available through the nested menus in the atlas, so this new feature provides access to a complete list of the examples that is fully expanded and more easy to view, as the following screenshot demonstrates: 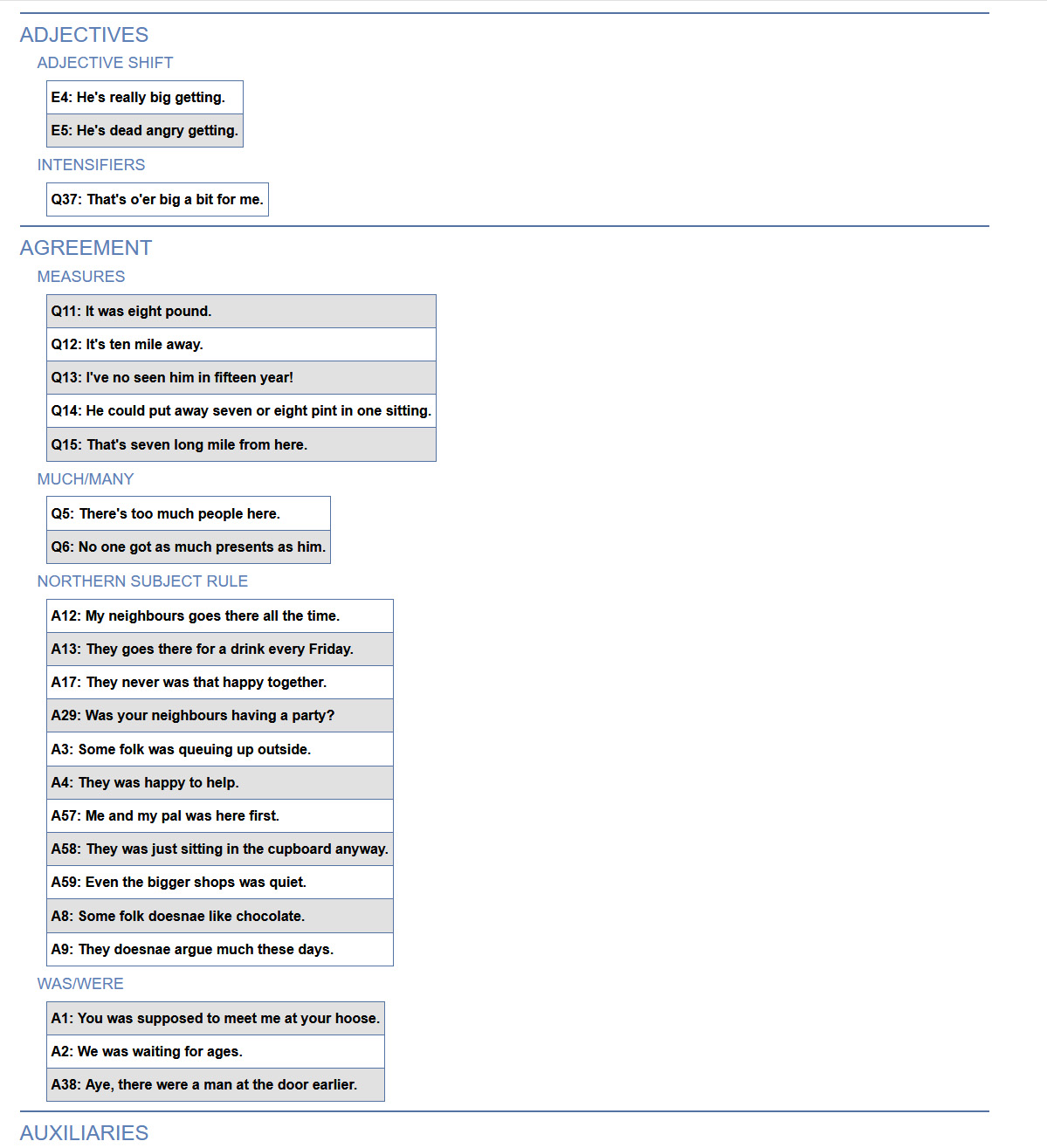 It’s then possible to click on an example to view the results of this example for every location in a table, again with a link through to the result on the atlas, which then enables the user to customise the display of results further, for example focussing on older or younger speakers or limiting the display to particular rating levels.

I reckon these new features are going to complement the atlases very well and will hopefully prove very useful to researchers.  Also this week I received some feedback on the atlases from the project team and I spent some time going through this, adding in some features that had been requested (e.g. adding in buttons to scroll the user’s page down so that the full atlas is on screen) and investigating some bugs and other issues that had been reported, including some issues with the full-screen view of the atlas when using Safari in MacOS that Gary reported that I have so far been unable to replicate.  I also implemented a new way of handling links to other parts of the atlas from the stories, as new project RA Frankie had alerted me to an issue with the old way.  Handling internal links is rather tricky as we’re not really loading a new page, it’s just the JavaScript in the user’s browser processing and displaying some different data.  As a new page is never requested pressing the ‘back’ button doesn’t load what you might expect to be the previous page, but instead displays the last full web page that was loaded.  The pages also don’t open properly in a new tab because the reference in the link is not to an actual page, but is instead intended to be picked up by JavaScript in the page when the link is clicked on and then processed to change the map contents.  When you open the link in a new tab the JavaScript doesn’t get to run and the browser tries to load the reference in the link, which ends up as a broken link.

It’s not a great situation and the alternative should work a bit better.  Rather than handling the link in JavaScript the links are now full page requests that get sent to the server.  A script on the server then picks up the link and processes a full page reload of the relevant section of the atlas.  Unfortunately if the user is on the last slide of a story, then clicks a link on the last slide then presses the back button they’ll end up back at the first slide in the story not the last, as there isn’t a way to reference a specific slide in a story, but setting the links to open in a new tab by default gets round this problem.

Finally for the project this week I met with Jennifer and E to discuss the ancillary pages and text that need to be put in place before the launch, and we discussed the launch itself and what this would involve.

For the HT I generated some datasets that an external researcher had requested from the Thesaurus of Old English data, and I generated some further datasets from the main HT database for another request.  I also started to implement a system to generate the new dates table.  I created the necessary table and wrote a function that takes a lexeme and goes through all of the 19 date fields to generate the rows that would need to be created for the lexeme.  As of yet I haven’t set this running on the whole dataset, but instead I’ve created a test script that allows you to pass a catid and view all of the date rows that would be created for each lexeme in the category so I (and Marc and Fraser) can test things out.  I’ve tested it out with categories that have some complicated date structures and so far I’ve not encountered any unexpected behaviour, apart from one thing:  Some lexemes have a full date such as ‘1623 Dict. + 1642–1711’.  The script doesn’t analyse the ‘fulldate’ field but instead looks at each of the actual date fields.  There is only one ‘label’ field so it’s not possible to ascertain that in this case the label is associated with the first date.  Instead the script always associates the label with the last date that a lexeme has.  I’m not sure how common it is for a label to appear in the middle of a full date, but it definitely crops up fairly regularly when I load a random category on the HT homepage, always as ‘Dict.’ so far.  We’ll need to see what we can do about this, if it turns out to be important, which I guess it probably will.

Also this week I performed some App Manager duties, had a conversation with Dauvit Broun, Nigel Leask and the RDM team about the ArtsLab session on data management plans next week, and spoke to Ann Ferguson of the DSL about how changes to the XML structure of entries will be  reflected in the front-end of the DSL.