The University of Glasgow’s Historical Thesaurus of English is a unique resource charting the development of meaning in the huge and varied vocabulary of English. It consists of almost every recorded word in English from Anglo-Saxon times to the present day, all arranged into detailed hierarchies of meaning. Find out more
The Scots Syntax Atlas presents the results of over 100,000+ acceptability judgments from over 500 speakers on over 250 morphosyntactic phenomena. The Atlas also contains a text-to-sound aligned corpus of spoken data totalling 275 hours and over 3 million words. Find out more
Bess of Hardwick's Letters brings together, for the first time, the remarkable letters written to and from Bess of Hardwick (c.1521/2 or 1527-1608), one of Elizabethan England's most famous figures. Find out more
The Metaphor Map of English shows the metaphorical links which have been identified between different areas of meaning. These links can be from the Anglo-Saxon period right up to the present day so the map covers 1300 years of the English language. Find out more
As told by some of Scotland's best writers, and illustrated with thousands of images from the collections of the city's world-famous libraries, museums and universities. From football to fashions, Auchenshuggle to Yoker, you'll find it all here. Find out more
The project explores Romantic-period accounts of journeys into Wales and Scotland with a focus on the writings of the Flintshire naturalist and antiquarian Thomas Pennant (1726-1798), whose published Tours of both countries did so much to awaken public interest in the ‘peripheries’ of Britain. Find out more
The resource includes historical research for all Berwickshire place-names on the Ordnance Survey 1:50,000 Landranger map, including more than 1,600 place-names and 7,000 historical forms presented via a series of interactive maps. Find out more
The Digital Catalogue documents, visually and textually, the first ten years of Andy Goldsworthy's ephemeral, outdoor practice. It replicates Goldsworthy's Slide Cabinet Index, and includes previously unpublished material from Goldsworthy's Sketchbook Diaries. Find out more
James McNeill Whistler (1834-1903) was a major figure in 19th century printmaking and created 490 etchings. Over 9500 impressions of these prints have been located and investigated during the project, which completes a series of catalogues raisonnés of Whistler's oeuvre. Find out more
The project provides a richly-illustrated Catalogue of all known architectural projects by Charles Rennie Mackintosh, including over 1200 drawings by Mackintosh and the practice, analytical and contextual essays, a timeline and glossary. Find out more

I focussed on the SCOSYA project for the first few days of this week.  I need to get everything ready to launch by the end of September and there is an awful lot still left to do, so this is really my priority at the moment.  I’d noticed over the weekend that the story pane wasn’t scrolling properly on my iPad when the length of the slide was longer than the height of the atlas.  In such cases the content was just getting cut off and you couldn’t scroll down to view the rest or press the navigation buttons.  This was weird as I thought I’d fixed this issue before.  I spent quite a bit of time on Monday investigating the issue, which has resulted in me having to rewrite a lot of the slide code.  After much investigation I reckoned that this was an intermittent fault caused by the code returning a negative value for the height of the story pane instead of its real height.  When the user presses the button to load a new slide the code pulls the HTML content of the slide in and immediately displays it.  After that another part of the code then checks the height of the slide to see if the new contents make the area taller than the atlas, and if so the story area is then resized.  The loading of the HTML using jQuery’s html() function should be ‘synchronous’ – i.e. the following parts of code should not execute before the loading of the HTML is completed.  But sometimes this wasn’t the case – the new slide contents weren’t being displayed before the check for the new slide height was being run, meaning the slide height check was giving a negative value (no contents minus the padding round the slide).  The slide contents then displayed but as the code thought the slide height was less than the atlas it was not resizing the slide, even when it needed to.  It is a bit of a weird situation as according to the documentation it shouldn’t ever happen.  I’ve had to put a short ‘timeout’ into the script as a work-around – after the slide loads the code waits for half a second before checking for the slide height and resizing, if necessary.  This seems to be working but it’s still annoying to have to do this.  I tested this out on my Android phone and on my desktop Windows PC with the browser set to a narrow height and all seemed to be working.  However, when I got home I tested the updated site out on my iPad and it still wasn’t working, which was infuriating as it was working perfectly on other touchscreens.

In order to fix the issue I needed to entirely change how the story pane works.  Previously the story pane was just an HTML area that I’d added to the page and then styled to position within the map, but there were clearly some conflicts with the mapping library Leaflet when using this approach.  The story pane was positioned within the map area and mouse actions that Leaflet picks up (scrolling and clicking for zoom and pan) were interfering with regular mouse actions in the HTML story area (clicking on links, scrolling HTML areas).  I realised that scrolling within the menu on the left of the map was working fine on the iPad so I investigated how this differed from the story pane on the right.  It turned out that the menu wasn’t just a plain HTML area but was instead created by a plugin for Leaflet that extends Leaflet’s ‘Control’ options (used for buttons like ‘+/-‘ and the legend).  Leaflet automatically prevents the map’s mouse actions from working within its control areas, which is why scrolling in the left-hand menu worked.  I therefore created my own Leaflet plugin for the story pane, based on the menu plugin.  Using this method to create the story area thankfully worked on my iPad, but it did unfortunately taken several hours to get things working, which was time I should ideally have been spending on the Experts interface.  It needed to be done, though, as we could hardly launch an interface that didn’t work on iPads.

I also has to spend some further time this week making some more tweaks to the story interface that the team had suggested such as changing the marker colour for the ‘Home’ maps, updating some of the explanatory text and changing the pop-up text on the ‘Home’ map to add in buttons linking through to the stories.  The team also wanted to be able to have blank maps in the stories, to make users focus on the text in the story pane rather than getting confused by all of the markers.  Having blank maps for a story slide wasn’t something the script was set up to expect, and although it was sort of working, if you navigated from a map with markers to a blank map and then back again the script would break, so I spent some time fixing this.  I also managed to find a bit of time starting on the experts interface, although less time than I had hoped.  For this I’ve needed to take elements from the atlas I’d created for staff use, but adapt it to incorporate changes that I’d introduced for the public atlas.  This has basically meant starting from scratch and introducing new features one by one.  So far I have the basic ‘Home’ map showing locations and the menu working.  There is still a lot left to do.

I spent the best part of two days this week working on the front-end for the 18th Century Borrowing pilot project for Matthew Sangster.  I wrote a little document that detailed all of the features I was intending to develop and sent this to Matt so he could check to see if what I’m doing met his expectations.  I spent the rest of the time working on the interface, and made some pretty good progress.  So far I’ve made an initial interface for the website (which is just temporary and any aspect of which can be changed as required), I’ve written scripts to generate the student forename / surname and professor title / surname columns to enable searching by surname, and I’ve created thumbnails of the images.  The latter was a bit of a nightmare as previously I’d batch rotated the images 90 degrees clockwise as the manuscripts (as far as I could tell) were written in landscape format but the digitised images were portrait, meaning everything was on its side.

However, I did this using the Windows image viewer, which gives the option of applying the rotation to all images in a folder.  What I didn’t realise is that the image viewer doesn’t update the metadata embedded in the images, and this information is used by browsers to decide which way round to display the images.  I ended up in a rather strange situation where the images looked perfect on my Windows PC, and also when opened directly within the browser, but when embedded in an HTML page they appeared on their side.  It took a while to figure out why this was happening, but once I did I regenerated the thumbnails using the command-line ImageMagick tool instead, which I set to wipe the image metadata as well as rotating the images, which seemed to work.  That is until I realised that Manuscript 6 was written in portrait not landscape so I had to repeat the process again but miss out Manuscript 6.  I have since realised that all the batch processing of images I did to generate tiles for the zooming and panning interface is also now going to be wrong for all landscape images and I’m going to have to redo all of this too.

Anyway, I also made the facility where a user can browse the pages of the manuscripts, enabling them to select a register, view the thumbnails of each page contained therein and then click through to view all of the records on the page.  This ‘view records’ page has both a text and image view.  The former displays all of the information about each record on the page in a tabular manner, including links through to the GUL catalogue and the ESTC.  The latter presents the image in a zoomable / pannable manner, but as mentioned earlier, the bloody image is on its side for any manuscript written in a landscape way and I still need to fix this, as the following screenshot demonstrates: 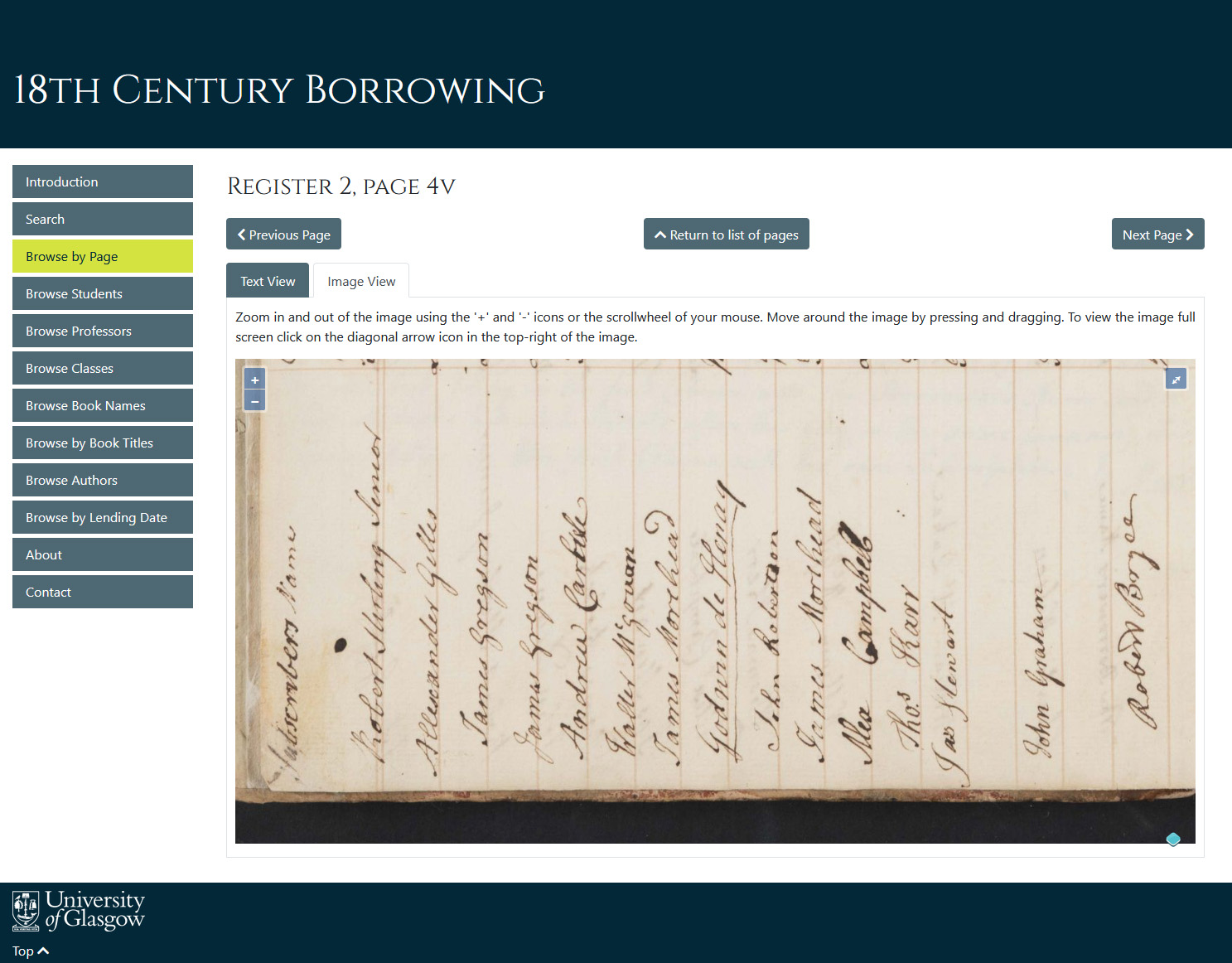 Also this week I spent a further bit of time preparing for my PDR session that I will be having next week, spoke to Wendy Anderson about updates to the SCOTS Corpus advanced search map that I need to fix, fixed an issue with the Medical Humanities Network website, made some further tweaks to the RNSN song stories and spoke to Ann Ferguson at the DSL about the bibliographical data that needs to be incorporated into the new APIs.  A another pretty busy week, all things considered.