As told by some of Scotland's best writers, and illustrated with thousands of images from the collections of the city's world-famous libraries, museums and universities. From football to fashions, Auchenshuggle to Yoker, you'll find it all here. Find out more
The Scots Syntax Atlas presents the results of over 100,000+ acceptability judgments from over 500 speakers on over 250 morphosyntactic phenomena. The Atlas also contains a text-to-sound aligned corpus of spoken data totalling 275 hours and over 3 million words. Find out more
The University of Glasgow’s Historical Thesaurus of English is a unique resource charting the development of meaning in the huge and varied vocabulary of English. It consists of almost every recorded word in English from Anglo-Saxon times to the present day, all arranged into detailed hierarchies of meaning. Find out more
A database of all known people of Scotland between 1093 and 1314 mentioned in over 8600 contemporary documents. It is also being extended to 1371 to include all those lands, peoples and relationships mentioned in royal charters between 1314 and 1371. Find out more
A publicly accessible, online scholarly edition of one of the most important archives of eighteenth-century medical "consultation letters", containing more than 20,000 digitised pages. Find out more
James McNeill Whistler (1834-1903) was a major figure in 19th century printmaking and created 490 etchings. Over 9500 impressions of these prints have been located and investigated during the project, which completes a series of catalogues raisonnés of Whistler's oeuvre. Find out more
The online catalogue includes some 550 oil paintings and over 1700 works on paper dating from ca 1850 to 1903. The evolution of each painting from sketch to final oil is described and illustrated. Find out more
The resource provides ultrasound tongue imaging (UTI) and lip video of speech, magnetic resonance imaging (MRI) video of speech, and 2D midsagittal head animations based on MRI and UTI data. Find out more
Bess of Hardwick's Letters brings together, for the first time, the remarkable letters written to and from Bess of Hardwick (c.1521/2 or 1527-1608), one of Elizabethan England's most famous figures. Find out more
The project explores Romantic-period accounts of journeys into Wales and Scotland with a focus on the writings of the Flintshire naturalist and antiquarian Thomas Pennant (1726-1798), whose published Tours of both countries did so much to awaken public interest in the ‘peripheries’ of Britain. Find out more

It was another four-day week this week due to Monday being a bank holiday.  On Tuesday I met my fellow College of Arts developers Luca Guariento and Stevie Barrett for coffee and an informal chat about our work.  It was great to catch up with them again and find out what they’d been up to recently, and to talk about the things I’m working on, and we’re planning on having these coffees every month.  I spent much of the week on the development of the front-end for the SCOSYA project.  There are going to be several aspects to the front-end, including an ‘experts’ atlas, a more general ‘public’ atlas, the stories and a ‘listening atlas’.  I started this week on the public atlas, which will present users with a selection of features that they can view the results for, without being swamped by features or too many options.

I’ve based the new public atlas on the existing test version of the atlas, that has a panel the slides out from the left which contains the options.  I updated this panel so that it has no background colour at all, other than for the accordion content.  This hopefully makes things feel a bit less claustrophobic.  The left panel is now open by default, and I’ve updated the ‘open’ and ‘close’ icons so they sort of match each other, with a ‘<’ or a ‘>’ icon as appropriate.  The accordion sections have been updated to use colours from the site logo, with white as the background of the open accordion section.  There are currently four accordion sections: Home (the questionnaire locations), Features (the attributes that can be viewed), Stories (the stories) and How to use (help).  Only Home and Features contain content at the moment. 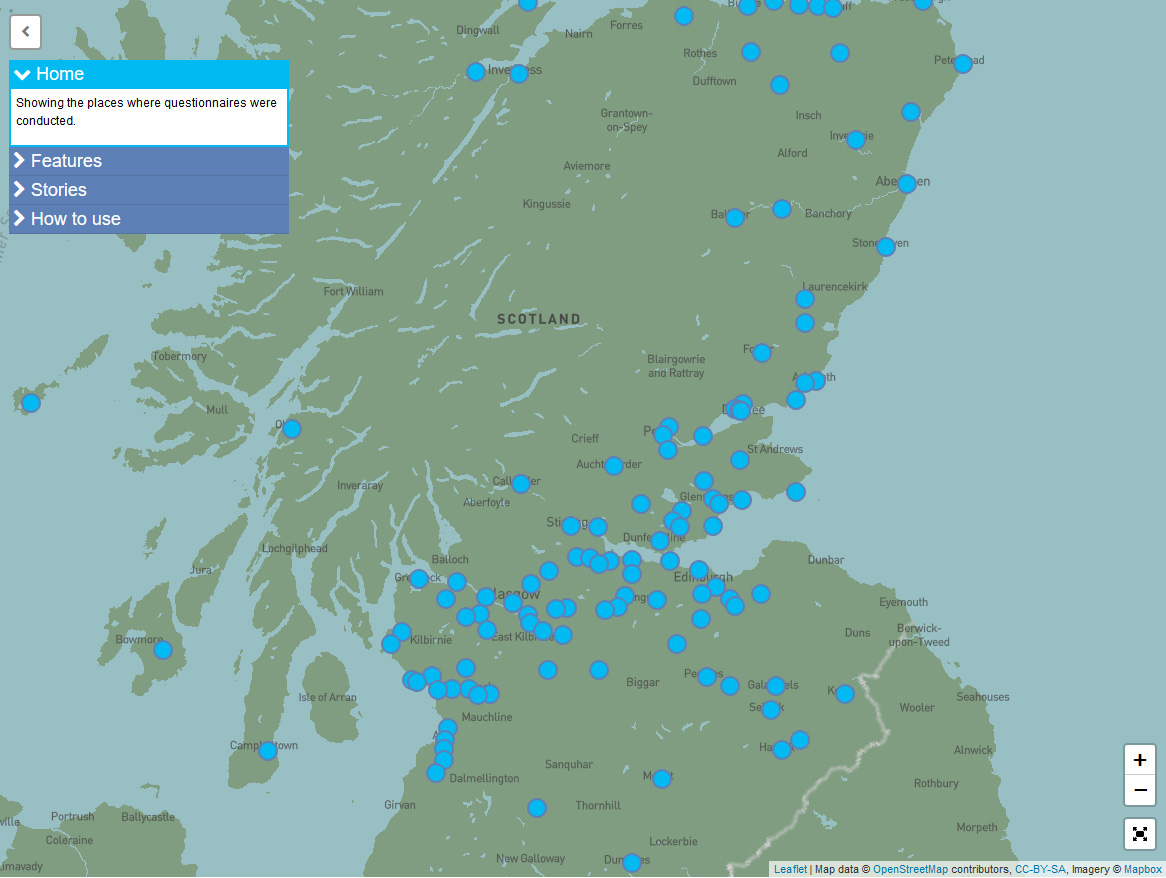 Home displays the questionnaire locations, as the above screenshot demonstrates.  As requested by Jennifer, the location markers drop onto the map and bounce, in a hopefully not too annoying way whenever the ‘Home’ accordion title is pressed on (you can keep pressing it to repeat the animation).  Location markers are the lighter blue from the logo, there is no legend and no pop-ups, but you can hover over a marker to view the location name.

The Features accordion section displays the features that you can browse through the public interface, as the following screenshot demonstrates. 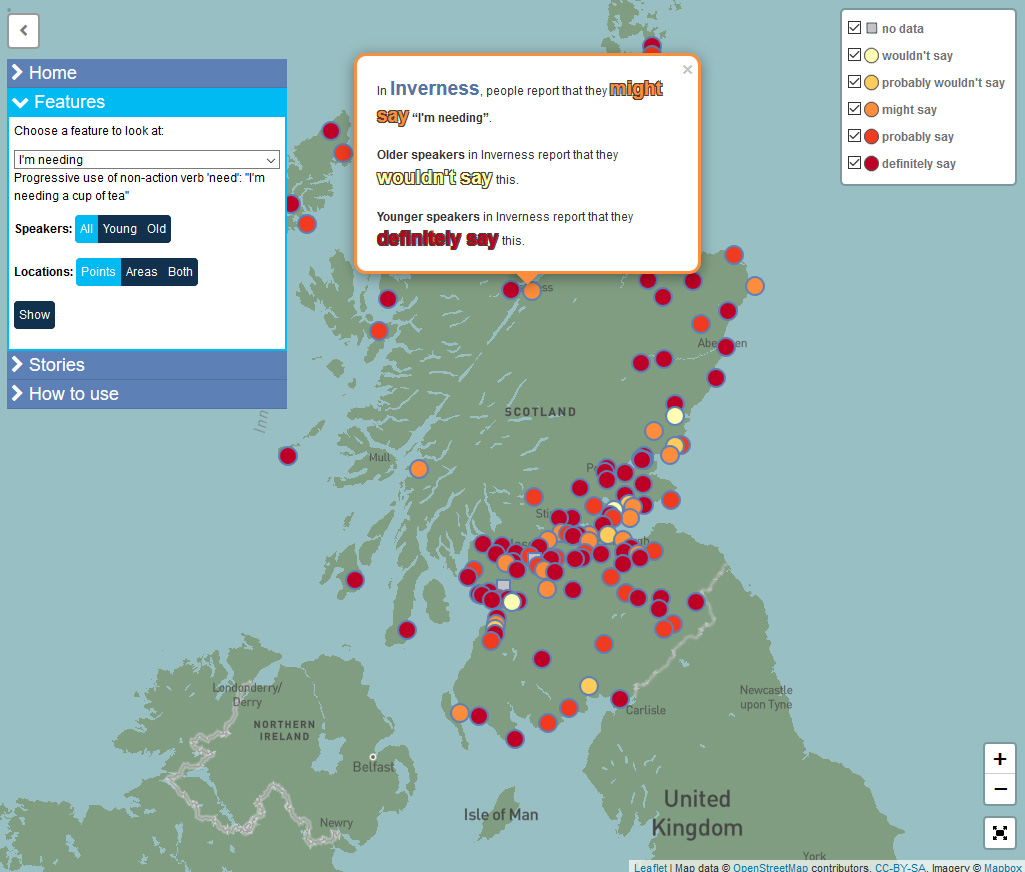 I have updated the project’s CMS to allow staff to control which codes appear in this list.  Currently I have added all those that are in the ‘1B English Language 2019’ group.  In the CMS the ‘Browse codes’ page has a new column added to the table called ‘In Public Atlas’.  Anything set to ‘Yes’ appears in the ‘Features’ section.  If you edit a code you can change a code’s ‘In Public Atlas’ value from ‘No’ to ‘Yes’ (or vice-versa).

In the Features section in the public atlas the available features are listed in a drop-down list.  I initially had them in a scrollable section, but this took up too much vertical space that we will need for other things (I have yet to add in the sample recordings or the groups option).  If you select an option its description then appears beneath the selected item.  You can also choose to limit your search to all/young/old speakers and select whether locations should appear as points/areas/both.

When you press on the ‘Show’ button the data is loaded into the map.  This can take some time to complete, as the full map areas currently get returned each time.  I might have to think of a more efficient way of doing this.  If point data is set to load the markers drop onto the map and bounce.  The legend has been updated to remove the number ratings and ‘this’ from the text.  If you turn a rating level off in the legend and then turn it on again the respective markers drop and bounce when they re-appear, which I rather like.

The pop-ups have also been updated.  I have added a coloured border to the pop-ups that corresponds to the rating level and the rating text also uses this same colour.  I’ve had to add an outline to the rating text as the very light ratings (e.g. wouldn’t say) are otherwise invisible against the white background. I’m not sure whether I like this or not, and an alternative would be to have the rating colour as a background to the text and the text in white, so it looks sort of like a button.

I still haven’t quite finished with the area display yet.  If you select to just display areas and not points then the areas work, but currently there is no legend and no pop-ups, because these are both tied into the points, as the following screenshot demonstrates. 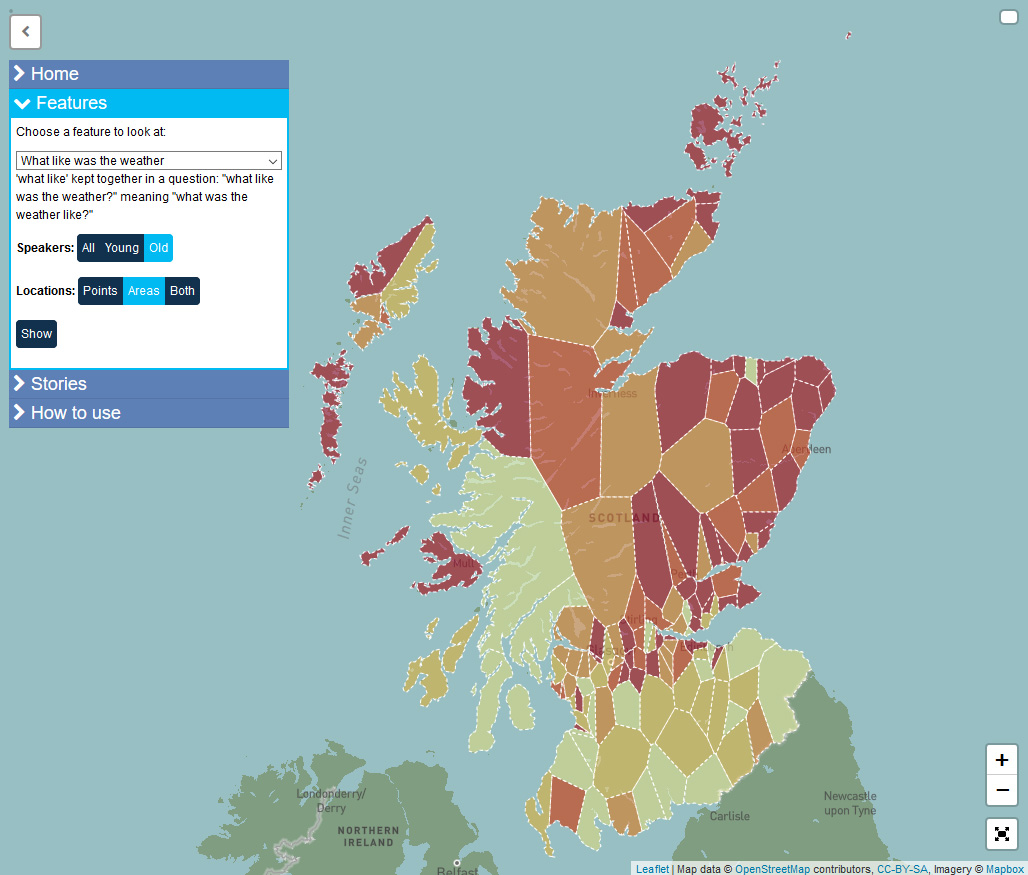 Selecting both points and areas currently looks a bit cluttered and turning a rating level off currently only removes the points and not the areas.  See the screenshot below for an example. 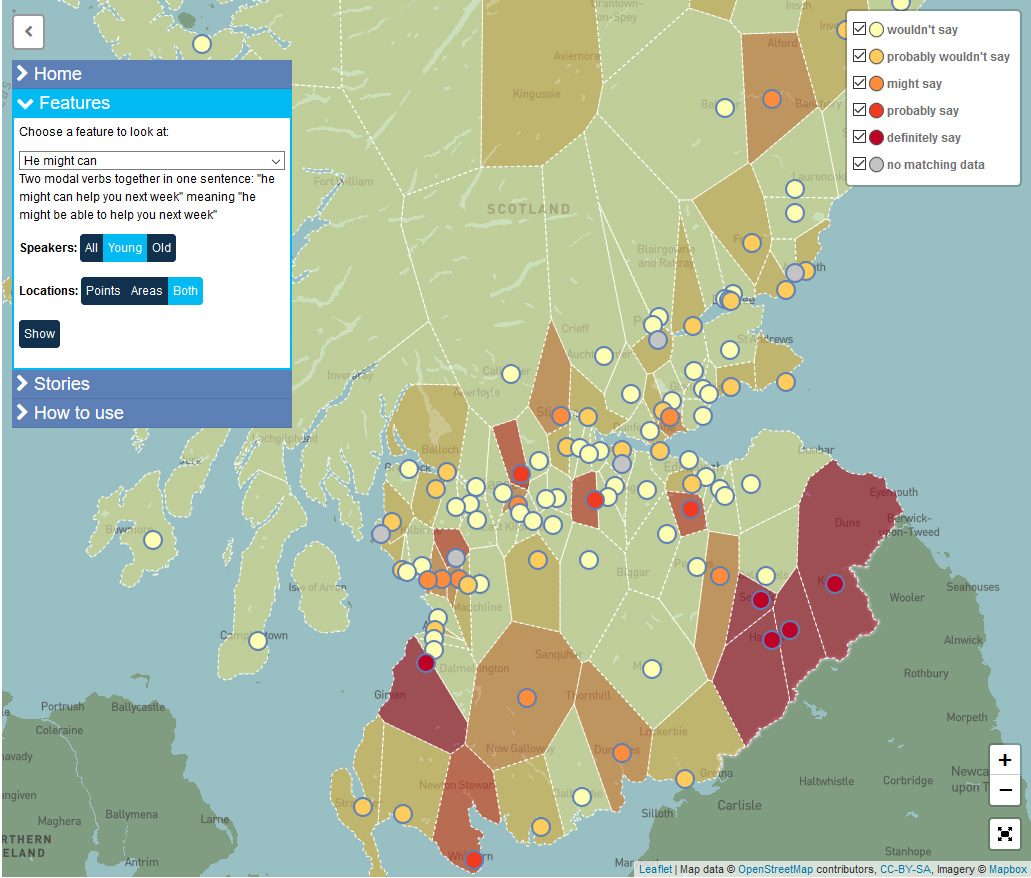 In addition to updating the area displays I still need to add in the sound samples and the groups, which will require updates to the API.  Adding in groups might take some work as I’ll need to find a way of colour coding not just the markers but the areas too.  I’ll be continuing with this next week.

In addition to working for SCOSYA I had a Historical Thesaurus meeting with Marc and Fraser, which lasted most of Wednesday morning.  After quite a long period we are now returning to the seemingly never-ending task of linking up the HT and OED datasets.  I had spent a couple of days working on scripts after our previous meeting several weeks ago, and created a summary of what the scripts did for our meeting, but unfortunately no-one could really remember why the requests for the scripts had been made so it looks very much like none of the work is gong to be put to use.  It seems to be a slightly disheartening pattern that I get asked to create lots of new scripts at these meetings, which I spend several days doing, but then no-one really does much with the scripts or their outputs and then at the next meeting I’m asked to create another series of scripts, and then the same thing happens again.  After this week’s meeting I have more scripts to write again, but I’m rather busy with more pressing deadlines (e.g. for SCOSYA) so I’m not going to be able to spend much time writing them for a while.

Also this week I did some further work for the DSL.  I managed to log into the editor server that the DSL uses and ran a script that Thomas Widmann created that merges all of the most recently edited data and formats it all as a big XML file.  I generated such files for both DOST and SND and saved them to my desktop PC.  I have a couple of questions about the data that need answered (e.g. there are new fields in the metadata section of the entries and I’m not sure how these need to be used) but once that’s done I’ll be able to write a script to chop up the XML files, extract individual entries and upload them to a new version of the database in order for DSL staff to compare the new versions with the existing online versions.

Next week we’re hoping to go live with a new version of the DSL website that as a front-end that uses WordPress.  It has been in development for quite a while on a test server, and although the user interface is not much different the structure of the site and a lot of the ancillary content is very different.