The Metaphor Map of English shows the metaphorical links which have been identified between different areas of meaning. These links can be from the Anglo-Saxon period right up to the present day so the map covers 1300 years of the English language. Find out more
The resource provides ultrasound tongue imaging (UTI) and lip video of speech, magnetic resonance imaging (MRI) video of speech, and 2D midsagittal head animations based on MRI and UTI data. Find out more
The Scots Syntax Atlas presents the results of over 100,000+ acceptability judgments from over 500 speakers on over 250 morphosyntactic phenomena. The Atlas also contains a text-to-sound aligned corpus of spoken data totalling 275 hours and over 3 million words. Find out more
The Digital Catalogue documents, visually and textually, the first ten years of Andy Goldsworthy's ephemeral, outdoor practice. It replicates Goldsworthy's Slide Cabinet Index, and includes previously unpublished material from Goldsworthy's Sketchbook Diaries. Find out more
The project provides a richly-illustrated Catalogue of all known architectural projects by Charles Rennie Mackintosh, including over 1200 drawings by Mackintosh and the practice, analytical and contextual essays, a timeline and glossary. Find out more
The University of Glasgow’s Historical Thesaurus of English is a unique resource charting the development of meaning in the huge and varied vocabulary of English. It consists of almost every recorded word in English from Anglo-Saxon times to the present day, all arranged into detailed hierarchies of meaning. Find out more
As told by some of Scotland's best writers, and illustrated with thousands of images from the collections of the city's world-famous libraries, museums and universities. From football to fashions, Auchenshuggle to Yoker, you'll find it all here. Find out more
The resource includes historical research for all Berwickshire place-names on the Ordnance Survey 1:50,000 Landranger map, including more than 1,600 place-names and 7,000 historical forms presented via a series of interactive maps. Find out more
A database of all known people of Scotland between 1093 and 1314 mentioned in over 8600 contemporary documents. It is also being extended to 1371 to include all those lands, peoples and relationships mentioned in royal charters between 1314 and 1371. Find out more
The Scottish Corpora project has created large electronic corpora of written and spoken texts for the languages of Scotland, featuring nearly 4.6 million words of text, with audio recordings to accompany many of the spoken texts. Find out more

I spent about half of this week working on the SCOSYA project.  On Monday I met with Jennifer and E to discuss a new aspect of the project that will be aimed primarily at school children.  I can’t say much about it yet as we’re still just getting some ideas together, but it will allow users to submit their own questionnaire responses and see the results.  I also started working with the location data that the project’s researchers had completed mapping out.  As mentioned in previous posts, I had initially created Voronoi diagrams that extrapolate our point-based questionnaire data to geographic areas.  The problem with this approach was that the areas were generated purely on the basis of the position of the points and did not take into consideration things like the varying coastline of Scotland or the fact that a location on one side of a body of water (e.g. the Firth of Forth) should not really extend into the other side, giving the impression that a feature is exhibited in places it quite clearly doesn’t.  Having the areas extend over water also made it difficult to see the outline of Scotland and to get an impression of which cell corresponded to which area.  So instead of this purely computational approach to generating geographical areas we decided to create them manually, using the Voronoi areas as a starting point, but tweaking them to take geographical features into consideration.   I’d generated the Voronoi cells as GeoJSON files and the researchers then used this very useful online tool https://geoman.io/studio to import the shapes and tweak them, saving them in multiple files as their large size caused some issues with browsers.

Upon receiving these files I then had to extract the data for each individual shape and work out which of our questionnaire locations the shape corresponded to, before adding the data to the database.  Although GeoJSON allows you to incorporate any data you like, in addition to the latitude / longitude pairings, I was not able to incorporate location names and IDs into the GeoJSON file I generated using the Voronoi library (it just didn’t work – see an earlier post for more information), meaning this ‘which shape corresponds to which location’ process needed to be done manually.  This involved grabbing the data for an individual location from the GeoJSON files, saving this and importing it into the GeoMan website, comparing the shape to my initial Voronoi map to find the questionnaire location contained within the area, adding this information to the GeoJOSN and then uploading it to the database.  There were 147 areas to do, and the process took slightly over a day to complete.

With all of the area data associated with questionnaire locations in the database I could then begin to work on an updated ‘storymap’ interface that would use this data.  I’m basing this new interface on Leaflet’s choropleth example: https://leafletjs.com/examples/choropleth/ which is a really nice interface and is very similar to what we require.  My initial task was to try and get the data out of the database and formatted in such a way that it could appear on the map.  This involved updating the SCOSYA API to incorporate the GeoJSON output for each location, which turned out to be slightly tricky, as my API automatically converts the data exported from the database (e.g. arrays and such things) into JSON using PHP’s json_encode function.  However, applying this to data that is already encoded as JSON (i.e. the new GeoJSON data) results in that data being treated as a string rather than as a JSON object, so the output was garbled.  Instead I had to ensure that the json_encode function was applied to every bit of data except the GeoJSON data, and once I’d done this the API outputted the GeoJSON data in such a way as to ensure any JavaScript could work with it.

I then produced a ‘proof of concept’ that simply grabbed the location data, pulled all the GeoJSON for each location together and processed it via Leaflet to produce area overlays, as you can see in the following screenshot: 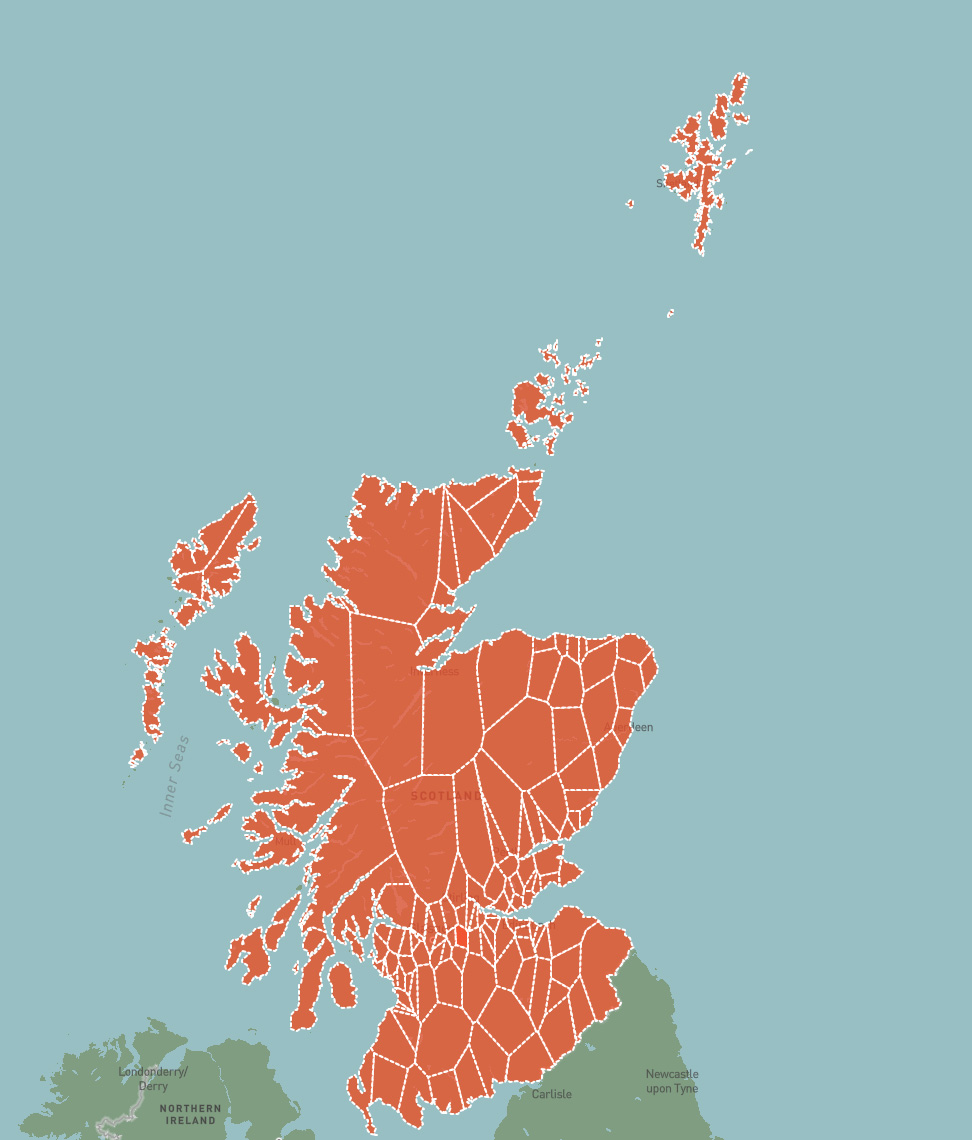 With this in place I then began looking at how to incorporate our intended ‘story’ interface with the Choropleth map – namely working with a number of ‘slides’ that a user can navigate between, with a different dataset potentially being loaded and displayed on each slide, and different position and zoom levels being set on each slide.  This is actually proving to be quite a complicated task, as much of the code I’d written for my previous Voronoi version of the storymap was using older, obsolete libraries.  Thankfully with the new approach I’m able to use the latest version of Leaflet, meaning features like the ‘full screen’ option and smoother panning and zooming will work. 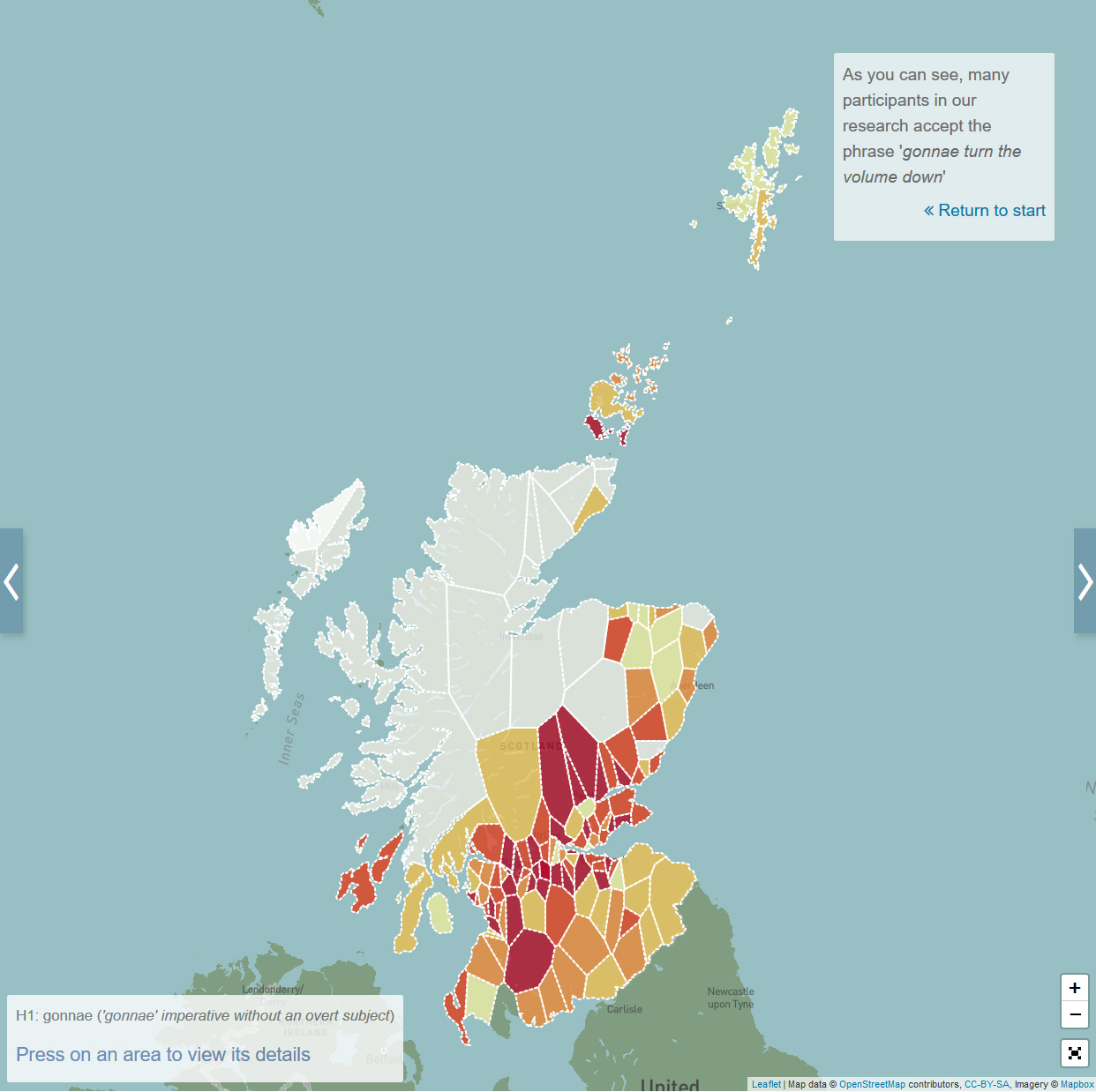 There is still a lot to do, though.  One area is missing its data, which I need to fix.  Also the ‘click on an area’ functionality is not yet working.  Locations as map points still need to be added in too, and the formatting of the areas still needs some work.  Also, the pan and zoom functionality isn’t there yet either.  However, I hope to get all of this working next week.

Also this week I had had a chat with Gavin Miller about the website for his new Medical Humanities project.  We have been granted the top-level ‘.ac.uk’ domain we’d requested so we can now make a start on the website itself.  I also made some further tweaks to the RNSN data, based on feedback.  I also spent about a day this week working on the REELS project, creating a script that would output all of the data in the format that is required for printing.  The tool allows you to select one or more parishes, or to leave the selection blank to export data for all parishes.  It then formats this in the same way as the printed place-name surveys, such as the Place-Names of Fife.  The resulting output can then be pasted into Word and all formatting will be retained, which will allow the team to finalise the material for publication.

I spent the rest of the week working on Historical Thesaurus tasks.  I met with Marc and Fraser on Friday, and ahead of this meeting I spent some time starting to look at matching up lexemes in the HT and OED datasets.  This involved adding seven new fields to the HT’s lexeme database to track the connection (which needs up to four fields) and to note the status of the connection (e.g. whether it was a manual or automatic match, which particular process was applied).  I then ran a script that matched up all lexemes that are found in matched categories where every HT lexeme matches an OED lexeme (based on the ‘stripped’ word field plus first dates).

When we met on Friday we figured out another big long list of updates and new experiments that I would carry out over the next few weeks, but Marc spotted a bit of a flaw in the way we are linking up HT and OED lexemes.  In order to ensure the correct OED lexeme is uniquely identified we rely on the OED’s category ID field.  However, this is likely to be volatile:  during future revisions some words will be moved between categories.  Therefore we can’t rely on the category ID field as a means of uniquely identifying an OED lexeme.  This will be a major problem when dealing with future updates from the OED ad we will need to try and find a solution – for example updating the OED data structure so that the current category ID is retained in a static field.  This will need further investigation next week.