The Scots Syntax Atlas presents the results of over 100,000+ acceptability judgments from over 500 speakers on over 250 morphosyntactic phenomena. The Atlas also contains a text-to-sound aligned corpus of spoken data totalling 275 hours and over 3 million words. Find out more
The resource includes historical research for all Berwickshire place-names on the Ordnance Survey 1:50,000 Landranger map, including more than 1,600 place-names and 7,000 historical forms presented via a series of interactive maps. Find out more
The project provides a richly-illustrated Catalogue of all known architectural projects by Charles Rennie Mackintosh, including over 1200 drawings by Mackintosh and the practice, analytical and contextual essays, a timeline and glossary. Find out more
The Metaphor Map of English shows the metaphorical links which have been identified between different areas of meaning. These links can be from the Anglo-Saxon period right up to the present day so the map covers 1300 years of the English language. Find out more
The project explores Romantic-period accounts of journeys into Wales and Scotland with a focus on the writings of the Flintshire naturalist and antiquarian Thomas Pennant (1726-1798), whose published Tours of both countries did so much to awaken public interest in the ‘peripheries’ of Britain. Find out more
A publicly accessible, online scholarly edition of one of the most important archives of eighteenth-century medical "consultation letters", containing more than 20,000 digitised pages. Find out more
A database of all known people of Scotland between 1093 and 1314 mentioned in over 8600 contemporary documents. It is also being extended to 1371 to include all those lands, peoples and relationships mentioned in royal charters between 1314 and 1371. Find out more
James McNeill Whistler (1834-1903) was a major figure in 19th century printmaking and created 490 etchings. Over 9500 impressions of these prints have been located and investigated during the project, which completes a series of catalogues raisonnés of Whistler's oeuvre. Find out more
Bess of Hardwick's Letters brings together, for the first time, the remarkable letters written to and from Bess of Hardwick (c.1521/2 or 1527-1608), one of Elizabethan England's most famous figures. Find out more
As told by some of Scotland's best writers, and illustrated with thousands of images from the collections of the city's world-famous libraries, museums and universities. From football to fashions, Auchenshuggle to Yoker, you'll find it all here. Find out more

I worked on a lot of different projects this week, which was a bit of a change from last week’s focus on a single project.  For the RNSN project I investigated how to create an over-arching timeline that would pull in data from all of the individual timelines I’d created previously.  I had investigated a variety of timeline libraries, but none of them really offered as good a level of functionality as the timeline.js library I was already using for the individual timelines, so I decided to focus on adapting this library to work with multiple timelines.  Thankfully the library already included support for ‘groups’, and by assigning slides to the same group they would appear on different ‘tracks’ in the timeline summary section.  For my initial version I created a ‘group’ for each of the individual timelines, and a further ‘group’ for the spreadsheet of ‘major events’ that Kirsteen had previously sent me to give context to the individual stories.  This initial version mostly worked pretty well, although I needed to tweak the CSS and some of the library’s JavaScript somewhat in order to make the group names more clearly visible in the summary section and to make the group names appear within the main body of the slides too.  On Friday I met with Kirsteen and Brianna, the project RA to discuss our future plans for the project and also to discuss the new timeline.  Kirsteen was very happy with how the timeline was coming along, and during the meeting I proposed some further changes.  In order to reduce the amount of space taken up by the summary section I suggested we have a ‘track’ for each nation rather than each song, and I suggested we ensure there is a link to each song’s full timeline from every slide as well.  Kirsteen suggested changing the colour of the contextual slides to more clearly differentiate them from the regular slides too.  I spent some further time implementing these updates and by the end of the week things were looking good.  I’ll still need to add in more content and to check how the interface works on narrower screens, but I’m pretty happy with how things are working out.  Here’s a screenshot of the timeline as it currently looks: 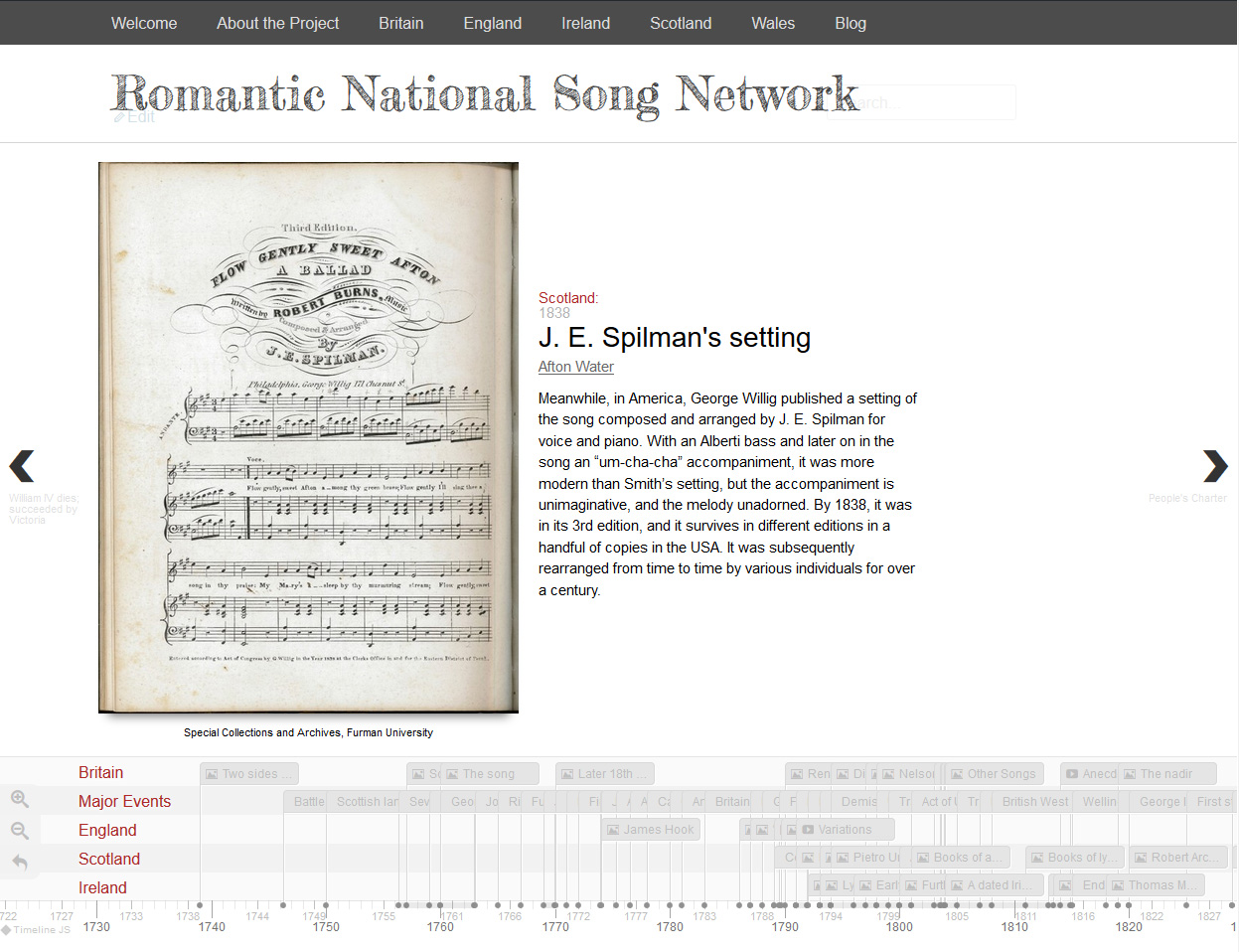 I also spent a bit of time working on Matthew Creasy’s Decadence and Translation project.  Matthew had digitised a number of pages of short French poems that he wanted to make available as a sort of mini digital edition that would involve a zoomable / panable interface to the images, plus textual transcriptions and translations with embedded notes.  Thankfully I’ve had quite a bit of previous experience with such interfaces (e.g. the ‘Digital Ode’ for the New Modernist Editing project) and could use a lot of existing code.  I couldn’t make things exactly the same as Matthew wanted people to be able to comment on each page, and as the rest of the project website is a WordPress site, it made sense to use WordPress’s commenting features.  For this reason I created a WordPress page for each digitised image, and embedded a small amount of code within each page.  The actual content was stored in a JSON file I created, and the only change needed between individual WordPress pages was to change a numerical ID.  My JavaScript code would then grab this ID, pull in the JSON file and extract the entry with the corresponding number, find the image tiles and set up an OpenLayers interface to allow the image to be zoomed, pull in the translations, transcriptions, notes and other things as HTML text and format everything for display.  WordPress would then add in its regular comment boxes and that would be that.  Matthew had sent me test information about six images and I added all of this to my JSON file.  Everything seems to be working pretty well so far, and I just need further input from Matthew now.  Here’s how things currently look: 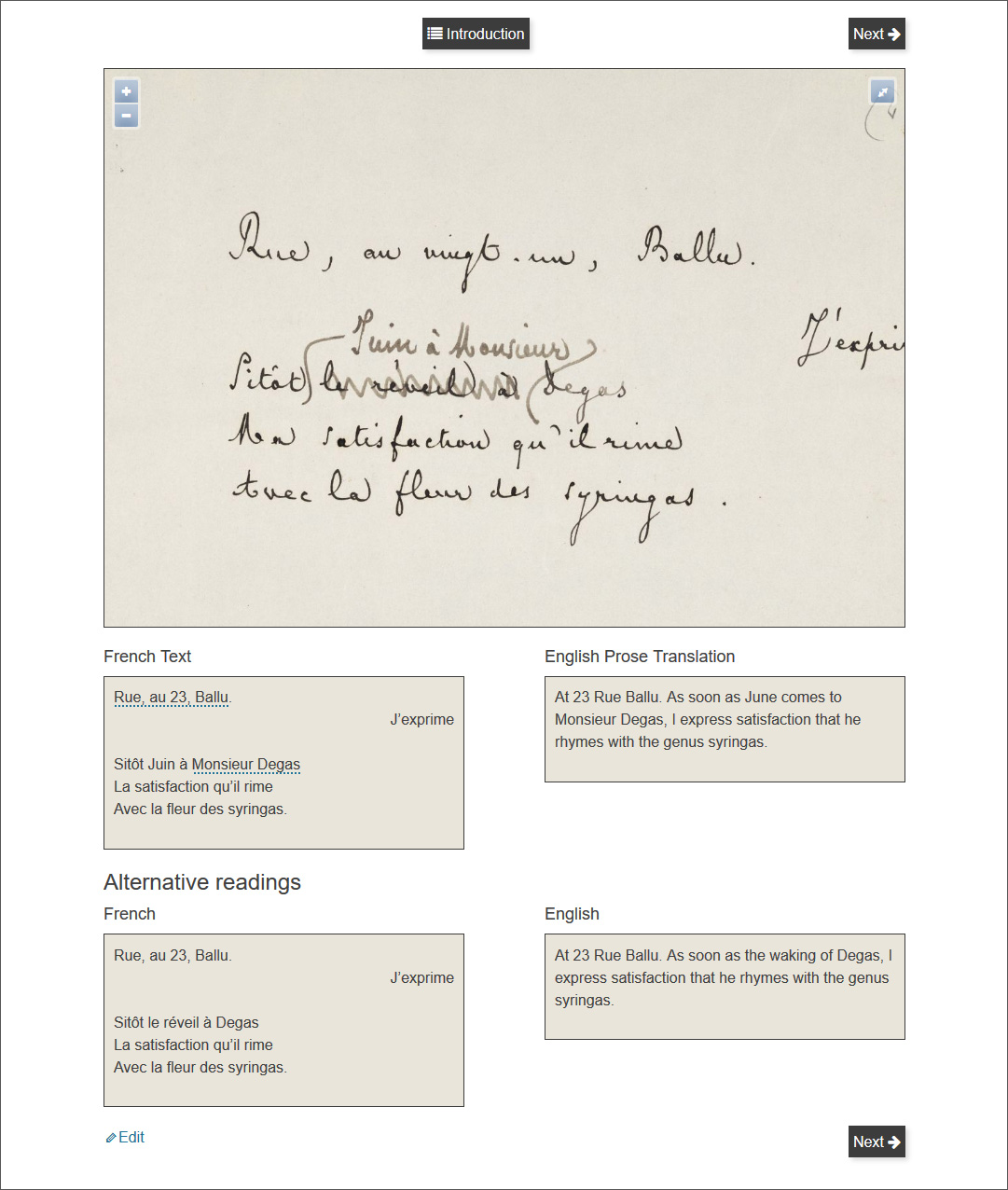 Also this week I created an updated of a Data Management Plan for Thomas Clancy (the fourth version and possibly the last), updated the test version of the SCOSYA atlas to limit the attributes contained in it before a class uses the interface next week, made some further (and possibly final) tweaks to the Bilingual Thesaurus and migrated the Thesaurus of Old English to our new Thesaurus domain and ensured the site and its data all worked in the new location, which thankfully it did.  I’ll need to hear back from Marc and Fraser before I make this new version ‘live’, though.  I also made a small tweak to the DSL website, started to think about the next batch of updates that will be required to link up the HT and OED data, and did some App store related duties for someone elsewhere in the University.  So all in all a pretty busy week.