The project explores Romantic-period accounts of journeys into Wales and Scotland with a focus on the writings of the Flintshire naturalist and antiquarian Thomas Pennant (1726-1798), whose published Tours of both countries did so much to awaken public interest in the ‘peripheries’ of Britain. Find out more
The Scottish Corpora project has created large electronic corpora of written and spoken texts for the languages of Scotland, featuring nearly 4.6 million words of text, with audio recordings to accompany many of the spoken texts. Find out more
A database of all known people of Scotland between 1093 and 1314 mentioned in over 8600 contemporary documents. It is also being extended to 1371 to include all those lands, peoples and relationships mentioned in royal charters between 1314 and 1371. Find out more
The online catalogue includes some 550 oil paintings and over 1700 works on paper dating from ca 1850 to 1903. The evolution of each painting from sketch to final oil is described and illustrated. Find out more
James McNeill Whistler (1834-1903) was a major figure in 19th century printmaking and created 490 etchings. Over 9500 impressions of these prints have been located and investigated during the project, which completes a series of catalogues raisonnés of Whistler's oeuvre. Find out more
Bess of Hardwick's Letters brings together, for the first time, the remarkable letters written to and from Bess of Hardwick (c.1521/2 or 1527-1608), one of Elizabethan England's most famous figures. Find out more
As told by some of Scotland's best writers, and illustrated with thousands of images from the collections of the city's world-famous libraries, museums and universities. From football to fashions, Auchenshuggle to Yoker, you'll find it all here. Find out more
The Scots Syntax Atlas presents the results of over 100,000+ acceptability judgments from over 500 speakers on over 250 morphosyntactic phenomena. The Atlas also contains a text-to-sound aligned corpus of spoken data totalling 275 hours and over 3 million words. Find out more
The project provides a richly-illustrated Catalogue of all known architectural projects by Charles Rennie Mackintosh, including over 1200 drawings by Mackintosh and the practice, analytical and contextual essays, a timeline and glossary. Find out more
The resource includes historical research for all Berwickshire place-names on the Ordnance Survey 1:50,000 Landranger map, including more than 1,600 place-names and 7,000 historical forms presented via a series of interactive maps. Find out more

I took Friday off this week, in the run-up to Christmas, and spent the remaining four days trying to finish some of my outstanding tasks before the holidays begin.  This included finishing the ‘song story’ I’d left half finished last week for the RNSN project, starting and completing the other ‘song story’ that I had in my ‘to do’ list and updating two other stories to add in audio files.  All this required a lot of adapting images, uploading and linking to files, writing HTML and other such trivial but rather time-consuming tasks.  It probably took the best part of two days to get it all done, but things are looking great and I reckon the bulk of the work on these song stories is now complete.  We’re hoping to launch them early next year, at which point I’ll be able to share the URLs.

I also continued to talk Joanna Kopacyk with the proposal she’s putting together.  This included having a long email conversation with both her and Luca, plus meeting in person with Joanna to go through some of the technical aspects that still needed a bit of thought.  Things seem to be coming together well now and hopefully Joanna will be able to submit the proposal in the new year.

Bryony Randall is also working on a proposal, this time a follow-on funding bid.  She’d set up a project website on WordPress.com, but it was filled with horribly intrusive adverts, and I thought it would give a better impression to reviewers if we migrated the site to a Glasgow server.  I started this process last week and completed it this week.  The new website can be found here: https://newmodernistediting.glasgow.ac.uk/

I also spent a couple of hours on the Bilingual Thesaurus, changing the way the selection of languages of origin and citation are handled on the search page.  There are so many languages and it had been suggested that higher-level groupings could help ensure users selected all of the appropriate options.  So, for example, a new top level group would be ‘Celtic’ and then within this there would be Irish, Old Irish, Scots Gaelic etc.  Each group has a checkbox and if you click on it then everything within the group is checked.  Clicking again deselects everything, as the screenshot below demonstrates.  I think it works pretty well. 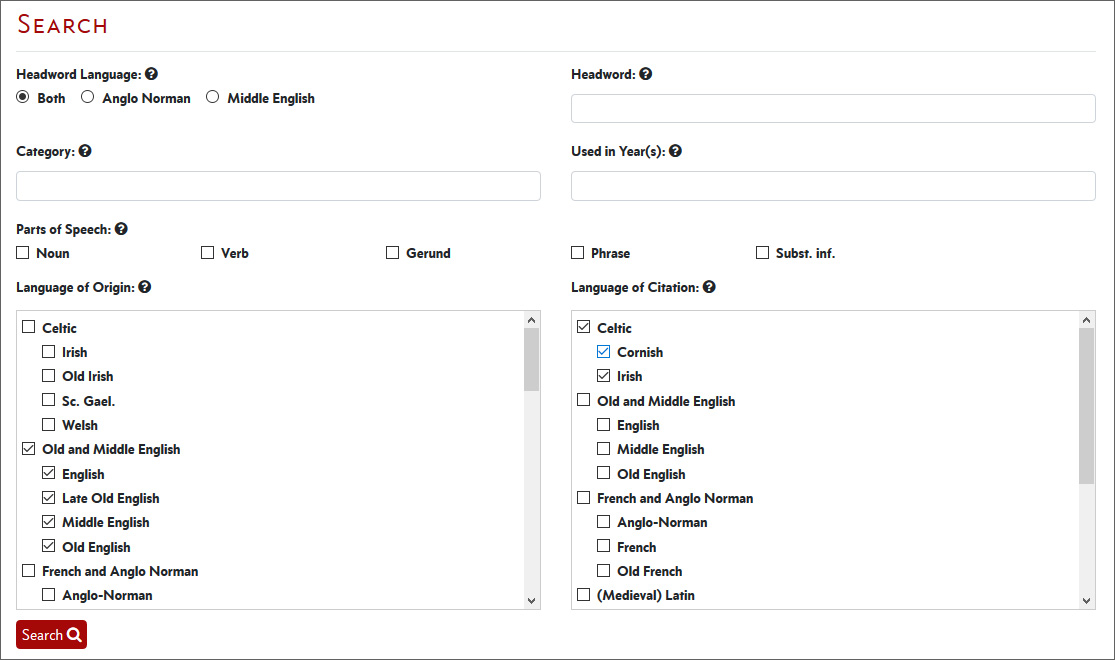 I could hardly let a week pass without continuing to work on the HT / OED category linking task, and therefore I spent several further hours working on this.  I completed a script that compares all lexemes and their search terms to try and find matches.  For this to work I also had to execute a script to generate suitable search terms for the OED data (e.g. variants with / without brackets).  The comparison script takes ages to run as it has to compare every word in every unmatched OED category to every word in every unmatched HT category.  The script has identified a number of new potential matches that will hopefully be of some use.  It also unfortunately identified many OED lexemes that just don’t have any match in the HT data, despite having a ‘GHT date’, which means there should be a matching HT word somewhere.  It looks like some erroneous matches might have crept into our matching processes.  In some cases the issue is merely that the OED have changed the lexeme so it no longer matches (e.g. making a word plural).  But in other cases things look a little weird.