The Digital Catalogue documents, visually and textually, the first ten years of Andy Goldsworthy's ephemeral, outdoor practice. It replicates Goldsworthy's Slide Cabinet Index, and includes previously unpublished material from Goldsworthy's Sketchbook Diaries. Find out more
The project explores Romantic-period accounts of journeys into Wales and Scotland with a focus on the writings of the Flintshire naturalist and antiquarian Thomas Pennant (1726-1798), whose published Tours of both countries did so much to awaken public interest in the ‘peripheries’ of Britain. Find out more
The Metaphor Map of English shows the metaphorical links which have been identified between different areas of meaning. These links can be from the Anglo-Saxon period right up to the present day so the map covers 1300 years of the English language. Find out more
James McNeill Whistler (1834-1903) was a major figure in 19th century printmaking and created 490 etchings. Over 9500 impressions of these prints have been located and investigated during the project, which completes a series of catalogues raisonnés of Whistler's oeuvre. Find out more
The online catalogue includes some 550 oil paintings and over 1700 works on paper dating from ca 1850 to 1903. The evolution of each painting from sketch to final oil is described and illustrated. Find out more
The Scottish Corpora project has created large electronic corpora of written and spoken texts for the languages of Scotland, featuring nearly 4.6 million words of text, with audio recordings to accompany many of the spoken texts. Find out more
A database of all known people of Scotland between 1093 and 1314 mentioned in over 8600 contemporary documents. It is also being extended to 1371 to include all those lands, peoples and relationships mentioned in royal charters between 1314 and 1371. Find out more
A publicly accessible, online scholarly edition of one of the most important archives of eighteenth-century medical "consultation letters", containing more than 20,000 digitised pages. Find out more
The resource includes historical research for all Berwickshire place-names on the Ordnance Survey 1:50,000 Landranger map, including more than 1,600 place-names and 7,000 historical forms presented via a series of interactive maps. Find out more
The Scots Syntax Atlas presents the results of over 100,000+ acceptability judgments from over 500 speakers on over 250 morphosyntactic phenomena. The Atlas also contains a text-to-sound aligned corpus of spoken data totalling 275 hours and over 3 million words. Find out more

I met with Matthew Creasey from English Literature this week to discuss a project website for his recently funded ‘Decadence and Translation Network’ project.  The project website is going to be a fairly straightforward WordPress site, but there will also be a digital edition hosted through it, which will be sort of similar to what I did for the Woolf short story for the New Modernist Editing project (https://nme-digital-ode.glasgow.ac.uk/).  I set up an initial site for Matthew and will work on it further once he receives the images he’d like to use in the site design.

I also gave some further help with Craig Lamont in getting access to Google Analytics for the Ramsay project, and spoke to Quintin Cutts in Computing Science about publishing an iOS app they have created.  I also met with Graeme Cannon to discuss AHRC Data Management Plans, as he’s been asked to contribute to one and hasn’t worked with a plan yet.  I also made a couple of minor fixes to the RNSN timeline and storymap pages and updated the ‘attribution’ text on the REELS map.  There’s quite a lot of text relating to map attribution and copyright so instead of cluttering up the bottom of the maps I’ve moved everything into a new pop-up window.  In addition to the statements about the map tilesets I’ve also added in a statement about our place-name data, the copyright statement that’s required for the parish boundaries, a note about Leaflet and attribution for the map icons too. I think it works a lot better.

Other than these issues I mainly focussed on three projects this week.  For the SCOSYA project I tackled an issue with the ‘or’ search, that was causing the search to not display results in a properly categorised manner when the ‘rated by’ option was set to more than one.  It took a while to work through the code, and my brain hurt a bit by the end of it, but thankfully I managed to figured out what the problem was.  Basically when ‘rated by’ was set to 1 the code only needed to match a single result for a location.  If it found one that matched then the code stopped looking any further.  However, when multiple results need to be found that match, the code didn’t stop looking, but instead had to cycle through all other results for the location, including those for other codes.  So if it found two matches that met the criteria for ‘A1’ it would still go on looking through the ‘A2’ results as well, would realise these didn’t match and set the flag to ‘N’.  I was keeping a count of the number of matches but this part of the code was never reached if the ‘N’ flag was set.  I’ve now updated how the checking for matches works and thankfully the ‘Or’ search now works when you set a ‘rated by’ to be more than 1.

For the reworking of the Seeing Speech and Dynamic Dialects websites I decided for focus on the accent map and accent chart features of Dynamic Dialects.  For the map I switched to using the Leaflet.js mapping library rather than Google Maps.  This is mainly because I prefer Leaflet, you can use it with lots of different map tilesets, data doesn’t have to be posted to Google for the map to work and other reasons, such as the fact that you can zoom in and out with the scrollwheel of a mouse without having to also press ‘ctrl’, which gets really annoying with the existing map.  I’ve removed the option to switch from map to satellite and streetview as well as these didn’t really seem to serve much purpose.  The new base map is a free map supplied by Esri (a big GIS company).  It isn’t cluttered up with commercial map markers when zoomed in, unlike Google.

You can now hover over a map marker to view the location and area details.  Clicking on a marker opens up a pop-up containing all of the information about the speaker and links to the videos as ‘play’ buttons.  Note that unlike the existing map, buttons for sounds only appear if there are actually videos for them.  E.g. on the existing map for Oregon there are links for every video type, but only one (spontaneous) actually works.

Clicking on a ‘play’ button brings down the video overlay, as with the other pages I’ve redeveloped.  As with other pages, the URL is updated to allow direct linking to the video.  Note that any map pop-up you have open does not remain open when you follow such a link, but as the location appears in the video overlay header it should be easy for a user to figure out where the relevant marker is when they close the overlay.

For the Accent Chart page I’ve added in some filter options, allowing you to limit the display of data to a particular area, age range and / or gender.  These options can be combined, and also bookmarked / shared / cited (e.g. so you can follow a link to view only those rows where the area is ‘Scotland’ the age range is ’18-24’ and the gender is ‘F’).  I’ve also added a row hover-over colour to help you keep your eye on a row.  As with other pages, click on the ‘play’ button and a video overlay drops down.  You can also cite / bookmark specific videos.

I’ve made the table columns on this page as narrow as possible, but it’s still a lot of columns and unless you have a very wide monitor you’re going to have to scroll to see everything.  There are two ways I can set this up.  Firstly the table area of the page itself can be set to scroll horizontally.  This keeps the table within the boundaries of the page structure and looks more tidy, but it means you have to vertically scroll to the bottom of the table before you see the scrollbar, which is probably going to get annoying and may be confusing.  The alternative is to allow the table to break out of the boundaries of the page.  This looks messier, but the advantage is the horizontal scrollbar then appears at the bottom of your browser window and is always visible, even if you’re looking at the top section of the table.  I’ve asked Jane and Eleanor how they would prefer the page to work.

My final project of the week was the Historical Thesaurus.  I spent some time working on the new domain names we’re setting up for the thesaurus, and on Thursday I attended the lectures for the new lectureship post for the Thesaurus.  It was very interesting to hear the speakers and their potential plans for the Thesaurus in future, but obviously I can’t say much more about the lectures here.  I also attended the retirement do for Flora Edmonds on Thursday afternoon.  Flora has been a huge part of the thesaurus team since the early days of its switch to digital and I think she had a wonderful send-off from the people in Critical Studies she’s worked closely with over the years.

On Friday I spent some time adding the mini timelines to the search results page.  I haven’t updated the ‘live’ page yet but here’s an image showing how they will look: 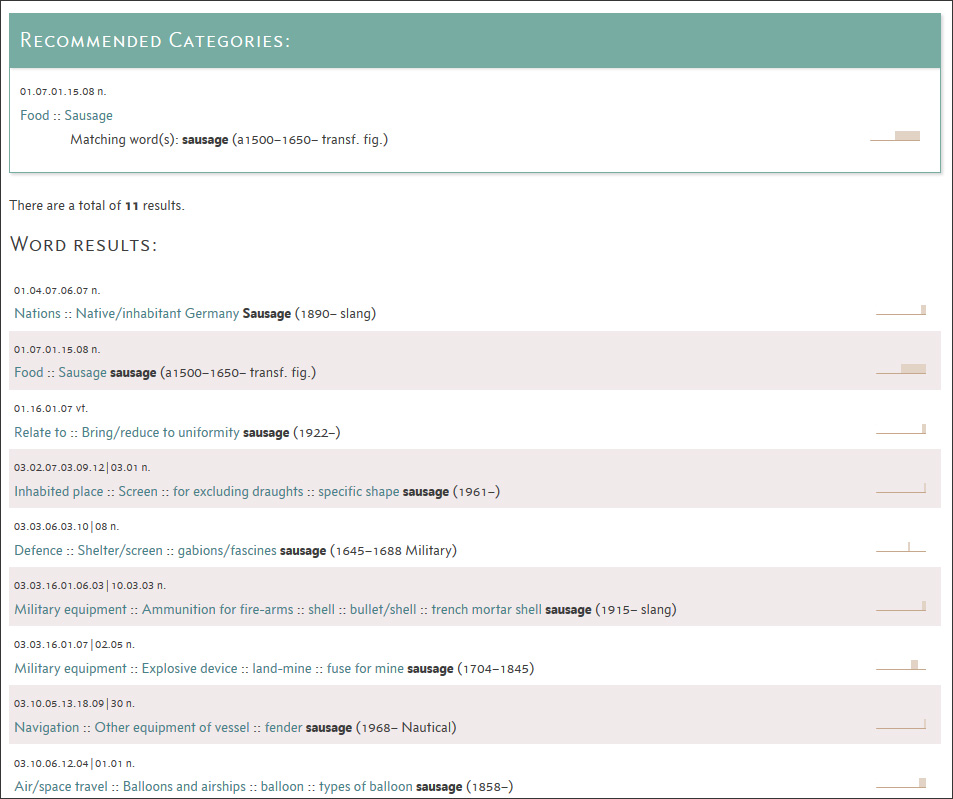 It’s been a little tricky to add the mini-timelines in as the search results page is structured rather differently to the ‘browse’ page.  However, they’re in place now, both for general ‘word’ results  and for words within the ‘Recommended Categories’ section.  Note that if you’ve turned mini-timelines off in the ‘browse’ page they stay off on this page too.

We will probably want to add a few more things in before we make this page live.  We could add in the full timeline visualisation pop-up, that I could set up to feature all search results, or at least the results for the current page of search results.  If I did this I would need to redevelop the visualisation to try and squeeze in at least some of the category information and the pos, otherwise the listed words might all be the same.  I will probably try to add in each word’s category and pos, which should provide just enough context, although subcat names like ‘pertaining to’ aren’t going to be very helpful.

We will also need to consider adding in some sorting options.  Currently the results are ordered by ‘Tier’ number, but I could add in options to order results by ‘first attested date’, ‘alphabetically’ and ‘length of attestation’.  ‘Alphabetically’ isn’t going to be hugely useful if you’re looking at a page of ‘sausage’ results, but will be useful for wildcard searches (e.g. ‘*sage’) and other searches like dates.  I would imagine ordering results by ‘length of attestation’ is going to be rather useful in picking out ‘important’ words.  I’ll hopefully have some time to look into these options next week.