As told by some of Scotland's best writers, and illustrated with thousands of images from the collections of the city's world-famous libraries, museums and universities. From football to fashions, Auchenshuggle to Yoker, you'll find it all here. Find out more
The project provides a richly-illustrated Catalogue of all known architectural projects by Charles Rennie Mackintosh, including over 1200 drawings by Mackintosh and the practice, analytical and contextual essays, a timeline and glossary. Find out more
The project explores Romantic-period accounts of journeys into Wales and Scotland with a focus on the writings of the Flintshire naturalist and antiquarian Thomas Pennant (1726-1798), whose published Tours of both countries did so much to awaken public interest in the ‘peripheries’ of Britain. Find out more
The resource includes historical research for all Berwickshire place-names on the Ordnance Survey 1:50,000 Landranger map, including more than 1,600 place-names and 7,000 historical forms presented via a series of interactive maps. Find out more
Bess of Hardwick's Letters brings together, for the first time, the remarkable letters written to and from Bess of Hardwick (c.1521/2 or 1527-1608), one of Elizabethan England's most famous figures. Find out more
The Scottish Corpora project has created large electronic corpora of written and spoken texts for the languages of Scotland, featuring nearly 4.6 million words of text, with audio recordings to accompany many of the spoken texts. Find out more
The resource provides ultrasound tongue imaging (UTI) and lip video of speech, magnetic resonance imaging (MRI) video of speech, and 2D midsagittal head animations based on MRI and UTI data. Find out more
James McNeill Whistler (1834-1903) was a major figure in 19th century printmaking and created 490 etchings. Over 9500 impressions of these prints have been located and investigated during the project, which completes a series of catalogues raisonnés of Whistler's oeuvre. Find out more
The Scots Syntax Atlas presents the results of over 100,000+ acceptability judgments from over 500 speakers on over 250 morphosyntactic phenomena. The Atlas also contains a text-to-sound aligned corpus of spoken data totalling 275 hours and over 3 million words. Find out more
A publicly accessible, online scholarly edition of one of the most important archives of eighteenth-century medical "consultation letters", containing more than 20,000 digitised pages. Find out more

I spent most of this week working on the new timeline features for the Historical Thesaurus.  Marc, Fraser and I had a useful meeting on Wednesday where we discussed some final tweaks to the mini-timelines and the category page in general, and also discussed some future updates to the sparklines.

I made the mini-timelines slightly smaller than they were previously, and Marc changed the colours used for them.  I also updated the script that generates the category page content via an AJAX call so that an additional ‘sort by’ option could be passed to it.  I then implemented sorting options that matched up with those available through the full Timeline feature, namely sorting by first attested date, alphabetically, and length of use.  I also updated this script to allow users to control whether the mini-timelines appear on the page or not.  With these options available via the back-end script I then set up the choices to be stored as a session variable, meaning the user’s choices are ‘remembered’ as they navigate throughout the site and can be applied automatically to the data.

While working on the sorting options I noticed that the alphabetical ordering of the main timeline didn’t properly order ashes and thorns – e.g. words beginning with these were appearing at the end of the list when ordered alphabetically.  I fixed this so that for ordering purposes an ash is considered ‘ae’ and a thorn ‘th’.  This doesn’t affect how words are displayed, just how they are ordered.

We also decided at the meeting that we would move the thesaurus sites that were on a dedicated (but old) server (namely HT, Mapping Metaphor, Thesaurus of Old English and a few others) to a more centrally hosted server that is more up to date.  This switch would allow these sites to be made available via HTTPS as opposed to HTTP and will free up the old server for us to use for other things, such as some potential corpus based resources.  Chris migrated the content over and after we’d sorted a couple of initial issues with the databases all of the sites appear to be working well.  It is also a really good thing to have the sites available via HTTPS.  We are also now considering setting up a top-level ‘.ac.uk’ address for the HT and spent some time making a case for this.

A fairly major feature I added to the HT this week was a ‘menu’ section for main categories, which contains some additional options, such as the options to change the sorting of the category pages and turn the mini-timelines on and off.  For the button to open the section I decided to use the ‘hamburger’ icon, which Marc favoured, rather than a cog, which I was initially thinking of using, because a cog suggests managing options whereas this section contains both options and additional features.  I initially tried adding the drop-down section as near to the icon as possible, but I didn’t like the way it split up the category information, so instead I set it to appear beneath the part of speech selection.  I think this will be ok as it’s not hugely far away from the icon.  I did wonder whether instead I should have a section that ‘slides up’ above the category heading, but decided this was a bad idea as if the user has the heading at the very top of the screen it might not be obvious that anything has happened.

The new section contains buttons to open the ‘timeline’ and ‘cite’ options.  I’ve expanded the text to read ‘Timeline visualization’ and ‘Cite this category’ respectively.  Below these buttons there are the options to sort the words.  Selecting a sort option reloads the content of the category pane (maincat and subcats), while keeping the drop-down area open.  Your choice is ‘remembered’ for the duration of your session, so you don’t have to keep changing the ordering as you navigate about.  Changing to another part of speech or to a different category closes the drop-down section.  I also updated the ‘There are xx words’ text to make it clearer how the words are ordered if the drop-down section is not open.

Below the sorting option is a further option that allows you to turn on or off the mini-timelines.  As with the sorting option, your choice is ‘remembered’.  I also added some tooltip text to the ‘hamburger’ icon, as I thought it was useful to have some detail about what the button does. 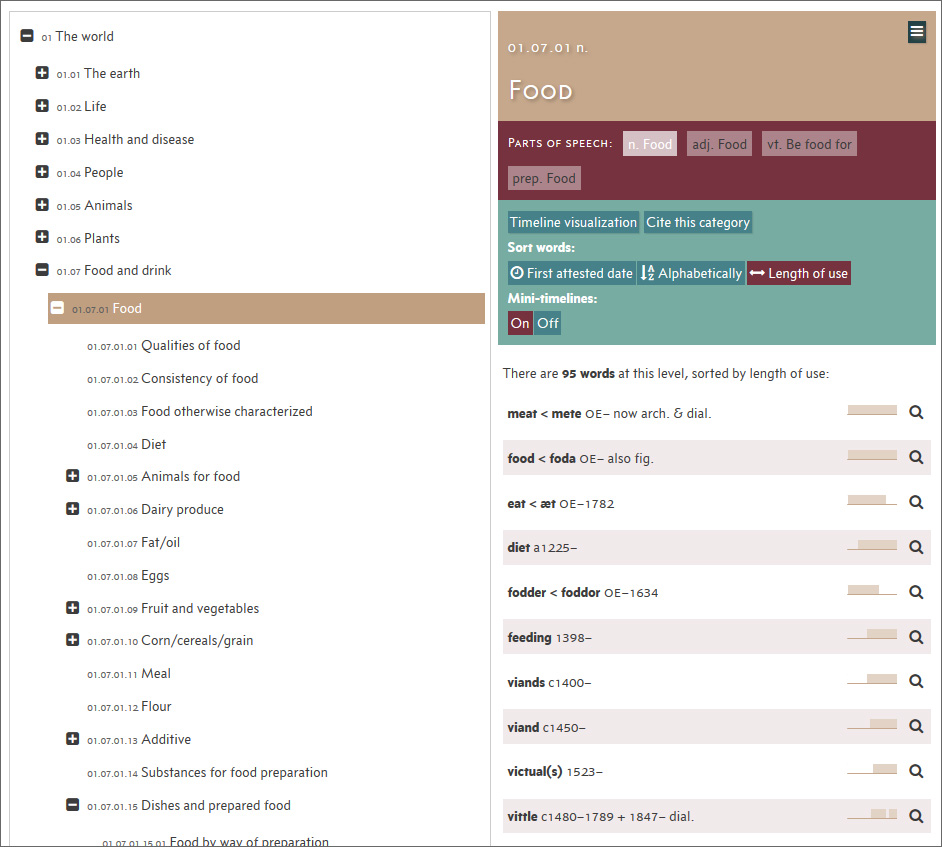 I spent some more time on the REELS project this week, as Eila had got back to me with some feedback about the front-end.  This included changing the ‘Other’ icon, which Eila didn’t like.  I wasn’t too keen on it either, was I was happy to change it.  I now use a sort of archway instead of the tall, thin monument, which I think works better.  I also removed non-Berwickshire parishes from the Advanced Search page, tweaked some of the site text and also fixed the search for element language, which I had inadvertently broken when changing the way date searches worked last week.

Also this week I fixed an issue with the SCOTS corpus, which was giving 403 errors instead of playing the audio and video files, and was giving no results on the Advanced Search page.  It turned out that this was being caused by a security patch that had been installed on the server recently, which was blocking legitimate requests for data.  I was also in touch with Scot Spurlock about his crowdsourcing project, that looks to be going ahead in some capacity, although not with the funding that was initially hoped for.

Finally, I had received some feedback from Faye Hammill and her project partners about the data management plan I’d written for her project.  I responded to some queries and finalised some other parts of the plan, sending off a rather extensive list of comments to her on Friday.