The project explores Romantic-period accounts of journeys into Wales and Scotland with a focus on the writings of the Flintshire naturalist and antiquarian Thomas Pennant (1726-1798), whose published Tours of both countries did so much to awaken public interest in the ‘peripheries’ of Britain. Find out more
The Scots Syntax Atlas presents the results of over 100,000+ acceptability judgments from over 500 speakers on over 250 morphosyntactic phenomena. The Atlas also contains a text-to-sound aligned corpus of spoken data totalling 275 hours and over 3 million words. Find out more
Bess of Hardwick's Letters brings together, for the first time, the remarkable letters written to and from Bess of Hardwick (c.1521/2 or 1527-1608), one of Elizabethan England's most famous figures. Find out more
The Digital Catalogue documents, visually and textually, the first ten years of Andy Goldsworthy's ephemeral, outdoor practice. It replicates Goldsworthy's Slide Cabinet Index, and includes previously unpublished material from Goldsworthy's Sketchbook Diaries. Find out more
The Scottish Corpora project has created large electronic corpora of written and spoken texts for the languages of Scotland, featuring nearly 4.6 million words of text, with audio recordings to accompany many of the spoken texts. Find out more
James McNeill Whistler (1834-1903) was a major figure in 19th century printmaking and created 490 etchings. Over 9500 impressions of these prints have been located and investigated during the project, which completes a series of catalogues raisonnés of Whistler's oeuvre. Find out more
A database of all known people of Scotland between 1093 and 1314 mentioned in over 8600 contemporary documents. It is also being extended to 1371 to include all those lands, peoples and relationships mentioned in royal charters between 1314 and 1371. Find out more
The resource provides ultrasound tongue imaging (UTI) and lip video of speech, magnetic resonance imaging (MRI) video of speech, and 2D midsagittal head animations based on MRI and UTI data. Find out more
The online catalogue includes some 550 oil paintings and over 1700 works on paper dating from ca 1850 to 1903. The evolution of each painting from sketch to final oil is described and illustrated. Find out more
As told by some of Scotland's best writers, and illustrated with thousands of images from the collections of the city's world-famous libraries, museums and universities. From football to fashions, Auchenshuggle to Yoker, you'll find it all here. Find out more

Monday this week was the May Day holiday, so it was a four-day week for me.  I divided my time primarily between REELS and Linguistic DNA and updates to the Historical Thesaurus timeline interface.  For REELS I contacted Chris Fleet at the NLS about using one of their base maps in our map interface.  I’d found one that was apparently free to use and I wanted to check we had the details and attribution right.  Thankfully we did, and Chris very helpfully suggested another base map of theirs that we might be able to incorporate too.  He also pointed me towards an amazing crowdsourced resource that they had set up that has gathered more than 2 million map labels from the OS six-inch to the mile, 1888-1913 maps (see http://geo.nls.uk/maps/gb1900/).  It’s very impressive.

I also tackled the issue of adding icons to the map for classification codes rather than just having coloured spots.  This is something I’d had in mind from the very start of the project, but I wasn’t sure how feasible it would be to incorporate.  I started off by trying to add in Font Awesome icons, which is pretty easy to do with a Leaflet plugin.  However, I soon realised that Font Awesome just didn’t have the range of icons that I required for things like ‘coastal’, ‘antiquity’ ‘ecclesiastical’ and the like.  Instead I found some more useful icons: https://mapicons.mapsmarker.com/category/markers/.  The icons are released under a Creative Commons license and are free to use.  Unfortunately they are PNG rather than SVG icons, so they won’t scale quite as nicely, but they don’t look too bad on an iPad’s ‘retina’ display, so I think they’ll do.  I created custom markers for each icon and gave them additional styling with CSS.  I updated the map legend to incorporate them as well, and I think they’re looking pretty good.  It’s certainly easier to tell at a glance what each marker represents.  Here’s a screenshot of how things currently look (but this of course still might change):

I also slightly changed all of the regular coloured dots on the map to give them a dark grey border, which helps them stand out a bit more on the maps, and I have updated the way map marker colours are used for the ‘start date’ and ‘altitude’ maps.  If you categorise the map by start date the marker colours now have a fixed gradient, ranging from dark blue for 1000-1099 to red for after 1900 (the idea being things that are in the distant past are ‘cold’ and more recent things are still ‘hot’).  Hopefully this will make it easier to tell at a glance which names are older and which are more recent.  Here’s an example: 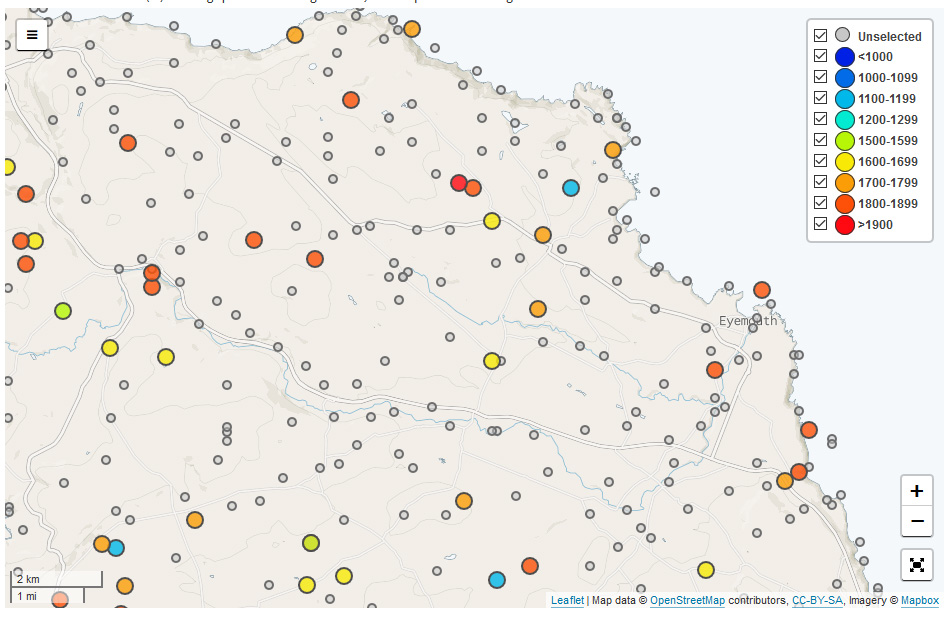 For the ‘categorised by altitude’ view I made the fixed gradient use the standard way of representing altitude on maps – ranging from dark green for low altitude, through browns and dark reds for high altitude, as this screenshot shows: 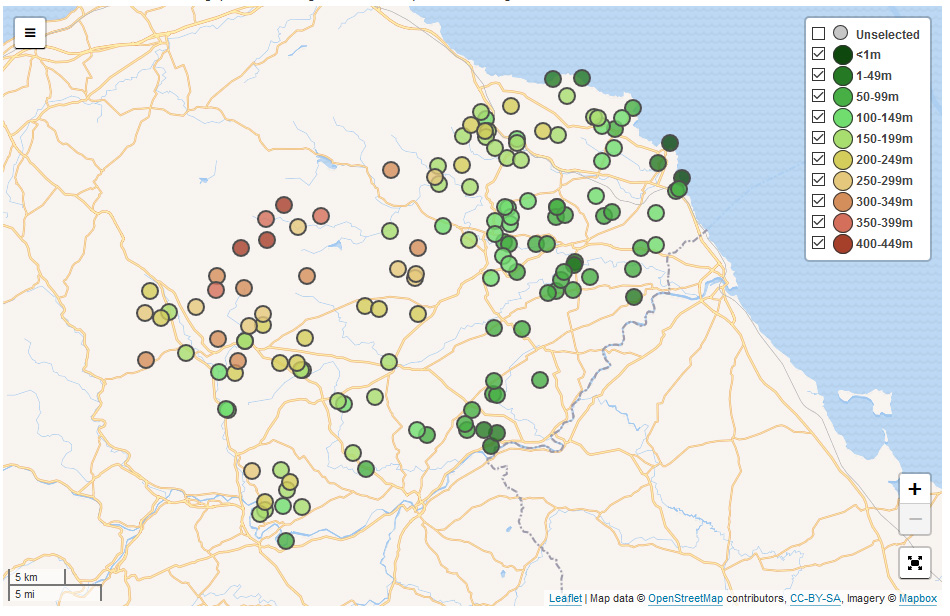 From the above screenshots you can see that I’ve also updated the map legend so that the coloured areas match the map markers, and I also added a scale to the map, with both metric and imperial units shown, which is what the team wanted.  There are still some further changes to be made, such as updating the base maps, and I’ll continue with this next week.

For Linguistic DNA and the Historical Thesaurus I met with Marc and Fraser on Wednesday morning to discuss updates.  We agreed that I would return to working on the sparklines in the next few weeks and I received a few further suggestions regarding the Historical Thesaurus timeline feature.  Marc has noticed that if your cursor was over the timeline then it wasn’t possible to scroll the page, even though a long timeline might go off the bottom of the screen.  If you moved your cursor to the sides of the timeline graphic scrolling worked normally, though.  It turned out that the SVG image was grabbing all of the pointer events so the HTML in the background never knew the scroll event was happening.  By setting the SVG to ‘pointer-events: none’ in the CSS the scroll events cascade down to the HTML and scrolling can take place.  However, this then stops the SVG being able to process click events, meaning the tooltips break.  Thankfully adding in ‘pointer-events: all’ to the bars, spots and OE label fixes this, apart from one oddity:  if your cursor is positioned over a bar, spot or the OE label and you try to scroll then nothing happens.  This is a relatively minor thing, though.  I also updated the timeline font so that it uses the font we use elsewhere on the site.

I also made the part of speech in the timeline heading lower-case to match the rest of the site, and I also realised that the timeline wasn’t using the newer versions of the abbreviations we’d decided upon (e.g. ‘adj.’ rather than ‘aj.’) so I updated this, and also added in the tooltip.  Finally, I addressed another bug whereby very short timelines were getting cut off.  I added extra height to the timeline when there are only a few rows, which stops this happening.

I had a Skype meeting with Mike Pidd had his team at DHI about the EEBO frequency data for Linguistic DNA on Wednesday afternoon.  We agreed that I would write a script that would output the frequency data for each Thematic Heading per decade as a series of CSV files that I would then send on to the team.  We also discussed the Sparkline interface and the HT’s API a bit more, and I gave some further explanation as to how the sparklines work.  After the meeting I started work on the export script, which does the following:

I started my script running on Thursday, and left my PC on over night to try and get the processing complete.  I left it running when I went home at 5pm, expecting to find several hundred CSV files had been outputted.  Instead, Windows had automatically installed an update and restarted my PC at 5:30, thus cancelling the script, which was seriously annoying.  It does not seem to be possible to stop Windows doing such things, as although there are plenty of Google results about how to stop Windows automatically restarting when installing updates Microsoft changes Windows so often that all the listed ways I’ve looked at no longer work.  It’s absolutely ridiculous as it means running batch processes that might take a few days is basically impossible to do with any reliability on a Windows machine.

Moving on to other tasks I undertook this week:  I sorted out payment for the annual Apple Developer subscription, which is necessary for our apps to continue to be listed on the App Store.  I also responded to a couple of app related queries from an external developer who is making an app for the University.  I also sorted out the retention period for user statistics for Google Analytics for all of the sites we host, after Marc asked me to look at this.