A publicly accessible, online scholarly edition of one of the most important archives of eighteenth-century medical "consultation letters", containing more than 20,000 digitised pages. Find out more
The Metaphor Map of English shows the metaphorical links which have been identified between different areas of meaning. These links can be from the Anglo-Saxon period right up to the present day so the map covers 1300 years of the English language. Find out more
As told by some of Scotland's best writers, and illustrated with thousands of images from the collections of the city's world-famous libraries, museums and universities. From football to fashions, Auchenshuggle to Yoker, you'll find it all here. Find out more
The Digital Catalogue documents, visually and textually, the first ten years of Andy Goldsworthy's ephemeral, outdoor practice. It replicates Goldsworthy's Slide Cabinet Index, and includes previously unpublished material from Goldsworthy's Sketchbook Diaries. Find out more
The University of Glasgow’s Historical Thesaurus of English is a unique resource charting the development of meaning in the huge and varied vocabulary of English. It consists of almost every recorded word in English from Anglo-Saxon times to the present day, all arranged into detailed hierarchies of meaning. Find out more
The Scots Syntax Atlas presents the results of over 100,000+ acceptability judgments from over 500 speakers on over 250 morphosyntactic phenomena. The Atlas also contains a text-to-sound aligned corpus of spoken data totalling 275 hours and over 3 million words. Find out more
Bess of Hardwick's Letters brings together, for the first time, the remarkable letters written to and from Bess of Hardwick (c.1521/2 or 1527-1608), one of Elizabethan England's most famous figures. Find out more
The Scottish Corpora project has created large electronic corpora of written and spoken texts for the languages of Scotland, featuring nearly 4.6 million words of text, with audio recordings to accompany many of the spoken texts. Find out more
The project provides a richly-illustrated Catalogue of all known architectural projects by Charles Rennie Mackintosh, including over 1200 drawings by Mackintosh and the practice, analytical and contextual essays, a timeline and glossary. Find out more
James McNeill Whistler (1834-1903) was a major figure in 19th century printmaking and created 490 etchings. Over 9500 impressions of these prints have been located and investigated during the project, which completes a series of catalogues raisonnés of Whistler's oeuvre. Find out more

I continued to work on the REELS website for a lot of this week, and attended a team meeting for the project on Wednesday afternoon.  In the run-up to the meeting I worked towards finalising the interface for the map.  Previously I’d just been using colour schemes and layouts I’d taken from previous projects I’d worked on, but I needed to develop an interface that was right for the current project.  I played around with some different colour schemes before settling on one that’s sort of green and blue, with red as a hover-over.  I also updated the layout of the textual list of records to make the buttons display a bit more nicely, and updated the layout of the record page to place the description text above the map.  Navigation links and buttons also now appear as buttons across the top of pages, whereas previously they were all over the place.  Here’s an example of the record page: 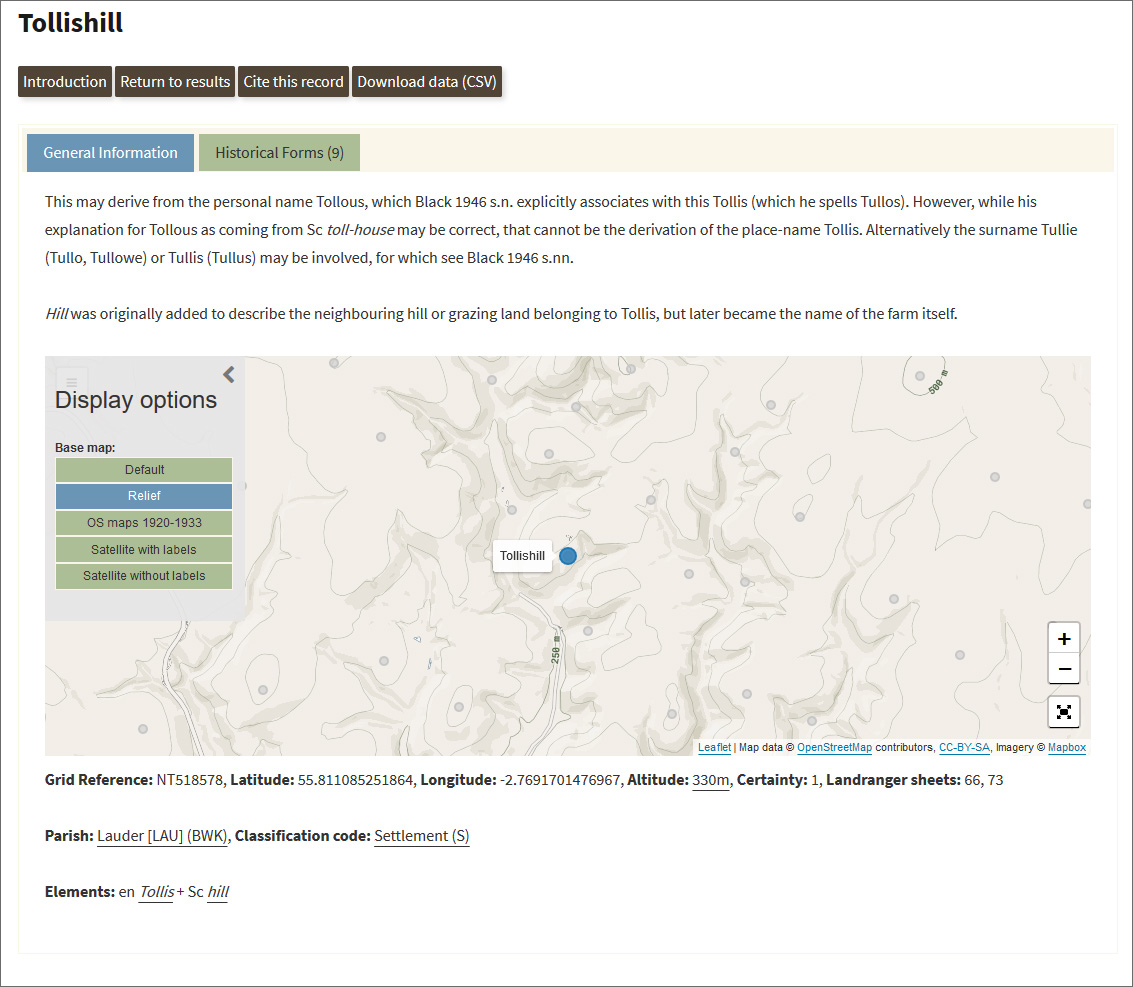 The team meeting was really useful, as Simon had some useful feedback on the CMS and we all went through the front-end and discussed some of the outstanding issues.  By the end of the meeting I had accumulated quite a number of items to add to my ‘to do’ list, and I worked my way through these during the rest of the week.  These included:

I also investigated some issues with the Export script that Daibhidh had reported.  It turned out that these were being caused by Excel.  The output file is a comma separated value file encoded in UTF-8.  I’d included instructions on how to import the file into Excel to allow UTF-8 characters to display properly, but for some reason this method was causing some of the description fields to be incorrectly split up.  If instead of importing the file following the instructions it was opened directly into Excel the fields get split up into their proper columns correctly, but you end up with a bunch of garbled UTF-8 characters.

After a bit of research I figured out a way for the CSV file to be directly opened in Excel with the UTF-8 characters intact (and with the columns not getting split up where they shouldn’t).  By setting my script to include ‘Byte Order Marking’ at the top of the file, Excel magically knows to render the UTF-8 characters properly.

In addition to the REELS project, I attended an IT Services meeting on Wednesday morning.  It was billed as a ‘Review of IT Support for Researchers’ meeting but in reality the focus of pretty much the whole meeting was on the proposal for the high performance compute cluster, with most of the discussions being about the sorts of hardware setup it should feature.  This is obviously very important for researchers dealing with petabytes and exabytes of data and there were heated debates about whether there were too many GPUs when CPUs would be more useful (and vice versa) but really this isn’t particularly important for anything I’m involved with.  The other sections of the agenda (training, staff support etc) were also entirely focussed on HPC and running intensive computing jobs, not on things like web servers and online resources.  I’m afraid there wasn’t really anything I could contribute to the discussions.

I did learn a few interesting things, though, namely: IT Services are going to start offering a training course in R, which might be useful.  Also, Machine Learning is very much considered the next big thing and is already being used quite heavily in other parts of the University.  Machine Learning works better with GPUs rather than CPUs and there are apparently some quite easy to use Machine Learning packages out there now.  Google has an online tool called Colaboratory (https://colab.research.google.com) for Machine Learning education and research, which might be useful to investigate.  Also, IT Services offer Unix tutorials here: http://nyx.cent.gla.ac.uk/unix/ and other help documentation about HPC, R and other software here: http://nyx.cent.gla.ac.uk/unix/ These don’t seem to be publicised anywhere, but might be useful.

I also worked on a number of other projects this week, including creating a timeline feature based on data about the Burns song ‘Afton Water’ that Brianna had sent me for the RNSN project.  I created this using the timeline.js library (https://timeline.knightlab.com/), which is a great library and really easy to use.  I also responded to a query about some maps of the Ramsay ARHC project, which is now underway.  Also, Jane and Eleanor got back to me with some feedback on my mock-up designs for the new Seeing Speech website.  They have decided on a version that is very similar in layout to the old site, and they had suggested several further tweaks.  I created a new mock-up with these tweaks in place, which they both seem happy with.  Once they have worked a bit more on the content of the site I will then be able to begin the full migration to the new design.