The resource includes historical research for all Berwickshire place-names on the Ordnance Survey 1:50,000 Landranger map, including more than 1,600 place-names and 7,000 historical forms presented via a series of interactive maps. Find out more
The University of Glasgow’s Historical Thesaurus of English is a unique resource charting the development of meaning in the huge and varied vocabulary of English. It consists of almost every recorded word in English from Anglo-Saxon times to the present day, all arranged into detailed hierarchies of meaning. Find out more
The online catalogue includes some 550 oil paintings and over 1700 works on paper dating from ca 1850 to 1903. The evolution of each painting from sketch to final oil is described and illustrated. Find out more
The Metaphor Map of English shows the metaphorical links which have been identified between different areas of meaning. These links can be from the Anglo-Saxon period right up to the present day so the map covers 1300 years of the English language. Find out more
Bess of Hardwick's Letters brings together, for the first time, the remarkable letters written to and from Bess of Hardwick (c.1521/2 or 1527-1608), one of Elizabethan England's most famous figures. Find out more
The Scottish Corpora project has created large electronic corpora of written and spoken texts for the languages of Scotland, featuring nearly 4.6 million words of text, with audio recordings to accompany many of the spoken texts. Find out more
A database of all known people of Scotland between 1093 and 1314 mentioned in over 8600 contemporary documents. It is also being extended to 1371 to include all those lands, peoples and relationships mentioned in royal charters between 1314 and 1371. Find out more
The project provides a richly-illustrated Catalogue of all known architectural projects by Charles Rennie Mackintosh, including over 1200 drawings by Mackintosh and the practice, analytical and contextual essays, a timeline and glossary. Find out more
The Digital Catalogue documents, visually and textually, the first ten years of Andy Goldsworthy's ephemeral, outdoor practice. It replicates Goldsworthy's Slide Cabinet Index, and includes previously unpublished material from Goldsworthy's Sketchbook Diaries. Find out more
A publicly accessible, online scholarly edition of one of the most important archives of eighteenth-century medical "consultation letters", containing more than 20,000 digitised pages. Find out more

I spent quite a bit of time this week on the Historical Thesaurus.  A few tweaks ahead of Kay Day has now turned into a complete website redevelopment, so things are likely to get a little hectic over the next couple of weeks.  Last week I implemented an initial version of a new HT tree-based browse mechanism but at the start of this week I still wasn’t sure how best to handle different parts of speech and subcategories.  Originally I had thought we’d have a separate tree for each part of speech, but I came to realise that this was not going to work as the non-noun hierarchy has more gaps than actual content.  There are also issues with subcategories as ones with the same number but different parts of speech have no direct connection.  Main categories with the same number but different parts of speech always refer to the same thing – e.g. 01.02aj is the adjective version of 01.02.n.  But subcategories just fill out the numbers, meaning 01.02|01.aj can be something entirely different to 01.02|01.n.  This means providing an option to jump from a subcategory in one part of speech to another wouldn’t make sense.

The second one has [+] and [-] instead of chevrons.  It has the catnum in grey before the heading.  The tree structure is the same as the first version (i.e. includes all noun categories and noun subcats).  When you open a category the different parts of speech now appear as tabs, with ‘noun’ open by default.  Hover over a tab to see the full part of speech and the heading for that part of speech.  The good thing about the tabs is the currently active PoS doesn’t disappear from the list, as happens with the other view.  When viewing a PoS that isn’t ‘noun’ and there are subcategories the full contents of these subcategories are visible underneath the maincat words.  Subcats are indented and coloured to reflect their level, as with the ‘live’ site’s subcats, but here all lexemes are also displayed.  As ‘noun’ subcats are handled differently and this could be confusing a line of text explains how to access these when viewing a non-noun category.

For the third version I removed all subcats from the tree and it only features noun maincats.  It is therefore considerably less extensive, and no doubt less intimidating.  In the category pane, the PoS selector is the same as the first version.  The full subcat contents as in v2 are displayed for every PoS including nouns.  This does make for some very long pages, but does at least mean all parts of speech are handled in the same way.

Marc, Fraser and I met to discuss the HT on Wednesday.  It was a very productive meeting and we formed a plan about how to proceed with the revamp of the site.  Marc showed us some new versions of the interface he has been working on too.  There is going to be a new colour scheme and new fonts will be used too.  Following on from the meeting I updated the navigation structure of the HT site, replaced all icons used in the site with Font Awesome icons, added in the facility to reload the ’random category’ that gets displayed on the homepage, moved the ‘quick search’ to the navigation bar of every page and made some other tweaks to the interface.

I spent more time towards the end of the week on the tree browser.  I’ve updated the ‘parts of speech’ section so that the current PoS is also included.  I’ve also updated the ordering to reflect the order in the printed HT and updated the abbreviations to match these too.  Tooltips now give text as found in the HT PDF.  The PoS beside the cat number is also now a tooltip.  I’ve updated the ‘random category’ to display the correct PoS abbreviation too.  I’ve also added in some default text that appears on the ‘browse’ page before you select a category.

A lot of my time was spent looking into how to handle loading the ‘browse’ page at a specific point in the hierarchy and ensuring that links to specific categories are possible via catIDs in the URL.  Now when you open a category the catid is appended to the page URL in the address bar.  This is a hash (#id=1) rather than a GET variable (?id=1) as updating hashes is much easier in JavaScript and works with older browsers.  This does mean old HT bookmarks and citations will point to the wrong place, but this isn’t a problem as I’ve updated the ‘category’ page so that it now takes an old style URL then redirects on to our new ‘browse’ page.  This brings us onto the next tricky issue:  Loading a category and the tree from a passed URL.  I am still in the middle of this as there are a couple of tricky things that need to be taken into consideration:

I have sorted out point 1 now.  If you pass a subcat ID to the page the maincat record is loaded and the page scrolls until the subcat is in view.  I will also highlight the subcat as well, but haven’t done this yet.  I’m still in the middle of addressing the second point.  I know where and how to add in the grabbing of the noun category, I just haven’t had the time to do it yet.  I also need to properly build up the tree structure and have the relevant parts open.  This is still to do as currently only the tree from the maincat downwards is loaded in.  It’s potentially going to be rather tricky to get the full tree represented and opened properly so I’ll be focussing on this next week.  Also, T7 categories are currently giving an error in the tree.  They all appear to have children and when you click on the [+] then an error occurs.  I’ll get this fixed next week too.  After that I’ll focus on integrating the search facilities with the tree view.  Here’s a screenshot of how the tree currently looks: 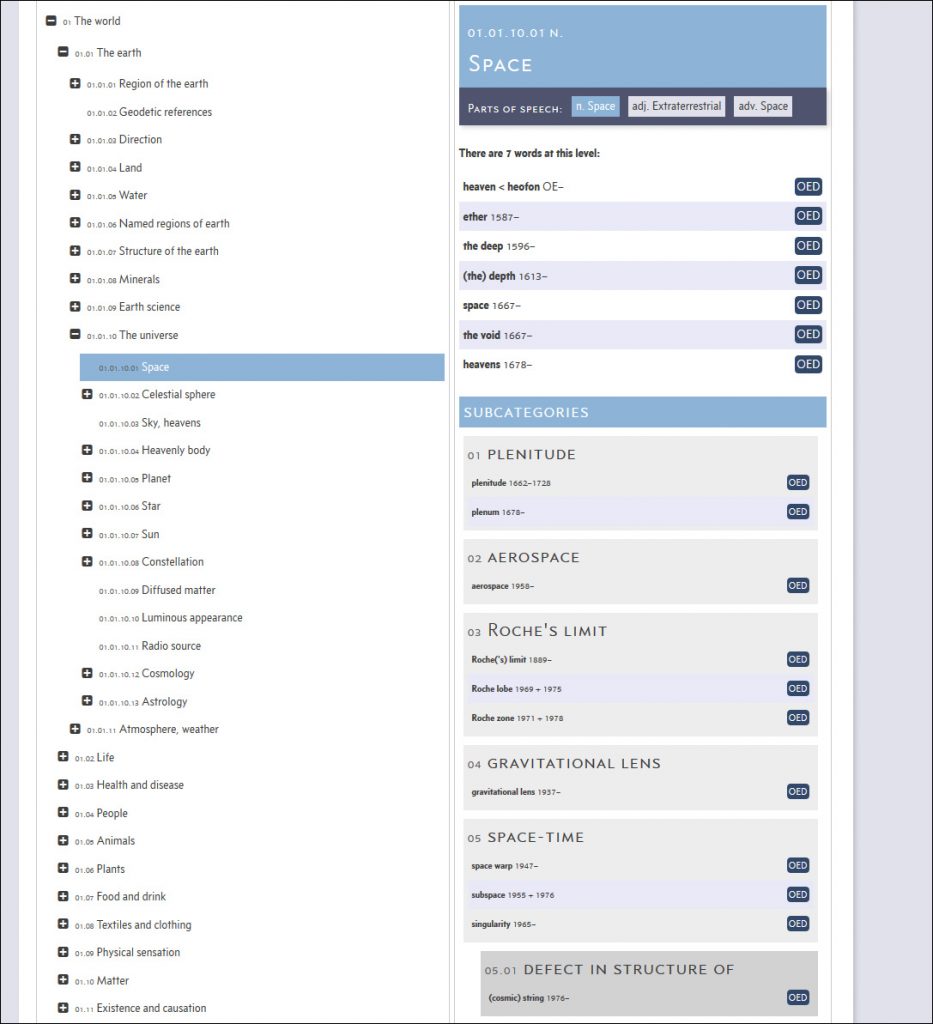 I was pretty busy with other projects this week as well.  I met with Thomas Clancy and Simon Taylor on Tuesday to discuss a new place-names project they are putting together.  I will hopefully be able to be involved in this in some capacity, despite it not being based in the School of Critical Studies.  I also helped Chris to migrate the SCOTS Corpus websites to a new server.  This caused some issues with the PostGreSQL database that took use several hours to get to the bottom of.  These were causing the search facilities to be completely broken, but thankfully I figured out what was causing this and by the end of the week the site was sitting on a new server.  I also had an AHRC review to undertake this week.

On Friday I met with Marc and the group of people who are working on a new version of the ARIES app.  I will be implementing their changes so it was good to speak to them and learn what they intend to do.  The timing of this is going to be pretty tight as they want to release a new version by the end of August, so we’ll just need to see how this goes.  I also made some updates to the ‘Burns and the Fiddle’ section of the Burns website.  It’s looking like this new section will now launch in July.

Finally, I spent several hours on The People’s Voice project, implementing the ‘browse’ functionality for the database of poems.  This includes a series of tabs for different ways of browsing the data.  E.g. you can browse the titles of poems by initial letter, you can browse a list of authors, years of publication etc.  Each list includes the items plus the number of poems that are associated with the item – so for example in the list of archives and libraries you can see that Aberdeen Central Library has 70 associated poems.  You can then click on an item and view a list of all of the matching poems.  I still need to create the page for actually viewing the poem record.  This is pretty much the last thing I need to implement for the public database and all being well I’ll get this finished next Friday.