The online catalogue includes some 550 oil paintings and over 1700 works on paper dating from ca 1850 to 1903. The evolution of each painting from sketch to final oil is described and illustrated. Find out more
A database of all known people of Scotland between 1093 and 1314 mentioned in over 8600 contemporary documents. It is also being extended to 1371 to include all those lands, peoples and relationships mentioned in royal charters between 1314 and 1371. Find out more
The University of Glasgow’s Historical Thesaurus of English is a unique resource charting the development of meaning in the huge and varied vocabulary of English. It consists of almost every recorded word in English from Anglo-Saxon times to the present day, all arranged into detailed hierarchies of meaning. Find out more
The project provides a richly-illustrated Catalogue of all known architectural projects by Charles Rennie Mackintosh, including over 1200 drawings by Mackintosh and the practice, analytical and contextual essays, a timeline and glossary. Find out more
The Scots Syntax Atlas presents the results of over 100,000+ acceptability judgments from over 500 speakers on over 250 morphosyntactic phenomena. The Atlas also contains a text-to-sound aligned corpus of spoken data totalling 275 hours and over 3 million words. Find out more
Bess of Hardwick's Letters brings together, for the first time, the remarkable letters written to and from Bess of Hardwick (c.1521/2 or 1527-1608), one of Elizabethan England's most famous figures. Find out more
The resource provides ultrasound tongue imaging (UTI) and lip video of speech, magnetic resonance imaging (MRI) video of speech, and 2D midsagittal head animations based on MRI and UTI data. Find out more
James McNeill Whistler (1834-1903) was a major figure in 19th century printmaking and created 490 etchings. Over 9500 impressions of these prints have been located and investigated during the project, which completes a series of catalogues raisonnés of Whistler's oeuvre. Find out more
The Digital Catalogue documents, visually and textually, the first ten years of Andy Goldsworthy's ephemeral, outdoor practice. It replicates Goldsworthy's Slide Cabinet Index, and includes previously unpublished material from Goldsworthy's Sketchbook Diaries. Find out more
The project explores Romantic-period accounts of journeys into Wales and Scotland with a focus on the writings of the Flintshire naturalist and antiquarian Thomas Pennant (1726-1798), whose published Tours of both countries did so much to awaken public interest in the ‘peripheries’ of Britain. Find out more

I wasn’t feeling very well at the start of the week, but instead of going home sick I managed to struggle through by focussing on some fairly unchallenging tasks, namely continuing to migrate the STARN materials to the University’s T4 system.  I’m still ploughing through the Walter Scott novels, but I made a bit of progress.  I also spent a little more time this week on AHRC duties.

I had a few meetings this week.  I met with the Heads of School Administration, Wendy Burt and Nikki Axford on Tuesday to discuss some potential changes to my job, and then had a meeting with Marc on Wednesday to discuss this further.  The outcome of these meetings is that actually there won’t be any changes after all, which is disappointing but at least after several months of the possibility hanging there it’s all decided now.

On Tuesday I also had a meeting with Bryony Randall to discuss her current AHRC project about editing modernist texts.  I have a few days of effort assigned to this project, to help create a digital edition of a short story by Virginia Woolf and to lead a session on transcribing texts at a workshop in April, so we met to discuss how all this will proceed.  We’ve agreed that I will create the digital edition, comprising facsimile images and multiple transcriptions with various features visible or hidden.  Users will be able to create their own edition by deciding which features to include or hide, thus making users the editors of their own edition.  Bryony is going to make various transcriptions in Word and I am then going to convert this into TEI text.  The short story is only 6 pages long so it’s not going to be too onerous a task and it will be good experience to use TEI and Oxygen for a real project.  I’ll get started on this next week.

I met with Fraser on Wednesday to discuss the OED updates for the Historical Thesaurus and also to talk about the Hansard texts again.  We returned to the visualisations I’d made for the frequency of Thematic headings in the two-year sample of Hansard that I was working with.  I should really try to find the time to return to this again as I had made some really good progress with the interface previously.  Also this week I arranged to meet with Catriona Macdonald about The People’s Voice project and published this week’s new song of the week on the Burns website (http://burnsc21.glasgow.ac.uk/robert-bruces-address-to-his-army-at-bannockburn/).

I spent the rest of the week working on the SCOSYA project.  Gary emailed me last week to say that he’d encountered some problems with the Atlas interface since I implemented my updated ‘or’ search a couple of weeks ago so I spent a few hours trying to get to the bottom of these issues.  The main issue was that some ‘or’ searches were displaying no points on the map, even though data was available and could be downloaded via the CSV download facility.  The problem was caused by a mistake in how I was pulling in the rating comments.  I updated how I was handling these but had forgot to change a variable name in one part of the code, which was causing a JavaScript error only when certain combinations of factors occurred.  It should be sorted now, I hope.

Gary had also stated that some ‘or’ searches were not showing multiple icons when different attributes were selected.   However, after some investigation I think this may just be because without supplying limits an ‘or’ search for two attributes will often result in the attributes both being present at every location, therefore all markers will be the same.  E.g. a search for ‘D3 or A9’.  There are definitely some combinations of attributes that do give multiple markers, e.g. ‘Q6 or D32’.  And if you supply limits you generally get lots of different icons, e.g. ‘D3, young, 4-5 or A9, old, 4-5’.  Gary is going to check this again for any specific examples that don’t seem right.

After that I began to think about the new Atlas search options that Gary would like me to implement, such as being able to search for entire groups of attributes (e.g. an entire parent category) rather than individual ones.  At the moment I’m not entirely sure how this should work, specifically how the selected attributes should be joined.  For example, if I select the parent ‘AFTER’ with limits ‘old’ and ‘rating 4-5’ would the atlas only then show me those locations where all ‘AFTER’ attributes (D3 and D4) are present with these limits?  This would basically be the same as an individual attribute search for D3 and D4 joined by ‘and’.  Or would it be an ‘or’ search?  I’ve asked Gary for clarification but I haven’t heard back from him yet.

I also made a couple of minor cosmetic changes to the atlas.  Attributes within parent categories are now listed alphabetically by their code rather than their name, and selected buttons are now yellow to make it clearer which are selected and to differentiate from the ‘hover over’ purple colour.  I then further reworked the ‘Atlas display options’ so that the different search options are now housed in an ‘accordion’.  This hopefully helps to declutter the section a little.  As well as accordion sections for ‘Questionnaire Locations’ and ‘Attribute Search’ I have added in new sections for ‘Advanced Attribute Search’ and ‘My Map Data’.  These don’t have anything useful in them yet but eventually ‘Advanced Attribute Search’ will feature the more expanded options that are available via the ‘consistency data’ view – i.e. options to select groups of attributes and alternative ways to select ratings.  ‘My Map Data’ will be where users can upload their own CSV files and possibly access previously uploaded datasets.  See the following screenshot for an idea of how the new accordion works. 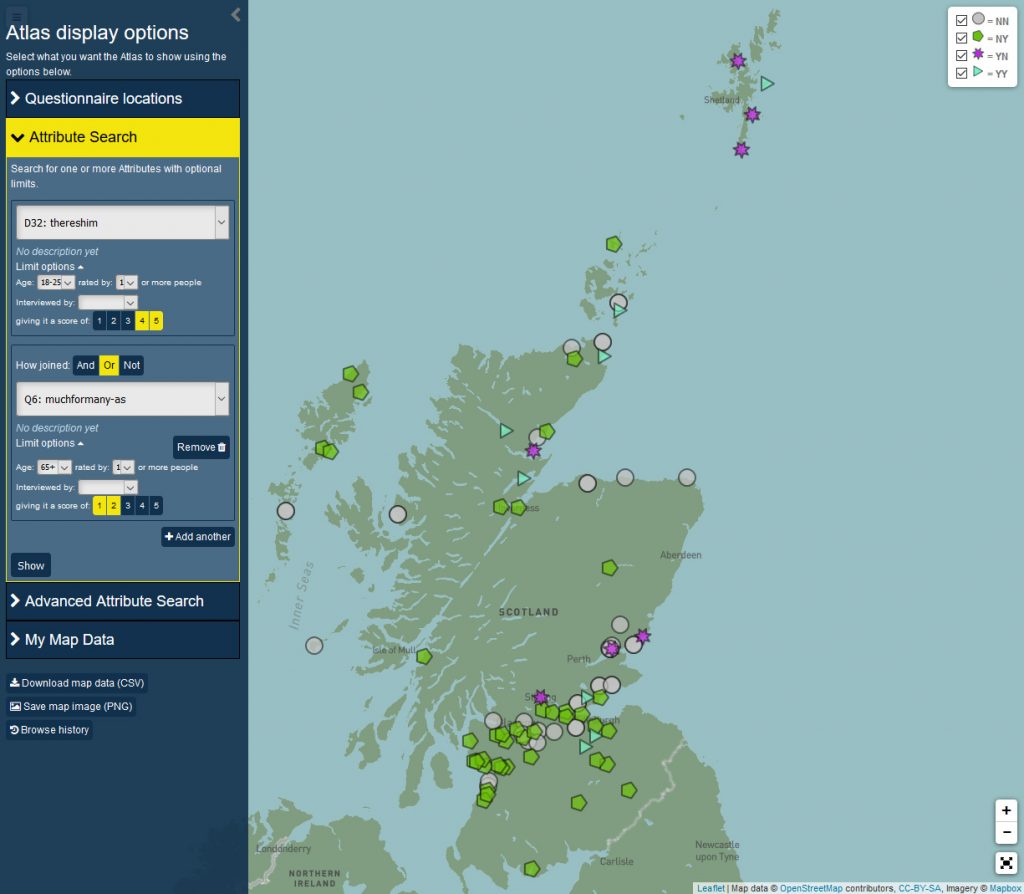 I also started to think about how to implement the upload and display of a user’s CSV files and realised that a lot of the information about how points are displayed on the map is not included in the CSV file.  For example, there’s no indication of the joins between attributes or the limiting factors that were used to generate the data contained in the file.  This would mean when uploading the data the system wouldn’t be able to tell whether the points should be displayed as an ‘and’ map or an ‘or’ map.  I have therefore updated the ‘download map data’ facility to add in the URL used to generate the file in the first row.  This actually serves two useful purposes.  Firstly it means on re-uploading the file the system can tell which limits and Boolean joins were used and display an appropriate map and secondly it means there is a record in the CSV file of where the data came from and what it contains.  A user would be able to copy the URL into their browser to re-download the same dataset if (for example) they messed up their file.  I’ll continue to think about the implementation of the CSV upload facility next week.