The project explores Romantic-period accounts of journeys into Wales and Scotland with a focus on the writings of the Flintshire naturalist and antiquarian Thomas Pennant (1726-1798), whose published Tours of both countries did so much to awaken public interest in the ‘peripheries’ of Britain. Find out more
The Digital Catalogue documents, visually and textually, the first ten years of Andy Goldsworthy's ephemeral, outdoor practice. It replicates Goldsworthy's Slide Cabinet Index, and includes previously unpublished material from Goldsworthy's Sketchbook Diaries. Find out more
James McNeill Whistler (1834-1903) was a major figure in 19th century printmaking and created 490 etchings. Over 9500 impressions of these prints have been located and investigated during the project, which completes a series of catalogues raisonnés of Whistler's oeuvre. Find out more
The Scots Syntax Atlas presents the results of over 100,000+ acceptability judgments from over 500 speakers on over 250 morphosyntactic phenomena. The Atlas also contains a text-to-sound aligned corpus of spoken data totalling 275 hours and over 3 million words. Find out more
The project provides a richly-illustrated Catalogue of all known architectural projects by Charles Rennie Mackintosh, including over 1200 drawings by Mackintosh and the practice, analytical and contextual essays, a timeline and glossary. Find out more
The University of Glasgow’s Historical Thesaurus of English is a unique resource charting the development of meaning in the huge and varied vocabulary of English. It consists of almost every recorded word in English from Anglo-Saxon times to the present day, all arranged into detailed hierarchies of meaning. Find out more
Bess of Hardwick's Letters brings together, for the first time, the remarkable letters written to and from Bess of Hardwick (c.1521/2 or 1527-1608), one of Elizabethan England's most famous figures. Find out more
As told by some of Scotland's best writers, and illustrated with thousands of images from the collections of the city's world-famous libraries, museums and universities. From football to fashions, Auchenshuggle to Yoker, you'll find it all here. Find out more
The resource provides ultrasound tongue imaging (UTI) and lip video of speech, magnetic resonance imaging (MRI) video of speech, and 2D midsagittal head animations based on MRI and UTI data. Find out more
The Metaphor Map of English shows the metaphorical links which have been identified between different areas of meaning. These links can be from the Anglo-Saxon period right up to the present day so the map covers 1300 years of the English language. Find out more

I continued working on the SCOSYA project this week, further refining the ‘or’ search that I spent much of last week working on.  Gary had noted that the ‘or’ search wasn’t working as intended (i.e. different icons representing different combinations of attributes) when the same attribute was selected but with different limit options – e.g. Attribute D3 rated 1-3 by young speakers OR Attribute D3 rated 1-3 by old speakers.  Unfortunately, this is because all of my code was written around each attribute in an ‘or’ search being different – if two selected attributes are the same the code for splitting things up and assigning different icons simply doesn’t trigger.  To get the display to work for the same attribute required some fairly major reworking of the code, which took rather a long time to get working.  By the end of the week I’d got something that was sort of working in place.  Now the ‘or’ search checks every selected ‘limit’ option including the attribute selection to see whether the selected attribute is the same or not.  This means the ‘or’ search also works for selecting different scores, ‘interviewed by’ options and other limit options in addition to the ‘age’ selection.  However, I’m noticing some errors in the choice of icons when more than two attributes are chosen.  Specifically, it would appear that different attribute combinations for locations are being assigned the same icon, which is quite clearly a bug, so this is going to need some further work next week I’m afraid.  Below is a screenshot of an ‘or’ search for the same attribute with different combinations of limit options, so you can see that (for two selected items at least) the ‘or’ search is now working better than last week. 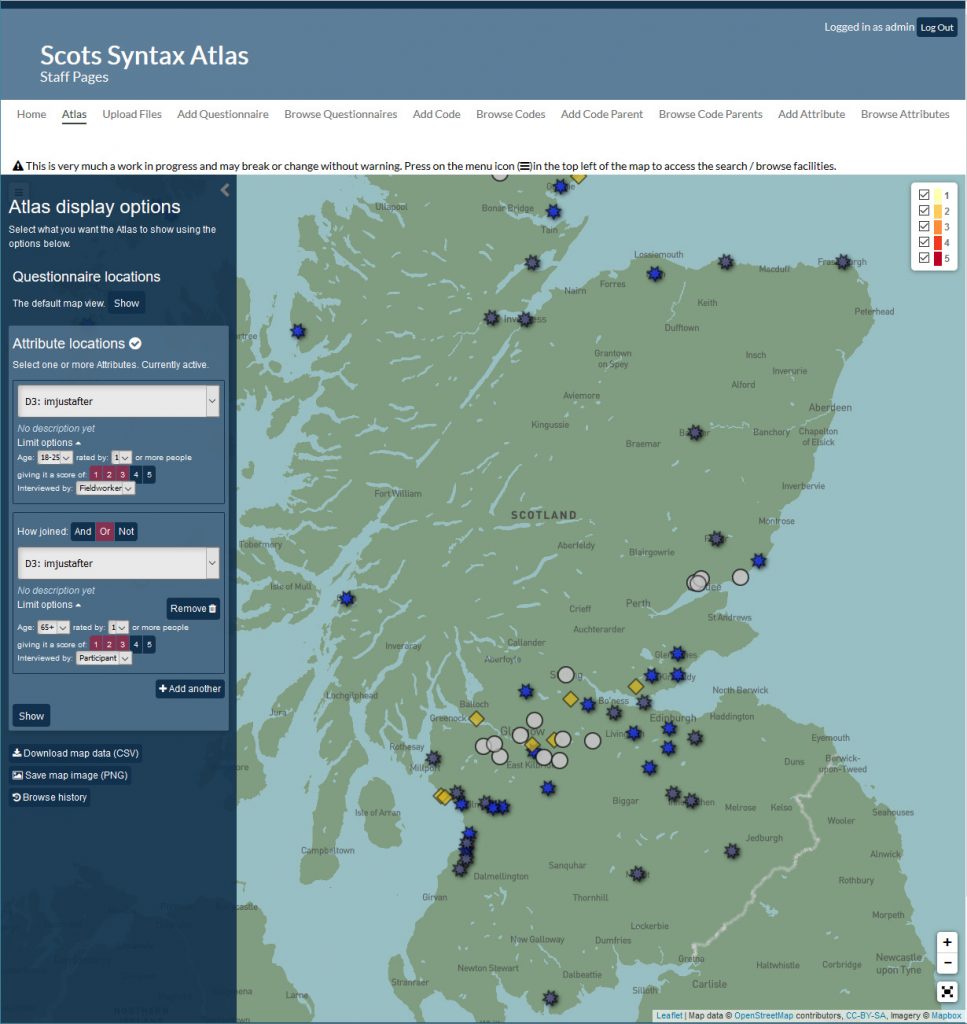 I continued with more AHRC review work for a day or so this week and I also spent about a day reworking an old resource that was in desperate need of attention.  The Thomas Crawford’s Diary section of Corpus of Modern Scottish Writing (http://www.scottishcorpus.ac.uk/thomascrawford/) is a WordPress powered site that was set up a couple of years before I started in this post.  The WordPress instance hasn’t been updated since the site launched in 2010 and is very out of date and almost certainly a security risk.  Unfortunately, the software is so old that I can’t even upgrade it using the WordPress tools – I tried doing so before and the upgrade failed and the entire site broke.  The site doesn’t really need to be a WordPress site, at least not now it’s launched and the day by day postings are well and truly over.  Instead I’ve created a version that uses nothing more than a small amount of PHP scripting and stores all of the diary entries in a PHP array.  I think the version I’ve created works a lot better than the existing version (navigating between diary entries is easier and the order they’re listed in makes more sense) and hopefully I’ll be able to replace the existing version with my new version soon.  I’ve contacted Wendy to let her approve things before I take down the old site.  Hopefully the switchover will be able to take place in the next week or so and this ancient WordPress instance can be deleted.

I had two meetings with members of staff this week.  The first was with Johanna Green, who now works in HATII but previously worked for the School of Critical Studies.  Whilst she was still in SCS we submitted a Chancellor’s Fund proposal to develop a ‘web app’ based around an exhibition in Special Collections, and this was granted funding.  We are now starting to think about developing the app and we met to discuss the options.  Helpfully, Johanna had produced a series of Powerpoint based mockups of how she would like the app to look and function.  We went through these slides and we have a pretty good idea about how development should proceed.  I’ve requested a subdomain for the site and once we have the space available, and Johanna has got back to me with some images and other content, I’ll start to develop an initial version of the app.  Note that at this stage we are merely going to create a ‘web app’ – it will use purely client-side scripting and will be optimised for touchscreens but it won’t be ‘wrapped’ as an iOS or Android app.  Instead it will be accessed via a web browser.  However, I will ensure the code can be ‘wrapped’ at a later date if needs be.

My second meeting was with Hannah Tweed, who is in the process of submitting a proposal for funding for a project.  I can’t really go into details about this here, but we met and discussed the data management aspects of her project and after the meeting I wrote a few paragraphs for her data management plan.

I also launched the second of our weekly Burns songs this week (see http://burnsc21.glasgow.ac.uk/contented-wi-little-c/) and I spent the remainder of the week continuing to work through the OED data import for the Historical Thesaurus with Fraser.  I created a bunch of new scripts to process potential category matches that Fraser had identified.  For example, where the HT has ‘something/something else’ and the OED has ‘something (something else)’ these categories aren’t being flagged as the same so a little script to switch the formatting and then compare the category names helped to tick off a bunch of categories.  At the start of the week we had 38,676 categories across the two datasets that were not marked as ‘checked’ and be the end of the week we had got this down to 23,595, which is pretty good going.