The online catalogue includes some 550 oil paintings and over 1700 works on paper dating from ca 1850 to 1903. The evolution of each painting from sketch to final oil is described and illustrated. Find out more
The project explores Romantic-period accounts of journeys into Wales and Scotland with a focus on the writings of the Flintshire naturalist and antiquarian Thomas Pennant (1726-1798), whose published Tours of both countries did so much to awaken public interest in the ‘peripheries’ of Britain. Find out more
The resource includes historical research for all Berwickshire place-names on the Ordnance Survey 1:50,000 Landranger map, including more than 1,600 place-names and 7,000 historical forms presented via a series of interactive maps. Find out more
The Metaphor Map of English shows the metaphorical links which have been identified between different areas of meaning. These links can be from the Anglo-Saxon period right up to the present day so the map covers 1300 years of the English language. Find out more
The University of Glasgow’s Historical Thesaurus of English is a unique resource charting the development of meaning in the huge and varied vocabulary of English. It consists of almost every recorded word in English from Anglo-Saxon times to the present day, all arranged into detailed hierarchies of meaning. Find out more
The Digital Catalogue documents, visually and textually, the first ten years of Andy Goldsworthy's ephemeral, outdoor practice. It replicates Goldsworthy's Slide Cabinet Index, and includes previously unpublished material from Goldsworthy's Sketchbook Diaries. Find out more
The project provides a richly-illustrated Catalogue of all known architectural projects by Charles Rennie Mackintosh, including over 1200 drawings by Mackintosh and the practice, analytical and contextual essays, a timeline and glossary. Find out more
James McNeill Whistler (1834-1903) was a major figure in 19th century printmaking and created 490 etchings. Over 9500 impressions of these prints have been located and investigated during the project, which completes a series of catalogues raisonnés of Whistler's oeuvre. Find out more
As told by some of Scotland's best writers, and illustrated with thousands of images from the collections of the city's world-famous libraries, museums and universities. From football to fashions, Auchenshuggle to Yoker, you'll find it all here. Find out more
A database of all known people of Scotland between 1093 and 1314 mentioned in over 8600 contemporary documents. It is also being extended to 1371 to include all those lands, peoples and relationships mentioned in royal charters between 1314 and 1371. Find out more

I continued to work on the SCOSYA project this week, picking out a couple of big items from my ‘to do’ list and working through them.  The first was adding in facilities to the Atlas attribute search to display only those ratings made in questionnaires where the interviewer was a fieldworker or a participant.  I’ve also added this option to the ‘consistency’ page as well.  I used a drop-down list instead of the checkboxes that Gary initially suggested for this.  This is because if there is a ‘participant’ and a ‘fieldworker’ checkbox it would be confusing as to what happens when both are deselected – ‘neither’ is not a valid option but it would appear to be one.  In the atlas limit options the ‘interviewed by’ limit is available for each selected attribute.  Implementing this meant I had to update the API to incorporate the new search options.  There are now 7 possible arguments that can be passed in an ‘attribute’ search, including attribute IDs, Boolean join types, age limits, number of people, rating levels and whether spurious data is included or not.  I updated the API documentation to take this into consideration too.

The second item I looked at was to update the Atlas display when multiple attributes are joined by ‘or’ in order to display a different marker shape / colour to represent each possible combination.  Working out an algorithm that can generate every single ‘present / absent’ permutation for any number of selected attributes proved to be rather difficult and I spent rather a long time attempting to get something working.

Given the number of variables I wanted to get back all possible permutations of them being true or false.  For two or three variables this is really simple to just work out manually, but figuring out an algorithm that can do it automatically really stumped me.  So, say you have two variables A and B that can either be true or false there would be four possible outcomes:

It feels like it should be simple to write a script that can output that but I just couldn’t seem to get there and for once I was struggling to find anything on Stackoverflow that helped either.  I found some information about calculating different permutations of an array, such as here: http://docstore.mik.ua/orelly/webprog/pcook/ch04_26.htm and here: http://stackoverflow.com/questions/18935813/efficiently-calculating-unique-permutations-in-a-set but this isn’t quite the same issue as they are about switching the order of the elements rather than keeping the order the same but stating whether the elements are present or absent.  I.e. the output of these scripts for an array containing A and B would be:

Eventually I asked my fellow College of Arts developers if they had any suggestions and thankfully Graeme Cannon managed to employ superior Googling skills and found a solution on Stackoverflow: http://stackoverflow.com/questions/39734887/generating-all-possible-true-false-combinations.  This did exactly what I was looking for, with the added bonus of the solution being in JavaScript, which is exactly what I needed.  Once I had this I could get to work adding it into my Atlas search options code.

When the script places the markers on the map it checks which attributes are present at that location, matches it to one of the above and displays the appropriately shaped and coloured marker.  This means you can tell at a glance where different combinations of attributes are located.  Note that this doesn’t take into consideration the rating level – i.e. you can’t tell from looking at the map where high or low scores are.  Here’s a screenshot of a new ‘or’ search in action: 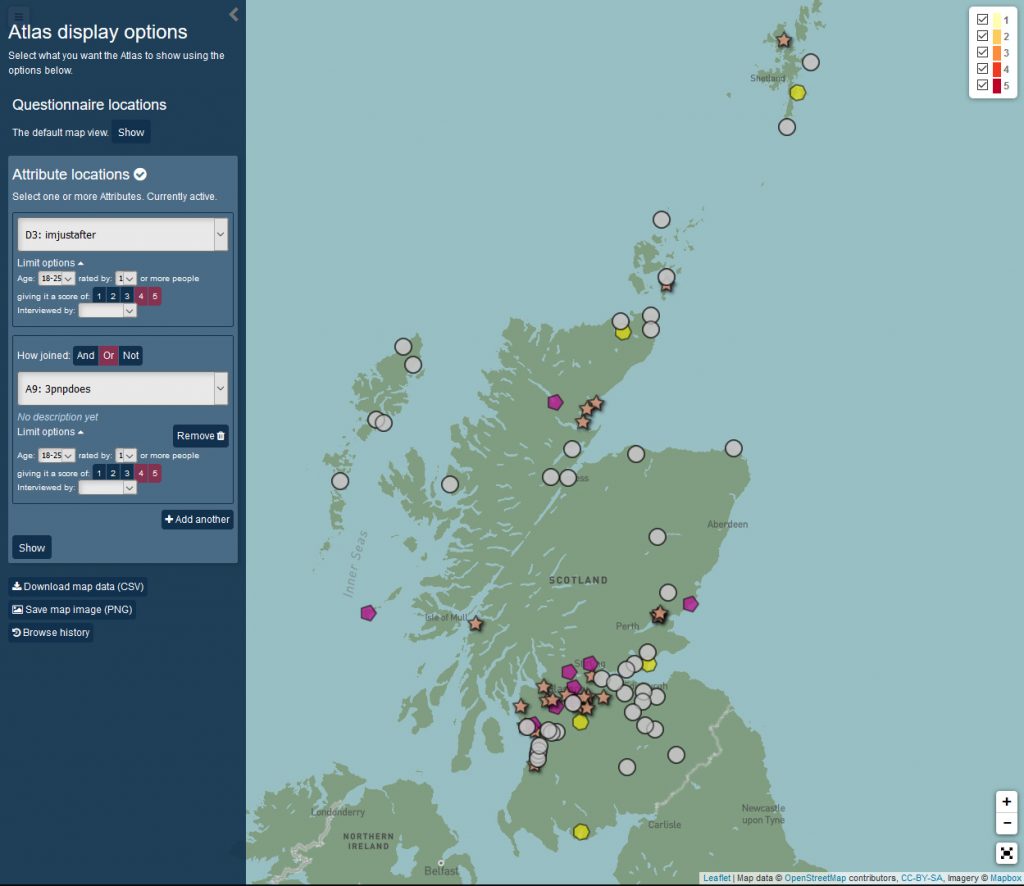 As the colours and shapes are randomly assigned whenever you perform a search if you don’t like the ones currently displayed you can just press the ‘show’ button again and different ones will load in.  Note also that this search works best when you supply some limit options.  Without them an ‘or’ search tends to just bring back everywhere having both for a lot of attributes.

I’ve still not fully completed work on this as I still need to update the map legend.  When I’ve done so the different colours and shapes and what they represent will be displayed in the legend and you’ll be able to show / hide one or more marker types using it (it might take some time to implement this, though).  I also need to look into an issue with different colours / shapes not appearing when the same attribute with different limits is selected multiple times joined by ‘OR’.

Other than SCOSYA work I spent some time on AHRC review duties and also gave some feedback to Graeme about an AHRC Technical Plan he’s working on.  I also responded to a researcher who was looking into ways of extracting text from eBook files, had a chat with Carole about some REELS related issues and responded to a query from Marc about new OED works in the Historical Thesaurus.  I also had an email conversation with Hannah Tweed about a proposal she’s putting together (we’re going to meet to discuss it next week) and looked through some materials Johanna Green sent me relating to an exhibition website the we’re going to work on together (this was all arranged before she moved from English Language to HATII).  I’ll be meeting with her next week too.  I also updated all of my WordPress sites to version 4.7.2 and created a new ‘Song of the Week’ feature for the Burns website.  For the next 10 weeks we’re going to be publishing a new song every Wednesday.  You can find more information here: http://burnsc21.glasgow.ac.uk/