A publicly accessible, online scholarly edition of one of the most important archives of eighteenth-century medical "consultation letters", containing more than 20,000 digitised pages. Find out more
The project explores Romantic-period accounts of journeys into Wales and Scotland with a focus on the writings of the Flintshire naturalist and antiquarian Thomas Pennant (1726-1798), whose published Tours of both countries did so much to awaken public interest in the ‘peripheries’ of Britain. Find out more
The Scottish Corpora project has created large electronic corpora of written and spoken texts for the languages of Scotland, featuring nearly 4.6 million words of text, with audio recordings to accompany many of the spoken texts. Find out more
The resource includes historical research for all Berwickshire place-names on the Ordnance Survey 1:50,000 Landranger map, including more than 1,600 place-names and 7,000 historical forms presented via a series of interactive maps. Find out more
The online catalogue includes some 550 oil paintings and over 1700 works on paper dating from ca 1850 to 1903. The evolution of each painting from sketch to final oil is described and illustrated. Find out more
As told by some of Scotland's best writers, and illustrated with thousands of images from the collections of the city's world-famous libraries, museums and universities. From football to fashions, Auchenshuggle to Yoker, you'll find it all here. Find out more
A database of all known people of Scotland between 1093 and 1314 mentioned in over 8600 contemporary documents. It is also being extended to 1371 to include all those lands, peoples and relationships mentioned in royal charters between 1314 and 1371. Find out more
The project provides a richly-illustrated Catalogue of all known architectural projects by Charles Rennie Mackintosh, including over 1200 drawings by Mackintosh and the practice, analytical and contextual essays, a timeline and glossary. Find out more
The resource provides ultrasound tongue imaging (UTI) and lip video of speech, magnetic resonance imaging (MRI) video of speech, and 2D midsagittal head animations based on MRI and UTI data. Find out more
The Metaphor Map of English shows the metaphorical links which have been identified between different areas of meaning. These links can be from the Anglo-Saxon period right up to the present day so the map covers 1300 years of the English language. Find out more

I worked on rather a lot of different projects this week.  I made some updates to the WordPress site I set up last week for Carolyn Jess-Cooke’s project, such as fixing an issue with the domain’s email forwarding.  I replaced the website design of The People’s Voice project website with the new one I was working on last week, and this is now live: http://thepeoplesvoice.glasgow.ac.uk/.  I think it looks a lot more visually appealing that the previous design, and I also added in a twitter feed to the right-hand column.  I also had a phone conversation with Maria Dick about her research proposal and we have now agreed on the amount of technical effort she should budget for.

I received some further feedback about the Metre app this week from a colleague of Jean Anderson’s who very helpfully took the time to go through the resource.  As a result of this feedback I made the following changes to the app:

Jean also tried to find some introductory text about the app but was unable to do so.  She’s asked if Marc can supply some, but I wold imagine he’s probably too busy to do so.  I’ll have to chase this up or maybe write some text myself as it would be good to be able to get the app completed and published soon.

Also this week I had a phone conversation with Sarah Jones of the Digital Curation Centre about some help and documentation I’ve given her about AHRC Technical Plans for a workshop she’s running.  I also helped out with two other non-SCS issues that cropped up.  Firstly, the domain for TheGlasgowStory (http://theglasgowstory.com/), which was one of the first websites I worked on had expired and the website had therefore disappeared.  As it’s been more than 10 years since the project ended no-one was keeping track of the domain subscription, but thankfully after some chasing about we’ve managed to get the domain ownership managed by IT Services and the renewal fee has now been paid.  Secondly, IT Services were wanting to delete a database that belonged to Archive Services (who I used to work for) and I had to check on the status of this.

I also spent a little bit of time this week creating a few mock-up logos / banners for the Survey of Scottish Place-Names, which I’m probably going to be involved with in some capacity and I spoke to Carole about the redevelopment of the Thesaurus of Old English Teaching Package.

Also this week I finally got round to completing training in the University Web Site’s content management system, T4.  After completing training I was given access to the STELLA pages within T4 and I’ve started to rework these.  I went through the outdated list of links on the old STELLA site and have checked each one, updating URLS or removing links entirely where necessary.  I’ve added in a few new ones too (e.g. to the BYU Corpus in the ‘Corpora’ section).  This updated content now appears on the ‘English & Scots Links’ page in the University website (http://www.gla.ac.uk/schools/critical/aboutus/resources/stella/englishscotslinks/) .

I also moved ‘Staff’ from its own page into a section on the STELLA T4 page to reduce left-hand navigation menu clutter.  For the same reason I’ve removed the left-hand links to SCOTS, STARN, The Glasgow Review and the Bibliography of Scottish Literature, as these are all linked to elsewhere.   I then renamed the ‘Teaching Packages’ page ‘Projects’ and have updated the content to provide direct links to the redeveloped resources first of all, and then links to all other ‘legacy’ resources, thus removing the need for the separate ‘STELLA digital resources’ page.  See here: http://www.gla.ac.uk/schools/critical/aboutus/resources/stella/projects/.  I updated the links to STELLA from my redeveloped resources to they go to this page now too.  With all of this done I decided to migrate the old ‘The Glasgow Review’ collection of papers to T4.  This was a long and tedious process, but it was satisfying to get it done.  The resource can now be found here: http://www.gla.ac.uk/schools/critical/aboutus/resources/stella/projects/glasgowreview/

In addition to the above I also worked on the SCOSYA project, looking into alternative map marker possibilities, specifically how we can show information about multiple attributes through markers on the map.  At our team meeting last week I mentioned the possibility of colour coding the selected attributes and representing them on the map using pie charts rather than circles for each map point and this week I found a library that will allow us to do such a thing, and also another form of marker called a ‘coxcomb chart’.  I created a test version with both forms, that you can see below: 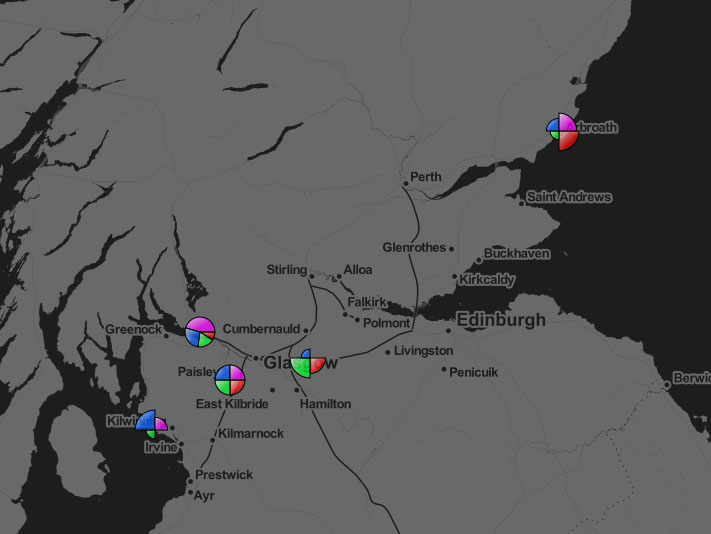 Note that the map is dark because that’s how the library’s default base map looks.  Our map wouldn’t look like this.  The library is pretty extensive and has other marker types available too, as you can see from this example page: http://humangeo.github.io/leaflet-dvf/examples/html/markers.html.

So in the above example, there are four attributes selected, and these are displayed for four locations.  The coxcomb chart splits the circle into the number of attributes and then the depth of each segment reflects the average score for each attribute.  E.g. looking at ‘Arbroath’ you can see at a glance that the ‘red’ attribute has a much higher average score than the ‘green’ attribute, while the marker for ‘Airdrie’ (to the east of Glasgow) has an empty segment where ‘pink’ should be, indicating that this attribute is not present at this location.

The two pie chart examples (Barrhead and Dumbarton) are each handled differently.  For Barrhead the average score of each attribute is not taken into consideration at all.  The ‘pie’ simply shows which attributes are present.  All four are present so the ‘pie’ is split into quarters.  If one attribute wasn’t found at this location then it would be omitted and the ‘pie’ would be split into thirds.  For Dumbarton average scores are taken into consideration, which changes the size of each segment.  You can see that the ‘pink’ attribute has a higher average than the ‘red’ one.  However, I think this layout is rather confusing as at a glance it seems to suggest that there are more of the ‘pink’ attribute, rather than the average being higher.  It’s probably best not to go with this one.

Both the pies and coxcombs are a fixed size no matter what the zoom level, so when you zoom far out they stay big rather than getting too small to make out.  On one hand this is good as it addresses a concern Gary raised about not being able to make out the circles when zoomed out.  However, when zoomed out the map is potentially going to get very cluttered, which will introduce new problems.  Towards the end of the week I heard back from Gary and Jennifer, and they wanted to meet with me to discuss the possibilities before I proceeded any further with this.  We have an all-day team meeting planned for next Friday, which seems like a good opportunity to discuss this.