The project explores Romantic-period accounts of journeys into Wales and Scotland with a focus on the writings of the Flintshire naturalist and antiquarian Thomas Pennant (1726-1798), whose published Tours of both countries did so much to awaken public interest in the ‘peripheries’ of Britain. Find out more
The University of Glasgow’s Historical Thesaurus of English is a unique resource charting the development of meaning in the huge and varied vocabulary of English. It consists of almost every recorded word in English from Anglo-Saxon times to the present day, all arranged into detailed hierarchies of meaning. Find out more
The online catalogue includes some 550 oil paintings and over 1700 works on paper dating from ca 1850 to 1903. The evolution of each painting from sketch to final oil is described and illustrated. Find out more
Bess of Hardwick's Letters brings together, for the first time, the remarkable letters written to and from Bess of Hardwick (c.1521/2 or 1527-1608), one of Elizabethan England's most famous figures. Find out more
James McNeill Whistler (1834-1903) was a major figure in 19th century printmaking and created 490 etchings. Over 9500 impressions of these prints have been located and investigated during the project, which completes a series of catalogues raisonnés of Whistler's oeuvre. Find out more
A database of all known people of Scotland between 1093 and 1314 mentioned in over 8600 contemporary documents. It is also being extended to 1371 to include all those lands, peoples and relationships mentioned in royal charters between 1314 and 1371. Find out more
The Scots Syntax Atlas presents the results of over 100,000+ acceptability judgments from over 500 speakers on over 250 morphosyntactic phenomena. The Atlas also contains a text-to-sound aligned corpus of spoken data totalling 275 hours and over 3 million words. Find out more
The project provides a richly-illustrated Catalogue of all known architectural projects by Charles Rennie Mackintosh, including over 1200 drawings by Mackintosh and the practice, analytical and contextual essays, a timeline and glossary. Find out more
The Metaphor Map of English shows the metaphorical links which have been identified between different areas of meaning. These links can be from the Anglo-Saxon period right up to the present day so the map covers 1300 years of the English language. Find out more
As told by some of Scotland's best writers, and illustrated with thousands of images from the collections of the city's world-famous libraries, museums and universities. From football to fashions, Auchenshuggle to Yoker, you'll find it all here. Find out more

I spent a fair amount of time this week working on the SCOSYA project again.  We had a project meeting planned for Wednesday but unfortunately Gary had to postpone this to next week, but I decided to tackle some of the outstanding items on my ‘to do’ list of the project nonetheless.  The first thing I implemented was a ‘history’ feature for the Atlas. This was based on the ‘history’ feature I previously created for the Mapping Metaphor project, allowing you to return to a previous version of the visualisation interface that you had been looking at.  For SCOSYA, the Atlas now ‘remembers’ every search you do during a session and lists these on a ‘history’ page, allowing you to return to something you’ve previously looked at.  A history entry is logged whenever you press one of the ‘show’ buttons to change the atlas display criteria.  Changes in zoom level and map position don’t currently get logged as a new history entry.  I can add these, but I thought it would result in too much information being logged.  However, it is possible to save a snapshot of a particular position and zoom level by pressing the ‘save’ button again.  The history feature can be accessed by pressing on a ‘Browse History’ button that I have added to the bottom of the ‘Atlas display options’ panel.  The list of items shows what you’ve searched for, when you searched for it (with the most recent at the top) and includes buttons that allow you to load the search item.  There’s also a ‘clear history’ option too.

The ‘load history’ aspect took a bit of time to get working as the page content depends purely upon the data contained in the ‘hash’ of the page (the part of the URL after the ‘#’.  The things is, when anything in this part of the URL changes it doesn’t trigger a page reload, meaning pressing on the ‘load’ button didn’t actually do anything.  I investigated just refreshing the page content on the client side when the ‘load’ button was pressed, but I already had a lot of code in place to load the data on initial page load based on the values passed in the hash (not just loading the data but prepopulating all of the search boxes) so I thought it would be simpler just to trigger all of this rather than write something new.  It turned out to be pretty easy to trigger a full page load.  First of all I updated the hash with the new value from the ‘load’ button’s ‘href’ attribute using ‘location.replace’ and then I reloaded the page using ‘location.reload’.

The last SCOSYA item on my ‘to do’ list for the atlas was to add the code descriptions to the atlas.  The atlas display options slide-out for the atlas has a series of drop-down lists for selecting one or more attribute codes.  We wanted to ensure descriptions for these codes were also visible to give users a bit more information about what each code is.  Initially I added these as ‘tooltips’ when you hover over an attribute in the drop-down lists in ‘Atlas options’ using the ‘tooltipster’ jQuery plugin (http://iamceege.github.io/tooltipster/) that I’d previously used for the Thesaurus of Old English.  The screenshot below shows how this works. 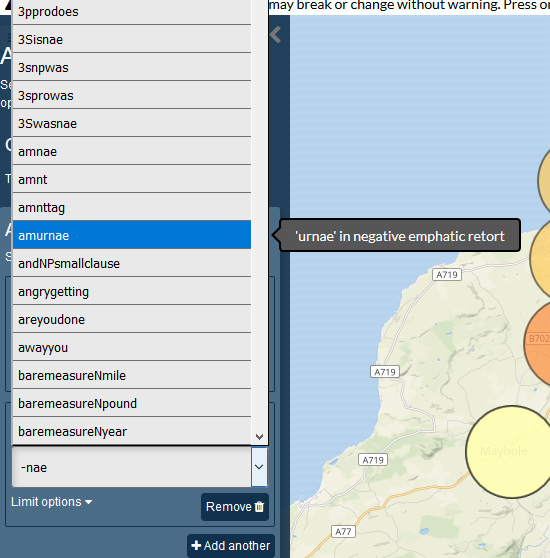 Unfortunately I came to realise that there were a couple of fairly major limitations with these tooltips in the atlas.  As touchscreens don’t have a ‘hover over’ action it means the tooltips won’t work on tablets or smartphones, and I can’t make the tooltips open on click because clicking selects an option in a drop-down list.  Also, the behaviour of drop-down lists is dependent on the operating system and unfortunately tooltips just won’t work in drop-down lists in MacOS, iOS or Android devices.  Also, I realised that the tooltips don’t work when the ‘full screen’ mode is activated either.  I realised that the only way I’d to be able to get around all (or possibly only some) of these limitations would be to get rid of the drop-down lists and replace them with something that’s purely JavaScript based and therefore works independently of the underlying operating system.  I decided to try the jQuery UI Selectmenu (https://jqueryui.com/selectmenu/) first of all, as the jQuery UI library is what I normally use for such widgets.

I would consider the ‘full screen’ mode to be hugely important for the atlas as it makes the interface so much more usable.  Therefore I don’t think we should attempt to use any user interface elements that don’t work in this view.  For this reason I abandoned the idea of adding tooltips to the drop-down lists.  Instead I’ve added in something that is a bit more ‘low tech’ but which works across all operating systems, screens and in ‘full screen’ mode:  When you select an attribute from the list its description then appears below the drop-down list, as the following screenshot shows: 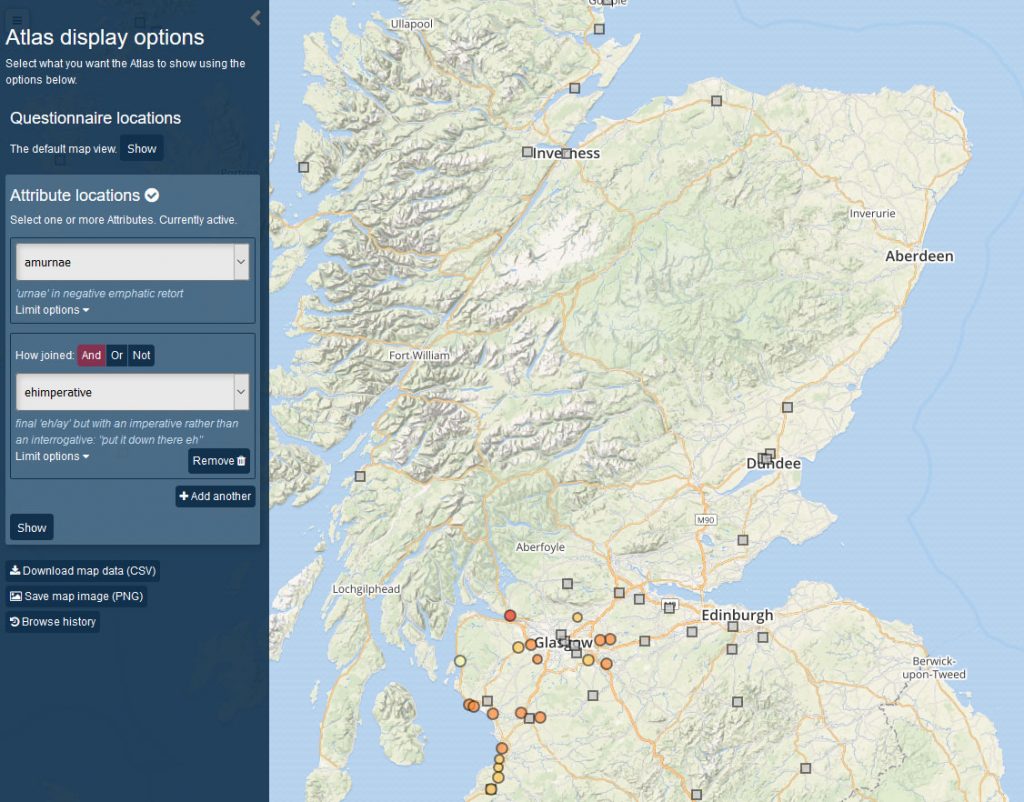 This does unfortunately mean that you can’t see what the description is until you have selected the attribute, but at least it is possible to view the information.  I will also create a link to a full list of attributes and their descriptions that users could consult in conjunction with the atlas interface.  I can always return to this once I start on the public version of the atlas and see if there are any further solutions.  For example, it still might be possible to update the ‘full screen’ view so it does allow non-map elements to be used – possible by ensuring all jQuery UI elements are located somewhere within the map element.

In addition to the above I’ve also reworked the pop-ups that appear on the map so that code descriptions appear.  I’ve also rearranged the individual ratings to group them by their code so the code name and other information isn’t repeated for each rating but appears in a heading above the ratings.

Other than my work for SCOSYA, I spent some time on AHRC review duties and I had a meeting with the Burns people on Wednesday where we discussed the timetable for updates t the website for the next six months or so.  I then spent the rest of the week working on the STELLA Apps.  I’m meeting with Jean Anderson next week to go over the ‘Metre’ app, so in the meantime I’ve decided to return to the two older apps that I never got round to making Android versions of:  ‘English Grammar: An Introduction’ and ‘ARIES’.  I have created Google Play listings for these apps, have generated a new version of the app and have tested this out on my phone.  I have generated icons and screenshots (on my phone, I still need to do this on my Android tablet) and am just about ready to begin the process of building the release versions of the app code.  I’ll hopefully be able to submit the apps to the store next week, if I can get screenshots on my tablet sorted out and the pesky process of building and signing the apps doesn’t take too long.